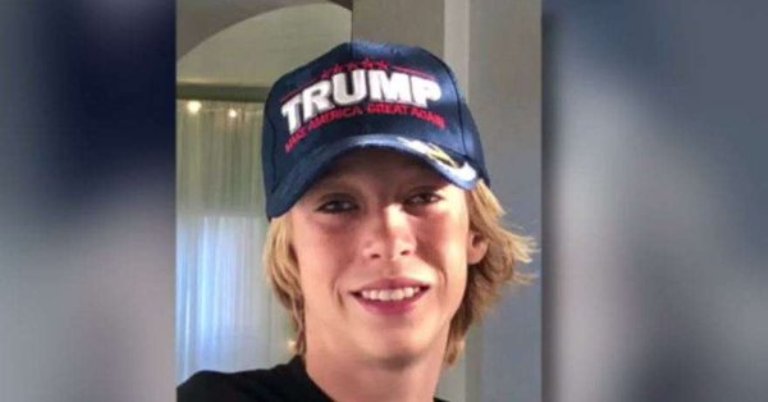 Frequently we receive videos from students who have been berated or even attacked for wearing Trump gear – MAGA hats, flags, t-shirts, etc. Some students watching think it’s funny. The victims are being shamed by teachers or aides …and that’s not funny. It’s verbal abuse. It’s true that hate crimes have increased under Trump- but it’s the hate expressed against Trump supporters that’s out of control.

Gunnar Johansson, 14, of Hidden Oaks Middle School in Martin County, Florida was wearing a Trump hat as he walked into the school bus last Tuesday. He was told by a bus driver aide to remove it, then the aide ripped the hat off his head. It was “hat day” at school and he was allowed to wear it because he and the other students helped raise money for the March of Dimes. Other students on the bus that had hats were not bothered by the aide. The incident was caught on surveillance video.

As the incident occurred, Gunnar’s brother and other students texted their parents and Gunnar’s mother, who went to the school to find out exactly what happened to her son. The school would not let her see the surveillance video until after the investigation by the school district, so she filed a police report. The video is in this tweet:

LISTEN TO THIS: A Martin County school bus aide is under investigation for yelling at a student then grabbing his #Trump #MAGA hat off of his head for 'hat day' at school. The school does not have clear policies against wearing political attire. @WPTV pic.twitter.com/NjxvgZKY3W

Which left Gunner confused because he had done nothing wrong.

“She, like, threatened me with a referral and threatened to turn the bus around. I said ‘write me up, I didn’t do anything wrong’, and then she yanked my hat off. It was crazy.” Gunnar Johansson

Unfortunately, this has become all too common. It is literally verbal abuse of a child, and all perpetrators should be held accountable. Johansson simply wanted to show his support for the President.

Everett Piper wrote in the Washington Times when Conservative Black speaker Star Parker was blocked  from speaking at a college campus:

Abraham Lincoln echoed the same when he admonished, “The philosophy of the schoolroom in one generation will become the philosophy of the government in the next.” Hitler even understood the power of education and the power of ideas when he declared, “Let me control the textbooks and I will control the state!” It is a law as irrefutable as gravity: What is taught today in the classroom will be practiced tomorrow in your culture. Ideas always have consequences.

And these ideas of berating and attacking students will bring consequences far beyond what the left thinks. They are teaching the students by their actions…only it isn’t teaching them what they want.

Here is another example: In this case, it’s another “Spirit Week” where students are reportedly allowed to wear hats. Any hats except MAGA hats, apparently. It’s unclear where this occurred.

Here’s another one that appears to have been attacked by another student acting as some sort of hall monitor (or just general jerk):

A Trump supporting student at Edmond Santa Fe High School had his MAGA flag ripped off of him by another student.

These malicious attacks must be dealt with.