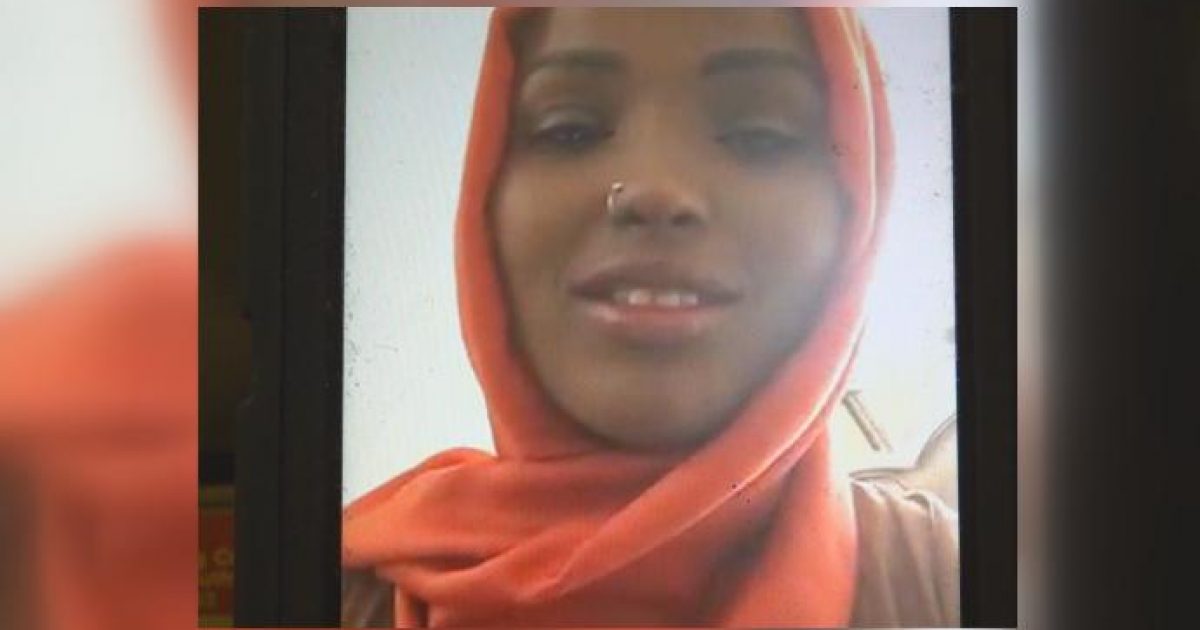 A Grand Forks woman from Somalia was arrested for making terrorist threats against three people by using a knife to cut them up, but instead of owning her threats, which are derived from the Koran, she played the victim, claiming that she is innocent and committed no crime.  Apparently, she doesn’t know that issuing a threat is a crime, and this woman has a criminal history in the US.

According to Valley News Live:

A Grand Forks woman has been charged with terrorizing with a dangerous weapon after she allegedly told someone she was going to slice their neck with a knife.

Court documents say back in November, 26-year-old Hawo Ahmed left her apartment building with a knife and threatened three other people in the parking lot.

One of the victims told police that Ahmed was known for climbing balconies at the apartment complex and breaking into a unit.

Later, Ahmed would give an interview lasting more than 20 minutes in an attempt to give her side of the story that led to her arrest.

“I turned myself in because I know I didn’t commit the crime. I’m innocent and I know I can prove it,” Ahmed said.

Yet, she provided no evidence to KVLY of her innocence.  Isn’t that what an innocent person would be seeking to do knowing that in the public eye she considers herself to being “attacked”?  One would think so.

“I don’t climb balconies. I am not a terrorist. And I’m not a threat to this country. I love this country,” Ahmed said.

While yes, Ahmed has not yet been tried, the fact is that this is often the case, isn’t it?  Cry wolf and then play the victim.  Sodomites, as well as Muslims have done this over and over and over, claiming they are hated and targeted, only to discover that they were the perpetrators of the crimes they accuse others of committing.

Despite her claim that she’s being targeted because of her race and religion, we obtained court documents showing a lengthy criminal history.

Her crimes are traced to Iowa, North Dakota, and Minnesota. They include third degree assault and giving a false name to a peace officer.

In 2011, Ahmed was accused of tampering with a witness in a major federal human trafficking case out of Minneapolis.

Ahmed said she was acquitted in that case.

“I’ve already been convicted in public. They already see me as the guilty Muslim terrorist that needs to be sent back to her country, that doesn’t belong here,” Ahmed said.

“I don’t climb balconies. I am not a terrorist. And I’m not a threat to this country. I love this country,” Ahmed said.

If you love the country, why have you violated its laws?  Why do you hold to a religion that is antithetical to our foundations as a country?

As for public opinion, the public probably thinks she is guilty because she doesn’t have one witness against her or even two, but three witnesses claiming her threats.

She claims she’s hired an attorney, which would not surprise me in the least to discover that the attorney is tied to designated terror group Council on American-Islamic Relations (CAIR).

She is out on bond and facing a felony charge of terrorizing, which carries a maximum five-year prison sentence, the minimum for American ranchers who conduct average fires, and a $10,000 fine.

These are the very kinds of people Rep. Ilhan Omar (D-MN) represents.