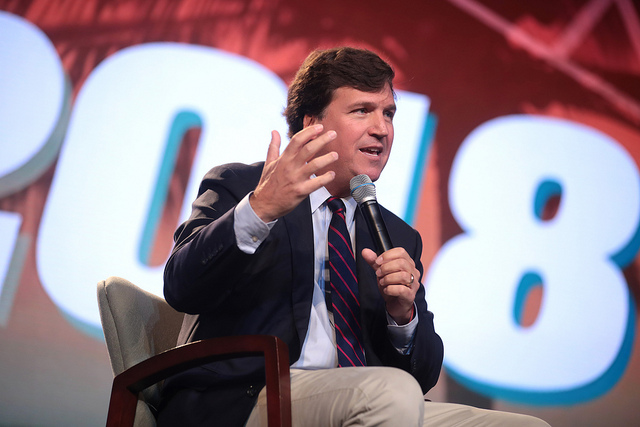 Media Matters launched a new smear against Fox News host Tucker Carlson on Sunday compiling a bunch of out-of-context, heavily edited comments/jokes he made over a decade ago while on shock jock radio with Bubba the Love Sponge.

You can see Media Matters’ manipulative edited video on YouTube if you’re so inclined.

Tucker is refusing to apologize:

Carlson was employed by MSNBC at the time and it caused no controversy.

Bill Maher made similar comments in the past and was defended by the left:

Does anyone believe for a second these leftists give a s*** what Tucker Carlson said on shock jock radio with Bubba the Love Sponge so many years ago?

They want to take him down because he represents a threat to the establishment.

They don’t like the fact he stands up against the US war machine and speaks out against mass immigration.

They don’t like the fact he gives honest leftists like Tulsi Gabbard and Andrew Yang a platform on national television.

That’s why some loser went through potentially hundreds of these old interviews and listened to them in their entirety just to find some comments/jokes they could take out of context to attack him over.

Someone went through 5 years of radio appearances to get the worst things Tucker Carlson said out of context for one reason. To destroy his career and end his show. It is not about outrage. It is about hunting to find something to take out an enemy. They do it all the time.

I always thought there was no worse job than being the guy who writes parking tickets.
But apparently there is an entire field of people who get paid to go through of radio w/ Tucker Carlson to find something controversial they can use to destroy his career https://t.co/WGiZn86aIo

Liberals aren’t outraged about inappropriate jokes Tucker Carlson told years ago. They’re thrilled. They couldn’t be happier that they found this stuff. Their excitement is palpable. So let’s stop pretending that this is anything more than a game. Nobody is authentically angry.

I haven’t listened to the Tucker Carlson tape, why would I? Media matters defended James Gunn. How can anyone even trust the audio? Look at how Covingtongate was edited. I don’t believe anything from far left smear groups. Won’t bother to even listen to team James Gunn.

Leftists: Let's wring our hands over Tucker Carlson's offhand joke about a 13 year old male rape victim on a shock jock radio station in the mid-2000s.

Also leftists: "Yaaas kween slaaay" to celebrate a 10 year old crossdressing boy who strips at a gay strip club in 2019.

They’re trying to destroy this man because of the threat he represents to the establishment and their billionaire globalist bosses. They can’t argue in favor of prog-globalism and defend brainwashing kids with transgender propaganda so they just dig up old comments they can misconstrue and take out of context.

For comments made on the “Bubba The Love Sponge” show. Obviously a serious policy show where no satire would be made.

The left is not going after @TuckerCarlson for any reason other then he’s effective at destroying their agenda. That’s what they do. https://t.co/ExtAY86q5i

A search of their archives shows they defended Virginia Governor Ralph Northam’s defense of infanticide and didn’t even write about his blackface-KKK controversy (other than to attack one Fox News employee for suggesting Northam should “dig in” and not resign [which was also taken totally out of context]).

These dishonest hacks don’t give a damn about anything other than helping their globalist masters seize power.

Kudos to Tucker Carlson for refusing to issue a groveling apology and instead standing strong in the face of these dishonest smears.