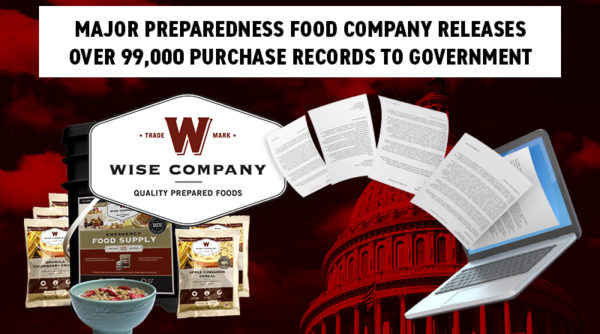 A class action lawsuit against Wise Company, a survival and emergency food storage company, was filed on February 15, 2017 for “unlawful, unfair, and deceptive advertising and business practices.” Last year, the company agreed to settle the suit, and is expected to announce the settlement on its website by the end of business today.

The class action, known as Miller v. Wise Company Inc., U.S. District Court, Central District of California, Case No. 5:17-cv-00616-JAK-PLA, alleges that on its website and packaging, Wise made misrepresentations and omitted material information about how long its Long-Term Food Kits would last and how many people they would feed. Customers who brought the case (the “Plaintiffs”) allege that as a result, “customers were induced to pay more for those products than  they otherwise would have.”

The Daily Sheeple can report that, not only did Wise Company allegedly mislead consumers about the nutritional content of their products, it appears that the company handed over highly confidential consumer data to the government – not once, but twice – during the proceedings.

The following phrases were all used in describing the complaint:

Likely to deceive members of the general public

HERE ARE THE LAWSUIT’S CLAIMS, DIRECTLY FROM THE COURT DOCUMENTS:

Wise Company fails to disclose that if the consumer in fact eats the number of prescribed servings each day necessary to make the food kits last for the advertised period of time, the consumer will effectively starve or suffer adverse health effects given that the food kits provide drastically fewer calories and nutrients than are needed to adequately sustain adults for the advertised periods of time.

Wise Company’s long-term and emergency food kits provide less than half the daily calories necessary for an average adult to survive.

Consequently, a person who credits Wise Company’s representations and attempts to survive on one of its “Long-Term Food Kits” for the specified period of time faces serious physical and mental health risks, including dehydration, hypothermia, hypotension, impaired renal and liver function, depression, and impaired cognition.

Some of the kits sold have an average as low as only 453 calories per day, a paltry amount of food by any measure, and certainly not enough to sustain an individual in the kind of emergency situation for which Wise Company foods are marketed.

In fact, prisoners in Auschwitz were provided more calories than Wise food storage has consistently given their customers.

Perhaps worse than the alleged deception regarding the nutritional content of the food is the appearance that proprietary, highly confidential customer sales data has been disclosed in the case. As many as 99,405 purchase records have already been handed over to the government.

Wise insists they have done nothing wrong, however have agreed to settle this claim, turning over their customer information as a result.

Wise claims that because customers have likely not actually had to depend on the food no damages can be claimed in their official respones:

“Wise expects discovery will show that Plaintiffs have not actually consumed any of the products they purchased and, therefore, have suffered no injury in fact whatsoever, but instead merely exchanged one form of property (money) for another (food).”

Wise has produced about 13,000 pages of documents as well as summary sales information (which it has designated confidential) showing the number of individuals who purchased each of the Long-Term Food Kits, the purchase channel (Wise Website, over the phone, through a third party, etc.), the number of products sold, and the price of the products during the relevant years.

While documents submitted during the Discovery phase of the proceedings designated their customer list as confidential, this only prevents members of the general public from accessing it under Freedom of Information – the government still has it.

Members of the class on average are eligible for a refund of $15-$1,400 per eligible product purchased during the class period.

The class website is up and running and can be viewed here: Miller v. Wise Company Inc. Settlement Website

If all members of the class request their refund, total liability to Wise is well over $2,000,000 – money that they will ultimately recoup from their customers – the very people whose trust they were alleged to have violated in the first place.

This isn’t the first time Wise food storage has had trouble – a shocking report from 2015 claimed that at that time, Wise foods weren’t being packaged in a manner consistent with long term food storage.

AS OF NOW, WISE IS NOT CHANGING THEIR PRODUCTS OR THEIR ADVERTISING PRACTICES

As part of the settlement agreement, Wise has been allowed to NOT change their advertising practices until they sell all of their existing inventory. We have been told by a Wise ex-employee familiar with the case that Wise has purchased large amounts of food inventory to allow them to “milk it as long as possible.”

As of the time of this story Wise Company is still selling kits by time frame that have unsafe levels of calories.

PLAINTIFFS’ MEMORANDUM IN SUPPORT OF UNOPPOSED MOTION FOR PRELIMINARY APPROVAL

ORDER RE MOTION FOR CLASS CERTIFICATION (DKT. 24) AND MOTION FOR PRELIMINARY APPROVAL OF CLASS ACTION SETTLEMENT

ORDER GRANTING EXTENSION OF DEADLINES AND RESCHEDULING HEARING DATE: “Defendant shall provide the Eligible Product purchase history of each of its Known Customers”

DECLARATION OF SCOTT WHITING IN SUPPORT OF NOTICE OF REMOVAL OF ACTION FROM STATE COURT BY DEFENDANT WISE COMPANY, INC.

MASS HYSTERIA: Deranged Mob Chase Person Out of Grocery Store in New York for Not Wearing a Mask
May 26th, 2020 Big League Politics