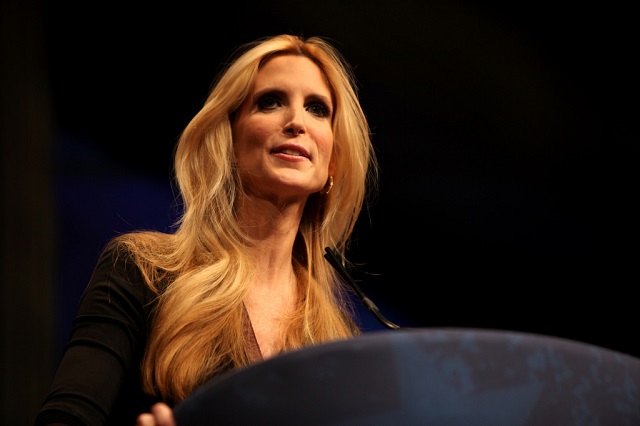 Ann Coulter on Monday reacted to President Trump attacking her as a “wacky nut job” over the weekend on Twitter.

“It’s frustrating,” Palm Beach resident Coulter said at a Forum Club of the Palm Beaches luncheon. “I can’t talk to Trump detractors because, as the subtitle to my last book indicated, they’re insane. I can’t talk to the Trump flatterers because they think as soon as it comes out of his mouth, it has happened. No, he’s an excellent talker. It’s just when it comes to doing anything that he falls down on the job.”

Rivaling Trump as a target of Coulter’s ire was the media.

“Trump may be a shallow, narcissistic conman, but that doesn’t mean the media are not the enemy of the people. Both things can be true,” said Coulter. She later said the one positive of Trump’s presidency could be the “total destruction of the lying media.”

[…]Coulter brushed off the president’s criticism in an interview with The Palm Beach Post after her Forum Club remarks.

“I don’t know why he doesn’t just ignore me. He doesn’t mind ignoring the rest of his base,” Coulter said.

Coulter retweeted the above article along with her quote early Monday:

“I don’t know why he doesn’t just ignore me. He doesn’t mind ignoring the rest of his base" https://t.co/vEfXnWKc1s

She also retweeted this article from the Washington Times showing how ICE officers are growing similarly frustrated with the fact “he has failed to follow through on his get-tough promises.”

“You frequently speak publicly of the great public safety work ICE is doing under your leadership. To be direct Mr. President — the rhetoric doesn’t match reality and we hope that this letter shows you the complete and total nonsense that is really taking place under the Trump Administration on the southern border,” ICE officers said in a recent letter to the president.