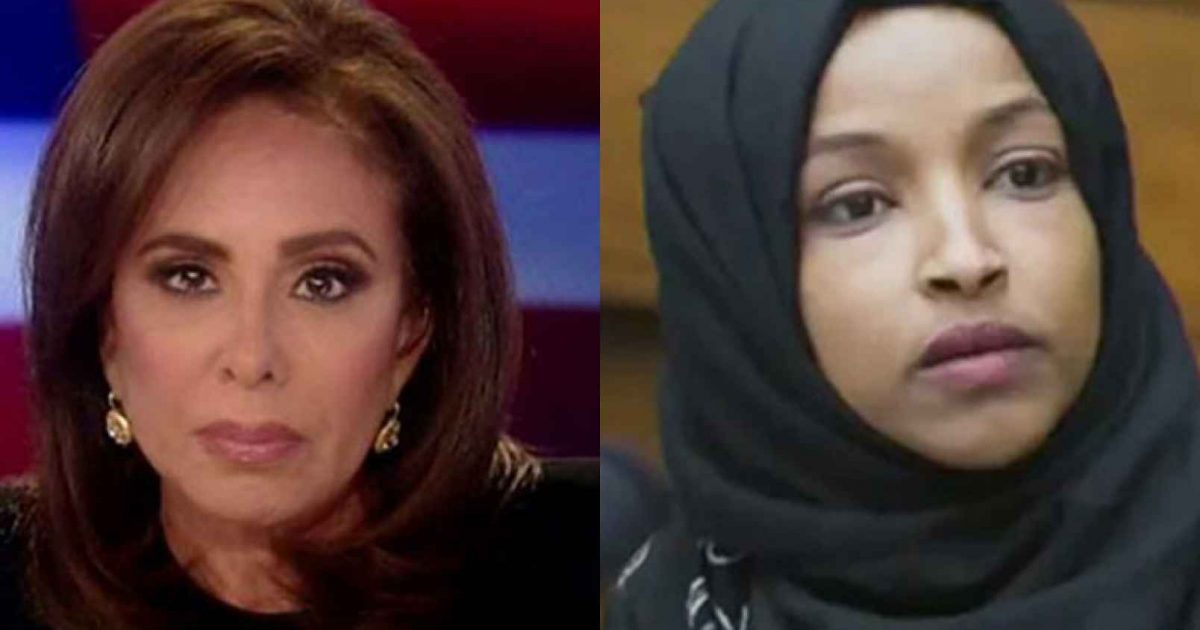 Breitbart reported Monday that the Fox News Channel “condemned host Jeanine Pirro’s remarks on Rep. Ilhan Omar’s (D-MN) use of a hijab and said the issue has been dealt with directly.” Sounds serious. But what Pirro actually said was something Fox should have been applauding, if it hadn’t already become just another establishment network.

Pirro said: “Think about this: She’s not getting this anti-Israel sentiment doctrine from the Democrat Party. So if it’s not rooted in the party, where is she getting it from? Think about it. Omar wears a hijab, which according to the Quran 33:59, tells women to cover so they won’t get molested. Is her adherence to this Islamic doctrine indicative of her adherence to Sharia law, which in itself is antithetical to the United States Constitution?”

Predictably, the Hamas-linked Council on American-Islamic Relations (CAIR) called on Fox to fire Pirro. Like a shark, CAIR can smell blood in the water: instead of defending Pirro for asking a perfectly legitimate question, Fox immediately reacted as if Pirro had stolen Barack Obama’s parking space, denouncing Pirro’s words with stern self-righteousness: “We strongly condemn Jeanine Pirro’s comments about Rep. Ilhan Omar. They do not reflect those of the network and we have addressed the matter with her directly.”

Pirro, issued a clarification, to little effect: “I’ve seen a lot of comments about my opening statement from Saturday night’s show and I did not call Rep. Omar un-American. My intention was to ask a question and start a debate, but of course because one is Muslim does not mean you don’t support the Constitution. I invite Rep. Omar to come on my show any time to discuss all of the important issues facing America today.”

Fox is increasingly slipping into the Leftist echo chamber. It is terrified of discussing these issues. A few years ago, Jeanine Pirro contacted me and was going to have me as a featured guest on a special show about Sharia. She was very excited about it, and all the arrangements were made to fly me in and get me set up in the studio. Then at the last minute, everything was canceled — it was clear that Fox executives had told her she was venturing into forbidden territory. They willingly kowtow to the Southern Poverty Law Center’s defamation campaign targeting foes of jihad terror and Sharia oppression of women and others. But last night, Pirro ventured off the reservation again, daring to suggest that Ilhan Omar’s hijab showed her to be Sharia-compliant.

No in both cases, because in both cases the headwear in question is not part of a larger system that is incompatible with Constitutional rule. However, the hijab is part of such a system, and that’s all Pirro was saying. Fox should not have rebuked her, but this is the age of pandemic cowardice, so it was likely unrealistic to expect anything else.

Ilhan Omar herself, not surprisingly, was happier with Fox News than she has probably ever been, and tweeted: “Thank you, @FoxNews. No one’s commitment to our constitution should be questioned because of their faith or country of birth.”

But that wasn’t really what Pirro did. Pirro suggested that Omar’s anti-Semitism came from Sharia. And indeed, Sharia is indeed inveterately anti-Semitic: the Qur’an demonizes the Jews in numerous ways. It depicts the Jews as inveterately evil and bent on destroying the well-being of the Muslims. They are the strongest of all people in enmity toward the Muslims (5:82); they fabricate things and falsely ascribe them to Allah (2:79; 3:75, 3:181); they claim that Allah’s power is limited (5:64); they love to listen to lies (5:41); they disobey Allah and never observe his commands (5:13). They are disputing and quarreling (2:247); hiding the truth and misleading people (3:78); staging rebellion against the prophets and rejecting their guidance (2:55); being hypocritical (2:14, 2:44); giving preference to their own interests over the teachings of Muhammad (2:87); wishing evil for people and trying to mislead them (2:109); feeling pain when others are happy or fortunate (3:120); being arrogant about their being Allah’s beloved people (5:18); devouring people’s wealth by subterfuge (4:161); slandering the true religion and being cursed by Allah (4:46); killing the prophets (2:61); being merciless and heartless (2:74); never keeping their promises or fulfilling their words (2:100); being unrestrained in committing sins (5:79); being cowardly (59:13-14); being miserly (4:53); being transformed into apes and pigs for breaking the Sabbath (2:63-65; 5:59-60; 7:166); and more. They are under Allah’s curse (9:30), and Muslims should wage war against them and subjugate them under Islamic hegemony (9:29).

“O Prophet, tell your wives and your daughters and the women of the believers to bring down over themselves their outer garments. That is more suitable that they will be known and not be abused. And ever is Allah Forgiving and Merciful.” (Qur’an 33:59)

“Narrated `Aisha (the wife of the Prophet): `Umar bin Al-Khattab used to say to Allah’s Messenger (ﷺ) “Let your wives be veiled” But he did not do so. The wives of the Prophet (ﷺ) used to go out to answer the call of nature at night only at Al-Manasi.’ Once Sauda, the daughter of Zam`a went out and she was a tall woman. `Umar bin Al-Khattab saw her while he was in a gathering, and said, ‘I have recognized you, O Sauda!’ He (`Umar) said so as he was anxious for some Divine orders regarding the veil (the veiling of women.) So Allah revealed the Verse of veiling. (Al-Hijab; a complete body cover excluding the eyes).” (Bukhari 79.14.6420)

Wearing hijab is a sign that one accepts these imperatives. That is not necessarily true, as lots of women of all perspectives wear headscarves, but when a Muslim woman wears hijab, it’s reasonable to surmise that she accepts the Qur’an and Sunnah, the sources of Sharia. Sharia denies the freedom of speech, the freedom of conscience, the equality of rights of women, and the equality of rights of non-Muslims. Wearing hijab is a sign of adherence to Sharia.

So what did Judge Jeanine Pirro say that was wrong about Ilhan Omar? She asked questions that need to be asked. Fox should be apologizing to Pirro, not Omar.