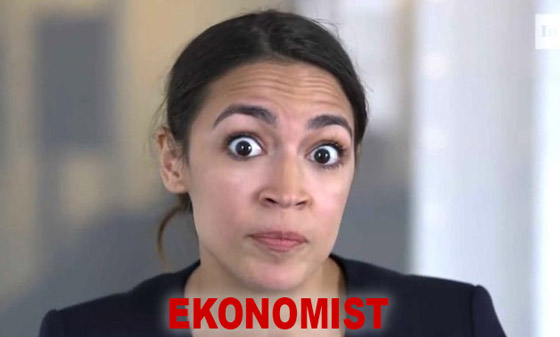 (True Conservative Pundit) This writer used to think one of the dumbest politicians ever to draw breath was Nancy no-mind Pelosi.  I have officially changed my mind.  The dumbest (there is a lot of competition out there) individual in all of Congress has got to be Alexandria Ocasio Cortez.  This is no joke, and I am not trying to be funny, AOC’s ideas are not only ignorant and stupid quite often, but they are also dangerous.

Recently, Lyle Rapacki brought us the news that AOC is in effect a created socialist plant, a “made woman” if you will, in the context that a certain group(s) of people were looking for the perfect candidate to front.

Well, my question is: Couldn’t these people have found someone out of the thousands of people that applied to be this new candidate; someone who possesses even a small amount of intelligence?

AOC is the N.Y. Congressional Rep. who majored in economics; she must have slept through class.

This same economics major thinks that Medicaid (state run socialized medicine) for all is a good idea, and that it is cheaper then our current medical system.  Ummm, that would be a solid no.

Recently AOC also said that Americans should be “excited” about “being automated out of work.”

Let’s not forget the sheer genius of AOC’s Green New Deal that among other things would give free money to those who don’t want to work.  After all, it is your responsibility as an American to carry those who simply don’t feel like working on your back, right?

Oh, and no more flying, no more cars, and no more steaks for dinner either.  Did I forget to mention that if the sun is not shining, and/or the wind is not blowing – no more power either?

The best part of this deal?  The Green New Deal would ONLY cost about 93 Trillion dollars to implement.

Now we get to the latest release in the AOC soap opera, I am stupid and proud of it.  Check out one of AOC’s latest tweets:

Cost of forgiving all student loans in America: ~$1.5 Trillion

When people say that there isn’t “enough” to do these things, what they mean is they don’t *want* to do them.

In the first place the GOP tax cut is no scam, simply because you AOC are too ignorant to understand it, does not make it so.  Second and more importantly, a tax cut is NOT a cost.  A tax cut means less revenue coming in, but that is in no way a countable cost.  The implication here is of course that the money from the GOP tax cut could be taken and applied to paying off student loans.  The problem with this idea is that there is not any actual money to use.

If taxes are cut, then people get to keep more of their own money, so there is no money to be repurposed.  AOC apparently does not grasp this concept.

I made an awful call as a kid, lived on campus, and walked out of NU $60k in debt, all because of private school room & board in a big city.

I paid every penny back, with interest, 10 years early.

Do I get my debt forgiven, too, or do I get to pay the Taking Responsibility Tax?

I paid back every dollar of my student loans. It's called taking responsibility for one's debts. It's what grown-ups do

I agree with 1/2 of this. If you cancel their debt I want my debt canceled. I didnt go to college bc I couldn’t afford it. They did and now you are saying I should pay for their college? Why? Bc debt is hard to pay off? Yes, it is. Get a second and third job like I have.

It’s the price of education, it’s not easy but it’s a choice people make, it’s not like he was forced to do it. He chose to, forgiving debts is just another way we’ll make people lazy and allow people to get away with horrible financial decisions with no consequences.

Yes let’s teach kids that when you borrow money you don’t have to return it. What a great lesson. I paid back all my loans. Sure I had a small amount compared to others but you still borrowed the money. We need to teach these ADULTS life lessons such as this.

There were of course the usual morons who think AOC is right, the same ones who think socialism is a good idea, and that capitalism is evil and criminal.

Socialism has not ever worked anywhere it has ever been tried – period.  Just because AOC, Bernie Sanders and others are convinced that they have a different methodology of socialism that will work, does not make it so.

What is really and truly scary is that this incredibly naïve, ignorant and even at times outright stupid (AOC) woman is one of the leaders in Washington, and not only that but AOC is a rising star in the Democrat Party.

America had better wake up and start taking the Politicrats actions seriously, and it had better happen soon – or America will find itself under the tyrannical iron-fisted rule of the Democrats, disguised as Democratic Socialism.  If the Politicrats are not reined in soon, it might not be possible to stop their socialist agenda at all.