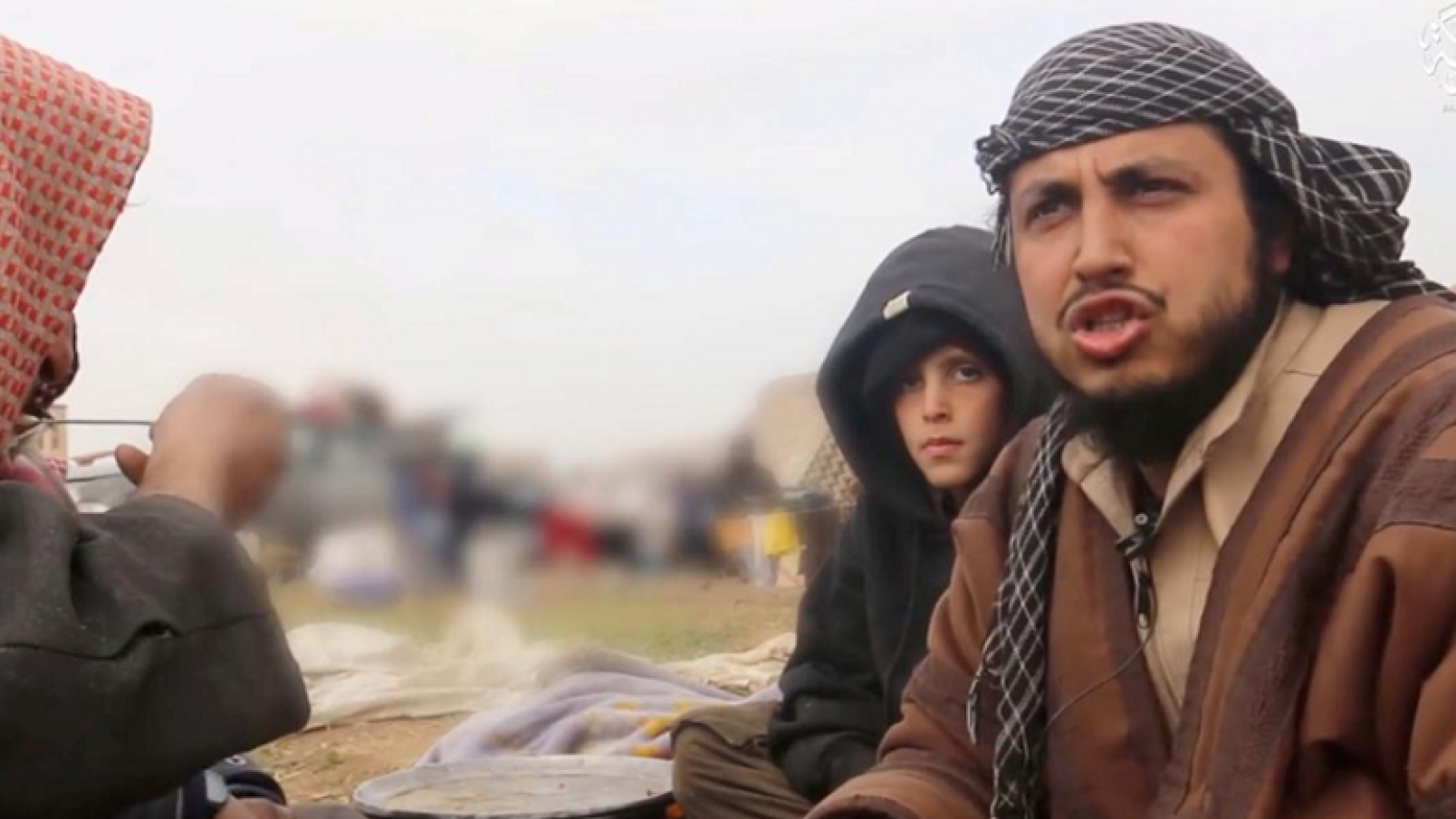 In a new video, an Islamic State (ISIS) spokesman named Abu Abd al-Azeem, “whose speech,” noted Reuters, “is peppered with Koranic recitations,” complained about the bad rap his cuddly group has gotten. “Why are we bombed by planes,” he asked plaintively, “why do all the nations of the unbelieving world come together to fight us?…What is our guilt? What is our crime? We (just) wanted to apply the sharia of Allah.”

Indeed. And now, in light of that statement, here are some questions that mainstream counterterror analysts should ponder deeply: did the Islamic State actually apply Sharia? ISIS is routinely dismissed as un-Islamic, but what exactly did they do that cannot be backed up by specific citations from the Qur’an and Hadith? And if the Islamic State just wanted to apply Sharia, and Sharia is entirely benign and compatible with Western values, as Western analysts also regularly insist, then why did the whole world regard the Islamic State as a criminal entity that must be destroyed? Why was it not welcomed into the family of nations, alongside other Sharia regimes including Saudi Arabia and Iran?

The cognitive dissonance arises, of course, from the assurances we received from the likes of Barack Obama, Joe Biden, John Kerry, David Cameron, and virtually every other authority in the Western world that the Islamic State was not Islamic, and indeed, had nothing whatsoever to do with Islam.

This reached absurd levels during the Obama administration. “ISIL does not operate in the name of any religion,” said Obama’s Deputy State Department spokesperson Marie Harf in August 2014. “The president has been very clear about that, and the more we can underscore that, the better.” Yet Abu Abd al-Azeem’s words above make it abundantly clear, as does every other statement ever issued by ISIS, that the group believes itself to be operating in the name of Islam, and indeed, to embody the fullness of Islamic teaching.  In June 2014, a video circulated of a masked Islamic State commander telling a cheering crowd: “By Allah, we embarked on our Jihad only to support the religion of Allah….Allah willing, we will establish a state ruled by the Quran and the Sunna….All of you honorable Muslims are the soldiers of the Muslim State.” He promised that the Islamic State would establish “the Sharia of Allah, the Quran, and the Sunna” as the crowed repeatedly responded with screams of “Allahu akbar.”

Everything ISIS did in its heyday was clearly Islamic. The celebrated beheadings were implementation of a Qur’anic command. The Qur’an says straightforwardly, “When you meet the unbelievers, strike the necks” (47:4).

But surely the Islamic State’s practice of kidnapping Yazidi and Christian women and pressing them into sex slavery was un-Islamic, no? No. The Qur’an says that in addition to wives (“two or three or four”), Muslim men may enjoy the “captives of the right hand” (4:3, 4:24). These are specified as being women who have been seized as the spoils of war” (33:50) and are to be used specifically for sexual purposes, as men are to “guard their private parts except from their wives or those their right hands possess” (23:5-6).

If these women are already married, no problem. Islamic law directs that “when a child or a woman is taken captive, they become slaves by the fact of capture, and the woman’s previous marriage is immediately annulled.” (Reliance of the Traveller, 09.13)

ISIS knew this. In the October 2014 issue of its Dabiq magazine, it stated: “Enslaving the families of the kuffar [non-believers] and taking their women as concubines is a firmly established aspect of the Sharia.” In a November 2014 video of gleeful Islamic State jihadis laughing and bantering at a sex slave auction, one of the fighters declares: “Today is the slave market day. Today is the day where this verse applies, ‘Except with their wives and the (captives) whom their right hands possess, for (then) they are not to be blamed.” That is Qur’an 23:5-6, which tells Muslim men to “guard your private parts except with your wives and the captives of your right hand.”

On December 15, 2014, the Islamic State released a document entitled “Clarification [regarding] the Hudud” – that is, punishments Allah specifies in the Qur’an. This was essentially the Islamic State’s penal code, and every aspect of it was drawn from Islamic teaching.

It mandated death for blasphemy against Allah or Muhammad. The document specified that murder and stealing would be punished by death and crucifixion – that is, crucifixion of the dead body. Murder alone would be punishable by death. Stealing as part of banditry would be rewarded with the amputation of the right hand and the left leg, and terrorizing people would result in exile.

All this was derived from this Qur’anic verse: “Indeed, the penalty for those who wage war against Allah and His Messenger and strive upon earth corruption is none but that they be killed or crucified or that their hands and feet be cut off from opposite sides or that they be exiled from the land. That is for them a disgrace in this world; and for them in the Hereafter is a great punishment, except for those who return before you apprehend them. And know that Allah is Forgiving and Merciful.” (5:33-34)

Blasphemy against Islam was likewise punishable by death, also as per the Qur’an:

“If they violate their oaths after pledging to keep their covenants, and attack your religion, you may fight the leaders of paganism – you are no longer bound by your covenant with them – that they may refrain” (Qur’an 9:12)

Adulterers were to be stoned to death; fornicators would be given 100 lashes and exile. Stoning was in the hadith – a hadith in which the caliph Umar said it had once been in the Qur’an:

‘Umar said, “I am afraid that after a long time has passed, people may say, “We do not find the Verses of the Rajam (stoning to death) in the Holy Book,” and consequently they may go astray by leaving an obligation that Allah has revealed. Lo! I confirm that the penalty of Rajam be inflicted on him who commits illegal sexual intercourse, if he is already married and the crime is proved by witnesses or pregnancy or confession.” Sufyan added, “I have memorized this narration in this way.” ‘Umar added, “Surely Allah’s Apostle carried out the penalty of Rajam, and so did we after him.” (Bukhari 8.86.6829)

Sodomy (homosexuality) was also to be punished by death, as per Muhammad’s reported words: “If you find anyone doing as Lot’s people did, kill the one who does it, and the one to whom it is done.” (Sunan Abu Dawood 38:4447)

The hand of the thief would be amputated: “The thief, the male and the female, amputate their hands in recompense for what they committed as a deterrent from Allah. And Allah is Exalted in Might and Wise.” (Qur’an 5:38)

Those who drank alcohol would be lashed 80 times, also as per a hadith:

“Abu Huraira said, ‘A man who drank wine was brought to the Prophet. The Prophet said, “Beat him!” Abu Huraira added, “So some of us beat him with our hands, and some with their shoes, and some with their garments (by twisting it) like a lash, and then when we finished, someone said to him, ‘May Allah disgrace you!’ On that the Prophet said, ‘Do not say so, for you are helping Satan to overpower him.’” (Bukhari 8.86.6777)

Slanderers would likewise get eighty lashes:

“And those who accuse chaste women and then do not produce four witnesses – lash them with eighty lashes and do not accept from them testimony ever after. And those are the defiantly disobedient.” (Qur’an 24:4)

Those caught spying for the unbelievers would be put to death:

“Let not believers take disbelievers as allies rather than believers. And whoever does that has nothing with Allah, except when taking precaution against them in prudence. And Allah warns you of Himself, and to Allah is the destination.” (Qur’an 3:28)

Apostates would also be put to death:

“They wish you would disbelieve as they disbelieved so you would be alike. So do not take from among them allies until they emigrate for the cause of Allah. But if they turn away, then seize them and kill them wherever you find them and take not from among them any ally or helper.” (Qur’an 4:89)

So did the Islamic State just try to implement the Sharia? Yes. Western analysts and policymakers should ponder the implications of that fact. But they won’t.