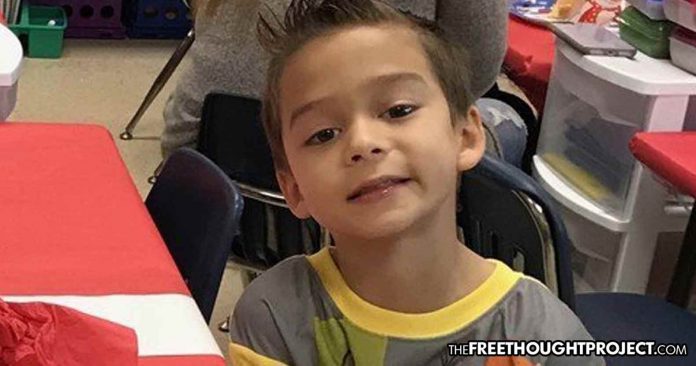 Bexar County, TX — In December 2017, the Free Thought Project reported on the tragic death of 6-year-old Kameron Prescott whose life was stolen from him when police opened fire on an unarmed woman suspected of stealing a car. In June, the mother of the little boy who was gunned down by police found out that the cops who killed her son all went back to work. And this week, the family has found out that none of the officers responsible for the death of her son will face charges.

Last year, the Bexar County District Attorney provided the department with clearance letters, allowing the deputies to report to full duty after being on administrative leave during the investigation. After a six month paid vacation for killing a child, the cops went back to work.

Now, a Bexar County grand jury decided that all the officers involved in the boy’s death will face no charges.

“I respect and agree with the decision of the grand jury in this case,” Bexar County District Attorney Joe Gonzales said in an emailed statement Wednesday.

In December, the incident received widespread coverage as the mainstream media reported that Kameron was hit with a “stray bullet.” However, this bullet was anything but “stray.” The shot that killed young Kameron was deliberately fired at an unarmed woman.

The officers’ guns did not accidentally go off. Deputies John Aguillon, George Herrera, Jesse Arias and Johnny Longoria all deliberately shot at an unarmed woman, and their fear, poor judgment, and carelessness led to the death of an innocent child.

For over a year, the family has been asking for justice to be served. And now, it looks like that will never come.

Adding insult to death, Rubi had to find out in the media that the cops who killed her son when they shot and killed an unarmed woman, would be returning to work.

“I just wish they would’ve had compassion, that they would’ve had the courtesy to tell me what is going on before they told the rest of the world. I gave birth to my child you would think that I’d be able to get told something like this first before the media or anyone else,” Prescott said last year.

Although Kameron didn’t live in the home in which he was gunned down by police, it was his father’s house and he was visiting him after getting out of school early on that fateful Thursday for Christmas break.

“If it is the police, we hope that you hold your people accountable,” Gonzales said. “I am sorry that it comes to this, but y’all are people just like us at the end of the day. Y’all deserve to be held accountable. It is a Constitutional right. Y’all just killed a little boy, it was y’all. There’s no weapon, so it wasn’t that lady.”

Had a regular citizen opened fire on an unarmed woman and killed an innocent child in the process, rest assured that they would be sitting in a jail cell right this moment. However, because the people who killed this unarmed woman and child are police officers, there will be no #JusticeForKameron.

Naturally, the sheriff’s department claimed the officers acted appropriately—by opening fire on an unarmed woman—and killing her and a child in the process. They are claiming to have seen the now deceased suspect—30-year-old Amanda Jones—carrying a pistol prior to finding her breaking into Kameron’s father’s house. However, no such pistol was found.

“In my opinion, it’s a tragic accident that led to the death of this young man,” Sheriff Javier Salazar said at a news conference at the time. “But again preliminarily it appears that policies and procedures (on use of force) were complied with.”

According to Salazar, it is apparently proper procedure to open fire on an unarmed woman as she flees police and not care about the mobile home behind her in a neighborhood full of children out for Christmas break.

Although they didn’t originally report it, police then claimed that Jones was holding an 8-inch “dark pipe,” which caused the multiple armed officers to all open fire on her with complete disregard for everyone’s life who happened to be near her—including 6-year-old Kameron Prescott.

The officers were wearing body cameras showing the shooting, but the department refuses to publicly release the footage.

The officers returning to work after killing a little boy should come as no surprise especially given the fact that there were 20 Bexar County Sheriff’s deputies arrested in 2018 for misconduct. One of those deputies was Jose Nunez, whose arrest on charges of child sex assault shocked the nation. The 10-year veteran is accused of sexually assaulting a 4-year-old girl and threatening to have her mother, who is undocumented, deported if authorities learned of the abuse.

Kameron Prescott was the 1,152nd person to be killed by police in 2017. He was also the youngest.