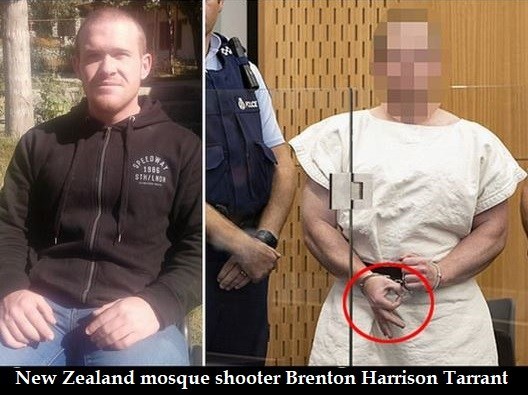 On March 14, 2019, New Zealand sustained its deadliest mass shootings in modern history when a gunman, 28-year-old Brenton Tarrant, killed 50 people and injured another 50 at Al Noor Mosque and the Linwood Islamic Centre in Christchurch, New Zealand. The media immediately identified Tarrant as that most noxious of all monsters — “an alt-right affiliated white supremacist”. (Wikipedia)

The shootings began at the Al Noor Mosque in the suburb of Riccarton at 1:40 p.m., and continued at the Linwood Islamic Centre at about 1:55 p.m.

Tarrant recorded and streamed the first attack on Facebook Live.

As reported by ZeroHedge, copies of Tarrant’s livestream, along with his lengthy manifesto, began to rapidly circulate on various file-hosting sites following the attack, which were quickly scrubbed from mainstream platforms such as Facebook, YouTube, Twitter and Scribd. YouTube went so far as to intentionally disable search filters so that people cannot find Christchurch shooting materials — including footage of suspected multiple shooters as well as the arrest of Tarrant and other suspects.

On March 16, 2019, two days after the shootings, freelance Ohio-based journalist Nick Monroe retweeted a message from WellingtonLive, a news media company, that the New Zealand government had banned the mosque-shooting video. New Zealanders are told not to download the video. Anyone found to “knowingly” possess a copy of the video will face up to 10 years in prison; anyone who shared the video will get up to 14 years in prison. Corporations (such as web hosts) face an additional $200,000 ($137,000 US) fine under the same law.

Why would the New Zealand government take such extreme measures to prevent its citizens from seeing the video?

As of the writing of this post, the video can be viewed on BitChute, the file-sharing video hosting service. Click here.

At the 5:57 mark of the video, the gunman gets out of his car, whistling the brisk and cheerful tune of the British Grenadiers, the band of Her Majesty’s Coldstream Guards. He retrieves a semi-automatic rifle from the trunk of the car, and proceeds to walk into the compound of Al Noor Mosque.

The shooter continues shooting as he walks down the hall, into rooms as he passes them, and in two large rooms where more people are assembled. The victims each immediately falls to the ground like a sack of sand.

Back to the mosque gunman’s video.

The gunman repeatedly returns to the hallway and rooms to shoot the people who had already fallen.

At the 8:56 mark, the gunman is outside the mosque’s front gate and begins shooting down the street. At the 9:06 mark, the gunman turns around and shoots down the street in the other direction. Curiously, the video shows shell casings being ejected from the semi-automatic, but the casings then disappear into thin air. No shell casing is on the ground.

The gunman then returns to his car and exchanges the anti-automatic rifle for another. He walks back into the mosque, past the bodies of two victims in the doorway.

Remember the screenshot at the 8:45 mark in the video of the two bodies in the doorway when the gunman left the mosque, showing no blood?

Now, there is blood.

Between the 8:45 and 10:32 marks, in one minute 47 seconds, suddenly there’s a pool of blood at the feet of the first victim and the head of the second man.

The gunman walks down the hallway and into rooms, shooting at the bodies that are already crumpled on the floor to make sure his victims are really dead.