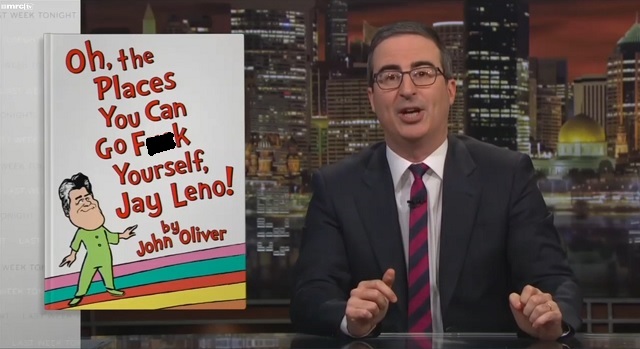 In an act of petty retaliation, Oliver had his staff dig up every old Leno joke they could find poking fun at Monica Lewinsky and edit them all together while cutting out much of the laughter. Oliver played the compilation on his show Sunday and then cried about how his jokes were supposedly not funny and deeply offensive.

Remember, this is supposed to be a comedy show:

Here’s the transcript via NewsBusters:

JOHN OLIVER: If you’re hazy on the Monica Lewinsky story, at 22, she and president Clinton began a relationship that, very long story short, ended up with graphic details being made public through the report by independent counsel Kenneth Starr. And it is impossible to overstate just how globally famous Monica and private details of her life became. The media obsessed over every angle of her story, from tabloid stories like these to cartoons where microphones pointed at her face were replaced with penises to endless late-night comedy jokes. Look, my hands are not clean here either. I wasn’t in the U.S. At the time, but ten years after the fact, I was in a “Daily Show” piece marking the anniversary of the scandal, above a graphic reading “Ten sucking years.” Which is gross. It’s gross. And many comedians have since publicly expressed regret about things they’ve said, although one who hasn’t, and who was among the most relentless, was Jay Leno.

JAY LENO: Let’s see what’s going on with Monica, or as president Clinton calls her, “My little humidor.” One million samples of DNA. They said it was the largest collection of DNA in the world, not counting Monica Lewinsky’s closet. And the humidity, man, I’ll tell you, people’s clothes are stickier than Monica Lewinsky’s. Man, it was just, oh. And you can’t get away without at least one of these. Lewinsky, back on her feet. All right, ladies and gentlemen! And the grammy for best organ recital went to Monica Lewinsky, ladies and gentlemen.

OLIVER: Those jokes have not dated well in any sense of the word. And they’re pretty rough, especially coming from a guy who, just this week, complained about late-night TV, saying he’d like to see a bit of civility come back. You know. Like that time he did a bit with a fake book about Lewinsky titled “The slut in the hat.” And if that’s what he means by civility, may I offer my new book, “Oh, the places you can go f**k yourself, Jay Leno.” Look how civil I’m being! Look how civil this is.

Imagine being so shook by Leno’s comments you felt the need to compile a Media Matters-style compilation of his old jokes to whine about.

If that wasn’t cringe enough, Oliver went on to interview Monica Lewinsky for ten minutes straight and treated her as an expert on public shaming, social media and online bullying:

If this show is any indicator, the current state of late night is worse than anything Jay Leno could ever imagine.