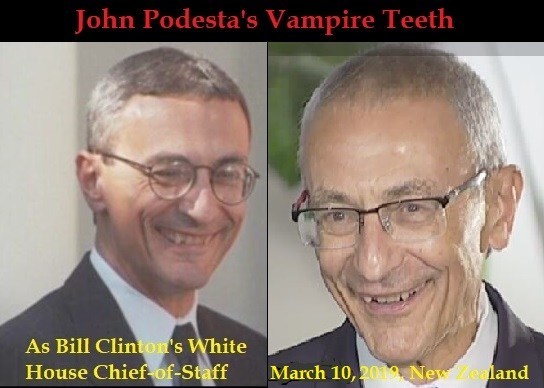 On March 14, 2019, New Zealand sustained its deadliest mass shootings in modern history when a gunman, 28-year-old Brenton Tarrant, killed 50 people and injured another 50 at Al Noor Mosque and the Linwood Islamic Centre in Christchurch, New Zealand.

The media immediately identified Tarrant as that most noxious of all monsters — “an alt-right affiliated white supremacist”. (Wikipedia)

Strangely, there is a John Podesta connection to the New Zealand mosque shooting.

John Podesta, 70, is a major Democrat Party honcho. He was:

Here are his connections to the Christchurch mosque shootings:

(1) John Podesta just happened to be in New Zealand 5 days before the mosque shootings.

To begin, New Zealand is enmeshed with the U.S. Deep State, being a member of the Five Eyes spy network — a powerful intelligence club made up of the US, UK, Canada, Australia and New Zealand.

As reported by MSN.news on March 10, 2019, Podesta was in New Zealand for a Global Progressives event. He was interviewed on TV by a pliant and fawning Newshub political correspondent, Tova O’Brien, who extolls Podesta as “one of the most powerful in U.S. Democratic politics” and “someone who understands too well the influence and damage hacking and fake news can do.”.

Promoting the Russian election-meddling meme that Democrats never tire of, Podesta said he agrees with New Zealand intelligence’s warning to Parliament last month that their election is also vulnerable to a serious cyber attack from Russia and China. Podesta said:

“Vladimir Putin must be sitting in the Kremlin saying this is the best return on investment I ever got – I’ve got a pliant president of the United States. I’d say very worried. I don’t see why they couldn’t do it. And there are other state actors as well. There are other actors in the region including China that may have a high degree of interest in being able to penetrate what the private conversations of people in NZ politics and NZ Government are looking at.”

Calling the country a “juicier target”, Podesta said New Zealand should guard against hacked information being weaponised as fake news: “What’s new is this weaponisation – the use of social media to spread discord, lies, dissatisfaction – that’s I think what you’ve got to look out for.”

To watch the interview, go here.

The (UK) Sun reports, March 15, 2019, that “Crazed Brenton Tarrant scrawled the names of modern terrorists, ancient military commanders and far-right symbols on his guns and magazines of ammunition before going on a rampage in New Zealand,” including the words “For Rotherham” — an apparent reference to the paedophile ring run by British-Pakistani men in the Yorkshire town in recent decades.

What The Sun missed are two other symbols painted in white on Tarrant’s semi-automatic gun: that of a fish and the number 14.

Below is a pic of the gun. I painted the red circles around the two symbols.

Where have we seen the fish symbol and number 14 before?

In December 2016, I did a post on just that: “Those cryptic markings on John Podesta’s palms“.