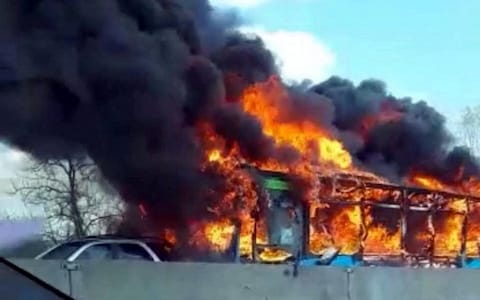 Fortunately, it appears no children were hurt, but he did threaten to kill all of them. Milan anti-terrorism prosecutor Alberto Nobili told German news agency DPA that the man’s motives were unclear, but prosecutors were not ruling out terrorism. The hijacker had a criminal history for, among other things, sexual harassment of a young girl. He received a  one-year suspended prison term in 2018 for sexually harassing 17-year-old girl and yet he was driving a school bus.

He kidnapped the children and torched the bus because he opposed Italy’s migrant policies.

All of the children were rescued when the bus crashed following a police chase, allowing officers to force open the back door and help students off the bus, as the driver threatened martyrdom. The man ordered a teacher to tie the children’s hands with plastic ties but the teacher only loosely attached the ties to four or five of them so that they could easily free themselves afterwards, local sources said according to Italian news agency ANSA.

We were all very scared,” said one boy who was interviewed anonymously by La Repubblica newspaper. “He tied us all up and seized all mobile phones so that we could not call the police.”

“No-one will survive,” bus driver Oussenyou Sy told the scared middle schoolchildren, after threatening them with a knife and collecting their mobile phones; he had poured gas inside the school bus in advance.

He also sent a video to friends in Italy and Senegal indicating plans with the message, “Africa, Rise up,” they said.

“One of the telephones, belonging to a classmate, fell to the ground, so I pulled off the handcuffs, hurting myself a bit, and went and picked it up. We called the Carabinieri and the police.”

Authorities said that an adult called an emergency operator, while one of the students called a parent, and they alerted authorities, who set up roadblocks. The bus was intercepted on the outskirts of Milan by three Carabinieri vehicles, which were able to force it into the guardrail, De Marchis said.

“While two officers kept the driver busy – he took a lighter and threatened to set fire to the vehicle with a gasoline canister on board – the others forced open the back door, breaking two windows,” De Marchis said. While the evacuation was still underway, the driver started the blaze.

De Marchis credited the officers’ “swiftness and courage,” for getting out all the children and their teachers “with no tragic consequences.”

A 47-YEAR-OLD MAN WAS ARRESTED IN MILAN AFTER HIGHJACKING A SCHOOL BUS WITH 51 CHILDREN ON BOARD AND SETTING IT ON FIRE.

The man hijacked the school bus with 51 children on board as he was driving them back to school from a sporting event. He reportedly shouted to the children that he wanted to kill himself in protest to Italian migration policy in the Mediterranean. The driver allegedly told the schoolchildren he was going to take them to Linate Airport as he shouted: “No one is going to get out of here alive”.

One of the children called his parents to alert the police.

Once the police were able to track the bus down on the motorway, in an attempt to sidetrack police cars he came to a stop and covered the bus with petrol to then set it on fire.

The 47-years-old man, originally from Senegal, was immediately arrested by the police at the scene.

Luca De Marchis, provincial commander of the Carabinieri in Milan said, explained that “the man was not armed” and “did not tie the kids”.
Promoted Story

He is now under investigation for attempted massacre and kidnapping.)

The school bus after the fire (Image: EPA)

None of the children was seriously harmed but 12 were taken to hospital for minor burns and inhalation of fumes.

The Police helped the schoolchildren escape by smashing the back window whilst the man was still torching the bus.

As explained by Major Giancarlo Carraro, commander of the Compagnia di Crema, the kids will be assisted by psychologists.

Twelve children and two adults were taken to the hospital.

Despite being taken to a hospital the Emergency Services claimed no one is seriously injured.

Firefighter and paramedics on the scene (Image: EPA)

Interior Minister Matteo Salvini reacted to the news: “A Senegalese with Italian citizenship driving a school bus, with precedents for drunk driving and sexual abuse, hijacked the vehicle and finally set it on fire.

“It happened in the province of Milan. The man was arrested. Now the law enforcement agencies are searching his home.

“I want to understand: why did a person with similar precedents was driving a bus to transport children?”