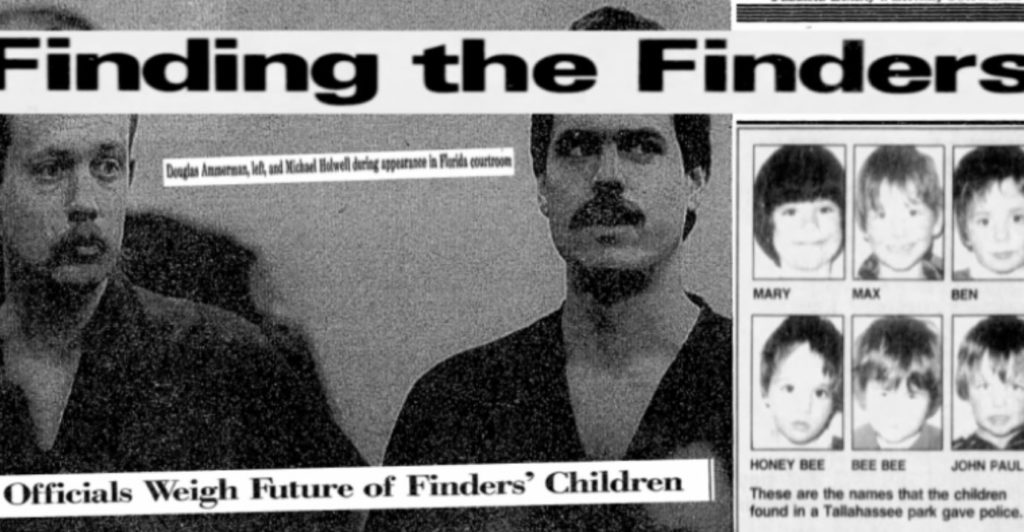 In February 1987, a mysterious cult known as The Finders made international headlines when they were suspected of everything from child trafficking, pedophilia, satanism, and connections to the Central Intelligence Agency. Now, more than 30 years after The Finders made its way to the front page of newspapers all over the United States, recently released documents from the Tallahassee Police Department threaten to shine a new light on the story of this international cult that once numbered in the hundreds.

The Finders cult was a young group of men, women, and children who claimed to be nothing more than former hippies living an alternative lifestyle and practicing alternative parenting. The Finders were founded by a mysterious man with military intelligence connections nicknamed “The Game Caller” who believed in turning his life, and the lives of those around him, into a constant game or experiment. The Finders members followed Marion Pettie’s every order without question.

The trouble for the group began on Wednesday, February 4, 1987 when an anonymous caller told the Tallahassee Police Department that two well-dressed men were at a local park with six kids and a blue van. The children were described as looking “disheveled” with potential signs of abuse. Tallahassee Police arrived and questioned Douglas E. Ammerman and Michael Houlihan, Finders members who said they were taking the kids to a school for brilliant children in Mexico. The men also said the children were being weaned from their mothers. Authorities eventually took the men and children into custody. A search of the van turned up 20 floppy computer disks, a TSR-80 computer, and a “device that police say could be used to hook into a computer in another location by telephone.”

Immediately it became clear that this case was not like any other. Following the arrests, the Associated Press reported that police had moved the six children from a shelter after receiving a “half-dozen” phone calls threatening the kids. The AP notes, “children were moved to an undisclosed location where they were being protected by armed guards.”

When interviewed by the police, the kids claimed the men are their teachers and that they have been living in a house with other children and adults. The children were unaware of modern technology, including phones, televisions, hot water, staplers, typewriters, and electricity. The oldest child, Mary, said they received instructions from “a man they called a Game Caller or a Game Leader,” the founder of The Finders, also known as Marion Pettie.

The Washington Post reported that a confidential police source previously told authorities The Finders were “a cult” that conducted “brainwashing” techniques at a warehouse and apartment in Washington D.C. The source told of being recruited by The Finders with promises of “financial reward and sexual gratification” and of being invited by one member to “explore” satanism.

At that point, officials with the U.S. Customs Service agency joined the investigation due to suspicion that the potential crimes may have crossed state or national borders. The U.S. Attorney’s Office and the Federal Bureau of Investigations were also said to have been investigating the case. After learning the children were based in the D.C. area, the Tallahassee department contacted D.C. Metropolitan Police to establish the identities of the children. Tallahassee police spokesman Scott Hunt told reporters that D.C. police were already aware of The Finders.

On Friday February 6, Virginia State police raided a 90-acre farm owned by Marion Pettie in rural Madison County, Virginia. Neighbors of the farm say children were often brought to the farm in vans, usually crying. An FBI report states that “evidence of a satanic/cult ritual was discovered.” The same report notes that all reports regarding Finders are to be classified as Secret.

Meanwhile, D.C. Metro Police and U.S. Customs Service agents raided other Finders properties, including a duplex apartment building and warehouse in Washington D.C. Police reports and articles from 1987 indicate that the D.C. police removed large plastic bags filled with color slides, photographs and photographic contact sheets from the warehouse. Some of the photos were of naked children.

U.S. Customs spokesman David Hoover told the Post, “We’re not saying that it’s pornographic, but it has all the earmarks.” A U.S. Customs Service report filed by Customs Agent Ramon Martinez described some of the photos as showing blood rituals involving children slaughtering goats while adults in white robes watched. It also described that they found instructions on how to purchase children.

By Monday, February 9, five days after the children and their two male chaperones were arrested, Metropolitan Police announced they have found no evidence of wrongdoing or satanic activity by The Finders. Health officials in Florida then say they have no evidence of sexual abuse of the children. D.C. Metro Police Chief Maurice Turner Jr. states that the department has not uncovered any evidence to “corroborate allegations made by an informant that the organization is a cult and that its activities involve satanic rituals.” By Thursday, February 12th, Gary Sheppard of the FBI’s Washington field office, says the FBI investigation has “not uncovered any evidence of federal violations.”

But according to the New York Times, “the statement from the Metropolitan Police Department conflicts with accounts from the police in Tallahassee, Fla., where the children were found, unwashed and hungry” and that “Officials there say that morning at least two of the children had signs of sexual abuse.”

This report from the New York Times was confirmed in 2018 when 75 pages of Tallahassee police reports were finally released to the public. The documents make it clear that when Mary, the eldest child, was questioned about sexual abuse she became very evasive. She said there were no “bad touches” between the children and adults, and reportedly became fidgety and wanted the interview to end. The same police report mentions that an official with the Department of Health and Rehabilitative Services, or HRS, said two children were confirmed cases of sexual abuse. Jane Pittilla of HRS stated that a Dr. Moorer had found one of the children lacked “anal sphincter control,” consistent with acts of sodomy. Also, one of the girls had signs consistent with vaginal penetration by fingers.

Despite these reports, by February 24 lead investigator Rick Huffman officially ended the Tallahassee Police Department’s investigation into The Finders. Huffman did not mention the reports of sexual abuse by doctors with HRS. The release of the TPD documents add more evidence to the theory that agencies within the federal government covered up the crimes of The Finders.

This alleged cover-up even made headlines in 1993 when U.S. News and World Report reported that the Department of Justice was initiating a new investigation into allegations that the CIA was somehow connected to The Finders cult and had worked to cover up the case. U.S. Customs Agent Ramon Martinez, as well as local police officers in Tallahassee, had spent the previous years attempting to alert the authorities to the apparent cover up.

After interviewing dozens of people directly involved in the case and reviewing hundreds of documents, the DOJ concluded there was no evidence of child abuse or trafficking, satanic cult activity, or law enforcement complicity. In the minds of the authorities, the case was closed. However, as we have uncovered here, there are many details that ought not be forgotten.

While it may be easy to dismiss these claims as nothing more than conspiracy, it’s difficult to ignore the statements from the Tallahassee Department of Health and Rehabilitative Services regarding signs of sexual abuse. There’s also the original reports from Customs Agent Ramon Martinez describing detailed information related to trafficking. Martinez conducted a limited search of the documents taken from The Finders warehouse and claims his search of the documents revealed the following:

When asked for a comment about his initial report, Ramon Martinez agreed to speak to us as long as we did not record. In one email exchange, Martinez makes it clear that he stands by his original report and does not believe anyone will be held responsible. On November 1, 2018, Martinez wrote:

Although the release of the TPD documents does fill in some of the gaps in story of The Finders cult, questions still remain. Did the Game Caller’s games involve trafficking of children? What exactly were The Finders finding? Why did this story make mainstream headlines and then disappear in less than a week? Was the story part of the “moral panic” of the 1980’s, or something more?

To learn more about this story please watch the following two part documentary:

Derrick Broze is the founder of TCRN.