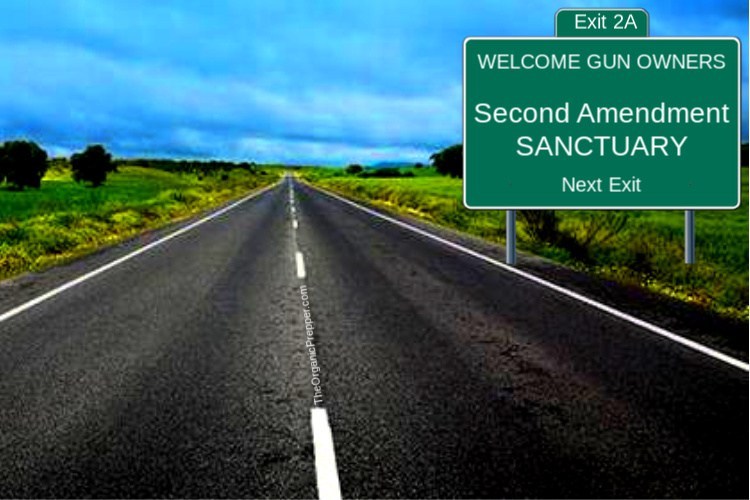 A growing number of states, counties, cities, and towns are declaring themselves “Second Amendment Sanctuaries” and are refusing to enforce gun-control laws that infringe on the Constitutional right to keep and bear arms.

While adopting ordinances and resolutions to defy gun laws isn’t a new tactic, momentum is rapidly building – likely in response to increasing calls for more gun control at state and federal levels.

Sheriffs in several states say they will NOT enforce gun control laws.

Sanctuary counties and towns are passing resolutions that state no funding will be used to enforce unconstitutional laws and that the sheriff will uphold his oath to the Constitution instead of enforcing laws that violate the Second Amendment.

County sheriffs are, legally speaking, the last line of defense in the battle for gun rights:

Federal agencies do not have state powers. Due to the Constitution’s structure of dual sovereignty, the feds have no authority to enforce state laws. Furthermore, states cannot be compelled to enforce federal laws. (source)

Here’s a rundown of the states with jurisdictions that have adopted Second Amendment Sanctuary resolutions.

In Colorado, 23 out of 64 counties have adopted Second Amendment Sanctuary resolutions, and others are considering implementing similar resolutions. Legislators and sheriffs in the state are pushing back against House Bill 19-1177, a red flag bill that will likely become law soon. For a full analysis and critique of this bill, give this a read: Kopel and Greenlee: Plenty of red flags in Colorado’s ‘extreme risk’ protection order bill.

Officially called Extreme Risk Protection Orders (ERPO), “red flag” laws permit police, healthcare providers, or family members to petition a state court to order the temporary removal of firearms from a person who may present a danger to others or themselves.

Weld County recently joined the growing list of counties in Colorado that have passed Second Amendment Sanctuary resolutions in response to the impending red flag law.

Commissioner Barbara Kirkmeyer, one of HB 19-1177’s harshest critics, said “The severity of this bill cannot be overstated. The name of this bill is the Extreme Risk Protection Orders. I think that’s a façade, and I think it’s fraudulent. I think actually, this bill should have been titled: ‘The Extreme Order to Confiscate Your Firearms, Eliminate Due Process, and Violate your Constitutional Rights Bill.”

“The bill is so riddled with constitutional problems that it makes it hard to understand how professional lawmakers could have constructed something so terrible,” Reams said, adding the bill, “raises some serious concerns about due process, in that a person can have their guns taken away and their rights violated, all without ever having a chance to appear in an initial court hearing and cross examine accusers and witnesses in person. In legal terms, this is an exparte hearing.” (source)

Reams added that one of the biggest problems with the law is it does not address actual mental health issues – it only allows for guns to be taken away, leaving the person in the same position and without medical help.

To date, 63 out of 102 counties or municipalities in Illinois have adopted Second Amendment Sanctuary resolutions, and more are expected.

To date, 3 out of 23 counties have adopted Second Amendment Sanctuary resolutions.

Sheriffs in Nye County and Eureka County have said they oppose new gun laws in the state and will not enforce them.

“In Germany prior to WWII, we saw Hitler place restrictions on the public’s right to bear arms,” Wehrly said in his letter. “I agree with Sheriff Watts. I will not participate in the enforcement of this new law and certainly won’t stand silent.”

Watts wrote in his letter that he would not stand by while “citizens are turned into criminals due to the unconstitutional actions of misguided politicians.” (source)

Elko County may soon join Nye and Eureka – commissioners there plan to vote on a resolution to become a Second Amendment sanctuary county at a meeting on March 20.

When New Mexico’s new Democratic governor, Michelle Lujan Grisham, was sworn into office on January 1, Democrats in the state rushed to expand gun control. Those bills were met with opposition from most of New Mexico’s sheriffs:

Of the 33 sheriffs in the state, 29 have voiced disapproval of the package of anti-gun legislation by issuing a declaration through the state sheriffs’ association, stating that the “rush to react to the violence by proposing controls on guns is ill-conceived and is truly a distraction to the real problems proliferating violence in our counties and our state.” (source)

After the NY SAFE Act was passed in 2013, some New York counties passed resolutions in opposition. There are currently 52 out of 62 counties with such resolutions, and the New York State Sheriffs Association sued to block the law.

Just days ago, a county in North Carolina joined the resistance:

Among the provisions is a warning that Cherokee County “will not authorize or appropriate government funds, resources, employees, agencies, contractors, buildings, detention centers or offices for the purpose of enforcing…laws, orders, mandates, rules or regulations that infringe on the right by the people to keep and bear arms.” (source)

Of the 36 counties in the state, 13 have adopted Second Amendment Sanctuary resolutions, and there are surely more to come, according to a recent report by Reuters:

Organizers in Oregon plan to put even more defiant “sanctuary ordinance” measures on county ballots in 2020 that will direct their officials to resist state gun laws.

In late January, the state of Washington made the news when several sheriffs in the state publicly vowed not to enforce the new unconstitutional gun laws that were passed in November. As of February 2019, the sheriffs of more than a dozen of the state’s 39 counties have publicly stated they will not enforce the law, though some said they will only refuse to do so until the final adjudication of pending lawsuits against the legislation.

There are even 3 sanctuary STATES.

Three states have passed bills to protect 2A rights at the state level.

In 2013, Alaska passed HB 69, which declares certain gun control measures to be unconstitutional, and made it unlawful for any state assets to go toward the enforcement of federal gun laws:

It declares that guns and ammunition possessed by Alaskans are exempt from federal gun laws. It also subjects federal agents to felony charges if they try to enforce any future federal ban on semi-automatic weapons or ammunition or enforce any new federal requirement for gun registration.

Republicans said they are willing to let the courts sort out the issues. They said that they must stand up for Second Amendment gun rights and won’t bow down to the federal government on this. A number said they heard from constituents who back the bill.

Some Democrats argued that the measure puts Alaskans at risk of criminal prosecution if they ignore federal gun laws. While the bill allows the state to defend Alaskans charged with violating a federal gun law, there’s no guarantee of that help or any sign the federal government will back off. (source)

Erich Pratt, Director of Communications for Gun Owners of America, cheered the governor’s action. “By signing this nullification bill into law, Idaho has joined an elite class of states that are telling the feds to ‘get lost’ — especially when it comes to unconstitutional gun control infringements.”

James Madison, the “Father of the Constitution,” also advised this very tactic.  Madison supplied the blueprint for resisting federal power in Federalist 46. He outlined several steps that states can take to effective stop “an unwarrantable measure,” or “even a warrantable measure” of the federal government. Madison called for “refusal to cooperate with officers of the Union” as a way to successfully thwart federal acts. (source)

The new law nullifies a wide range of federal attacks on the right to keep and bear arms in the State of Kansas.  It states, in part:

In conjunction with Section 6a (quoted above), the bill defines what is meant by “the second amendment to the constitution of the United States,” and that it isn’t based off a decision of the supreme court.

What do you think about Second Amendment Sanctuary resolutions?

Do you believe they will protect the rights of gun owners? Or, do you think the government will ultimately find ways to confiscate guns anyway? Share your thoughts in the comments below.