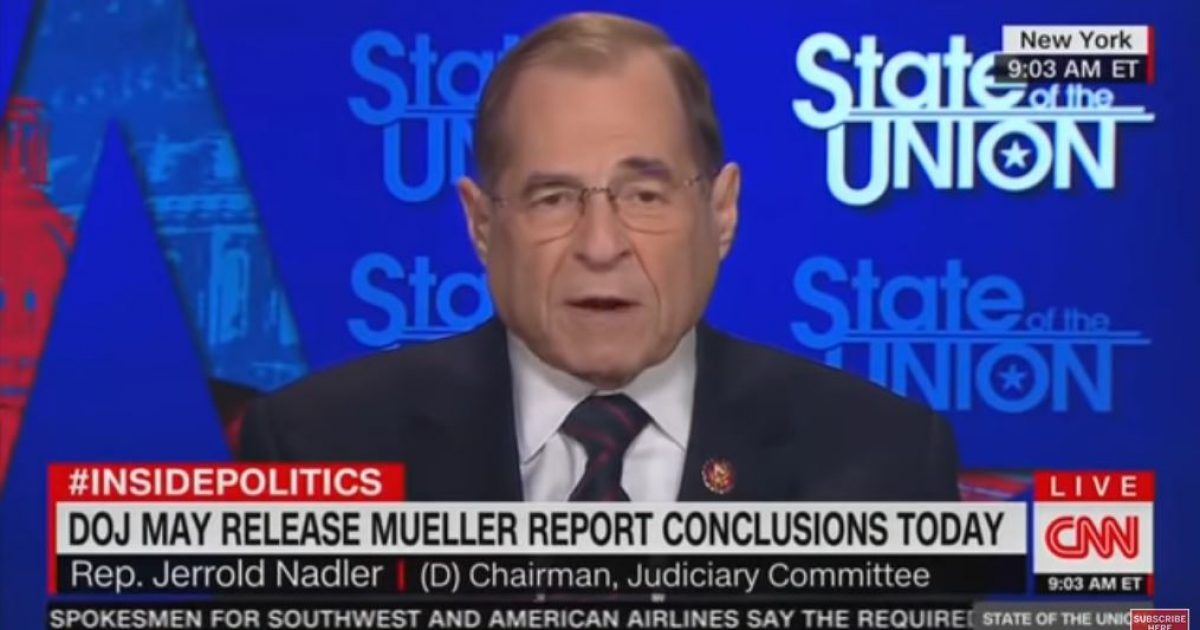 While appearing on Sunday’s edition of CNN’s “State of the Union” with guest host Dana Bash, Jerrold Nadler, Google’s bought-and-paid-for congressman from New York, dismissed the finding of no collusion in AG Barr’s summary of the Mueller report and told Bash he not only knows there was collusion in the 2016 election, but that he intends to keep the anti-Trump witch-hunt alive.

“We know there was collusion,” he said, according to a report at the Daily Caller.  “Why there’s been no indictments, we don’t know.”

Perhaps that’s because there’s no reason to hand indictments down.  But we digress.

The Daily Caller informs us:

Nadler listed the Trump Tower meeting — which has been the subject of numerous false reports — and the way Trump “pressured the FBI to go easy, to stop investigating Flynn,” and Trump firing Comey as evidence of the alleged “collusion.”

Bash pointed out several times that none of that rose to the level of indictment from the Mueller team, but Nadler quickly shrugged it off.

“Well, there have been obstructions of justice, whether they are — clearly, whether they are criminal obstruction is another question,” Nadler said. “But we have — the special prosecutor is limited in scope. His job was limited in scope and limited to crimes. What Congress has to do is look at a broader picture. We are in charge — we have the responsibility of protecting the rule of law, of looking at obstructions of justice, abuses of power, at corruption, in order to protect the rule of law so that our democratic institutions are not greatly damaged by this president.”

After Barr released his summary showing no collusion, Nadler’s office issued a statement that he would hold a press conference and wants Barr to appear before the House Judiciary Committee.

In light of the very concerning discrepancies and final decision making at the Justice Department following the Special Counsel report, where Mueller did not exonerate the President, we will be calling Attorney General Barr in to testify before @HouseJudiciary in the near future.

Barr says that the President may have acted to obstruct justice, but that for an obstruction conviction, “the government would need to proved beyond a reasonable doubt that a person, acting with corrupt intent, engaged in obstructive conduct”.

But that’s not what Barr said.

Here’s what he actually wrote:

Obstruction of Justice. The report’s second part addresses a number of actions by the President — most of which have been the subject of public reporting — that the Special Counsel investigated as potentially raising obstruction-of-justice concerns. After making a “thorough factual investigation” into these matters, the Special Counsel considered whether to evaluate the conduct under Department standards governing prosecution and declination decisions but ultimately determined not to make a traditional prosecutorial judgment. The Special Counsel therefore did not draw a conclusion — one way or the other — as to whether the examined conduct constituted obstruction. Instead, for each of the relevant actions investigated, the report sets out evidence on both sides of the question and leaves unresolved what the Special Counsel views as “difficult issues” of law and fact concerning whether the President’s actions and intent could be viewed as obstruction. The Special Counsel states that “while this report does not conclude that the President committed a crime, it also does not exonerate him.”

In making this determination, we noted that the Special Counsel recognized that “the evidence does not establish that the President was involved in an underlying crime related to Russian election interference,” and that, while not determinative, the absence of such evidence bears upon the President’s intent with respect to obstruction. Generally speaking, to obtain and sustain an obstruction conviction, the government would need to prove beyond a reasonable doubt that a person, acting with corrupt intent, engaged in obstructive conduct with a sufficient nexus to a pending or contemplated proceeding. In cataloguing the President’s actions, many of which took place in public view, the report identifies no actions that, in our judgment, constitute obstructive conduct, had a nexus to a pending or contemplated proceeding, and were done with corrupt intent, each of which, under the Department’s principles of federal prosecution guiding charging decisions, would need to be proven beyond a reasonable doubt to establish an obstruction-of-justice offense.