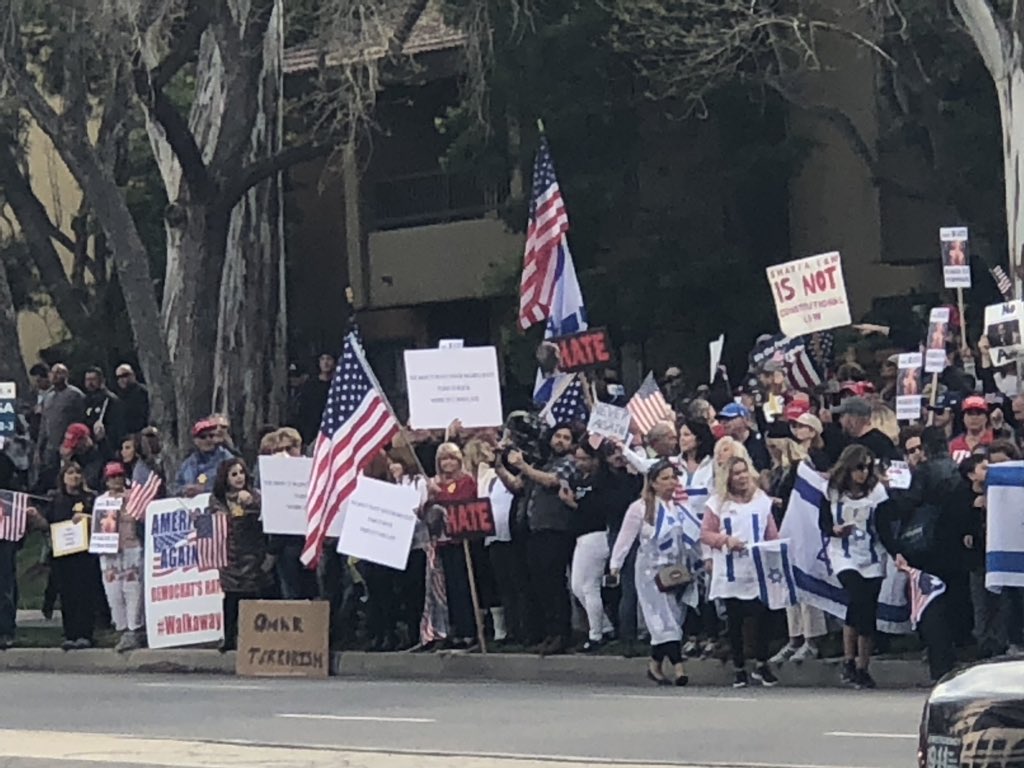 The massive protests which just occurred at the Woodland Hills Hilton against the antisemitic poison spewed by Ilhan Omar is only going to grow. Nobel Peace Prize winner Dr Martin Luther King Jr understood the antisemitic evil Omar represents when he said with great wisdom and prescience in December 1967: “When people criticize Zionists, they mean Jews. You’re talking Antisemitism”. Omar’s antisemitic rhetoric foreshadows another Kristallnacht, and the decent people are rising up against it. (Letter written to local newspaper by R. Sherman).

The flagrant Jew-hatred of Ilhan Omar, Rashida Tlaib, Linda Sharia Sarsour and the new Democrat party forces people to see the thing. What was bubbling beneath the surface has been forced into the sunlight and people are made to choose between good and evil. You get to see people for who they really are and what they stand for.

And shame on the Hilton who has a notorious history  of hosting the most dangerous and nefarious groups and individuals.

Ilhan Omar shared the stage with Hassan Shibly. Shibly has a track record of defending terrorist groups and acting as an apologist for militant Islam. Following the 2006 Israel-Lebanon War, Shibly granted legitimacy to Hizballah by characterizing it as a “resistance movement” that provides valued social services to the Lebanese people. “They’re absolutely not a terrorist organization,” Shibly said, and “any war against them is illegitimate” — more on that here.

The speech started off in a pretty standard fashion, with the Congresswoman acknowledging that it has been a very hard week for Muslims given the tragedy in New Zealand and saying how thankful she is to be in California with the people in attendance who are “fighting for justice, for equality, for the right for us to equally exist in this country.”

The speech didn’t stay uncontroversial for long, however, as she shifted to a more aggressive position.

Acknowledging the protesters outside, many of whom were expressing concern about her antisemitism, Rep. Omar said “I know many of them drove miles to get here, spent a lot of energy, and resources, and money to purchase the signs that they have. But I don’t think any of them realize that people like myself and many of the people in this room could care less about what they have to say — because we know who we are and where we belong.”

Rep. Omar turned back to New Zealand, saying that “many of us know this isn’t a one-off incident” and that many Muslims were “holding their breath” and waiting for something like this to happen.

She then blamed Trump for the massacre carried out by an Australian man in New Zealand.

“We all kind of knew that this was happening, but the reason I think that many of us knew that this was going to get worse is that we finally have a leader, a world leader in the White House, who publicly says Islam hates us. Who fuels hate against Muslims. Who thinks it is okay to speak about a faith and a whole community in a way that is dehumanizing, vilifying — and doesn’t understand, or at least makes us want to think that he doesn’t understand, the consequences that his words might have. Some people, like me, know that he understands the consequences. He knows that there are people that he can influence to threaten our lives, to diminish our presence, but what we know and what Islam teaches us — and what I always say, is that ‘Love Trumps Hate.’”

Addressing the ban immigration from terror hot spots, Rep. Omar repeatedly referred to it as a “Muslim ban,” despite the fact that it is not a ban on every, or even most, Muslim nations.

Speaking about the outrage over her remarks about Israel, Rep. Omar said that their faith’s “initial foundations were built by a prophet who was vilified” and had “stones thrown at him,” so “you know that when Ilhan is facing some… controversy… that is not something to be afraid of.”

Rep. Omar went on to angrily explain how Muslims are expected to be “good,” “get an education,” “raise their children,” and “not bother anyone.” She lamented that they are expected to not “make anyone uncomfortable” — but that even when they are “the best neighbor” people work on “finding a way to not allow for every single civil liberty to be extended to us.”

She then channeled her inner-Jeb Bush and whispered to the crowd that they can clap, which they obliged.

“It doesn’t matter how good you were if you can’t have your prayer mat and take your 15 minute break to go pray in a country that was founded on religious liberty,” Omar said to applause. “It doesn’t matter how good you are if you one day find yourself in a school where other religions are talked about, but when Islam is mentioned, we are only talking about terrorists and if you say something you are sent to the principal’s office.”

“So, to me, I say raise hell. Make people uncomfortable,” Rep. Omar said to the excited audience. “Because here’s the truth, for far too long we have lived with the discomfort of being a second-class citizen and frankly I am tired of it, and every single Muslim in this country should be tired of it.”

Rep. Omar urged the crowd to confront people if someone looks at them strangely. She explained that people are less hateful once they meet someone.

Approximately 17 and a half minutes into the speech, Rep. Omar addressed why she is so focused on Israel — though she did not say the nation’s name. She said that when she is having a conversation and someone asks her why she keeps talking about “this particular country” and not other countries, she said her “choice of a country to talk about is not my preference of country. It is based on what country is violating basic human rights.”

The speech received a standing ovation from the crowd.

Omar shared the stage at the event with Hassan Shibly, the executive director of CAIR Florida, who believes that Hezbollah and Hamas are not terrorist organizations and despises gay people.

The director of CAIR-Los Angeles, Hussam Ayloush, previously suggested that the US is “partly responsible” for the San Bernardino terrorist attacks. This seems to be a sentiment Rep. Omar could relate to, as she previously made excuses for a 2013 terrorist attack, claiming the incident which left 71 people dead and over 200 wounded was “a reaction” to “our involvement in other people’s affairs.”

MORE THAN 400 PEOPLE PROTESTED AGAINST REP. ILHAN OMAR IN WOODLAND HILLS AS THE FRESHMAN MINNESOTA CONGRESSWOMAN HEADLINED A COUNCIL ON AMERICAN-ISLAMIC RELATIONS (CAIR) MARCH 23 FUNDRAISER AT THE HILTON WOODLAND HILLS.

On Saturday afternoon, the Los Angeles Police Department closed down several blocks of Canoga Avenue for the protest, where protestors wore red Make American Great Again baseball caps and yellow Stars of David with the word “Jude” on them, carried American flags and Israeli flags, waved signs that called Omar an anti-Semite and chanted slogans that called for her to leave Congress.

Demonstrators carried signs that read “Remove Hate from our House;” “Your Hate Makes us Stronger,” “This is How it Started in Germany;” “No Sharia Law in America;” “Reject Ilhan’s Bigotry” and “Ilhan Omar is [sic] Pile of Human Waste.”

A giant banner stretching across the sidewalk read, “Islam Doesn’t CAIR for Free Speech,” with headshots of Fox News host Jeanine Pirro, who was suspended for saying that Omar follows sharia law, and activist Laura Loomer, who has been “silenced on many platforms,” the banner said.

Members of San Fernando Valley Israeli community turned out, including David Zerbib, a bodyguard who was at the L.A. Fitness next door to the protest, heard the noise and decided to join.

“I heard about Ilhan Omar being in town…it’s an honor to be here among everyone else,” he said.

While some have said that Omar’s wearing of a hijab indicates that she wants sharia law in the United States, Zerbib said the problem was not with her head covering but with her rhetoric.

While there did not appear to be any arrests or instances of violence, the protest at times became ugly. As apparently-Muslim people in formal clothing walked into the hotel across the street, protestors shouted hateful remarks including “traitors” and “bastards.”

Leonard Furman, a retired Russian Jew from Porter Ranch, made his anger known in less confrontational ways. Furman was among the many protestors who wore a yellow Star of David on his shirt.

“I thought it would be very appropriate to have one and show who I am,” he said.

The rally against Omar was a grassroots effort that was publicized largely through social media, drawing not only Jews and Israelis but Christians, as well.

“As a Christian it is the belief that it is my duty to stand behind Israel,” said Kira Innis, who wore a Make America Great Again hat. “[Israeli Prime Minister] Bibi Netanyahu is our ally and our friend. While the liberals have spent eight years under the last guy shivving him in the back, President Trump now has his back and Ilhan Omar would seek to undue the very key work that has been done by our president to help aid the Jewish people.”

“Down with the likes of Ilhan and up with the likes of Judge Jeanine,” Innis added, referencing the Fox News host whose show has not aired since she said this about Omar on March 9 in her opening: “Is her [Omar’s] adherence to this Islamic doctrine indicative of her adherence to Sharia law, which in itself is antithetical to the United States Constitution?”.

Furman said he was pleased to see that Omar concerns not only Jewish people but people of many backgrounds.

“I am glad people of different denominations, not only Jews came to express outrage,” he said.

This past February, Omar tweeted that American support for Israel is “all about the Benjamins baby.” Many said her comment reinforced that Jews control the world with money. She also denounced AIPAC as having too much influence on the U.S. government. And she said that her unwillingness to express loyalty to Israel was why many were upset with her, evoking the stereotype that Jews have dual loyalties.

CAIR, a Washington D.C.-based nonprofit with chapters around the country, is one of the top 10 most anti-Israel groups of America, according to the Anti-Defamation League, which said CAIR has a “long record of anti-Israel rhetoric, which has, at times, crossed the line into anti-Semitism.”