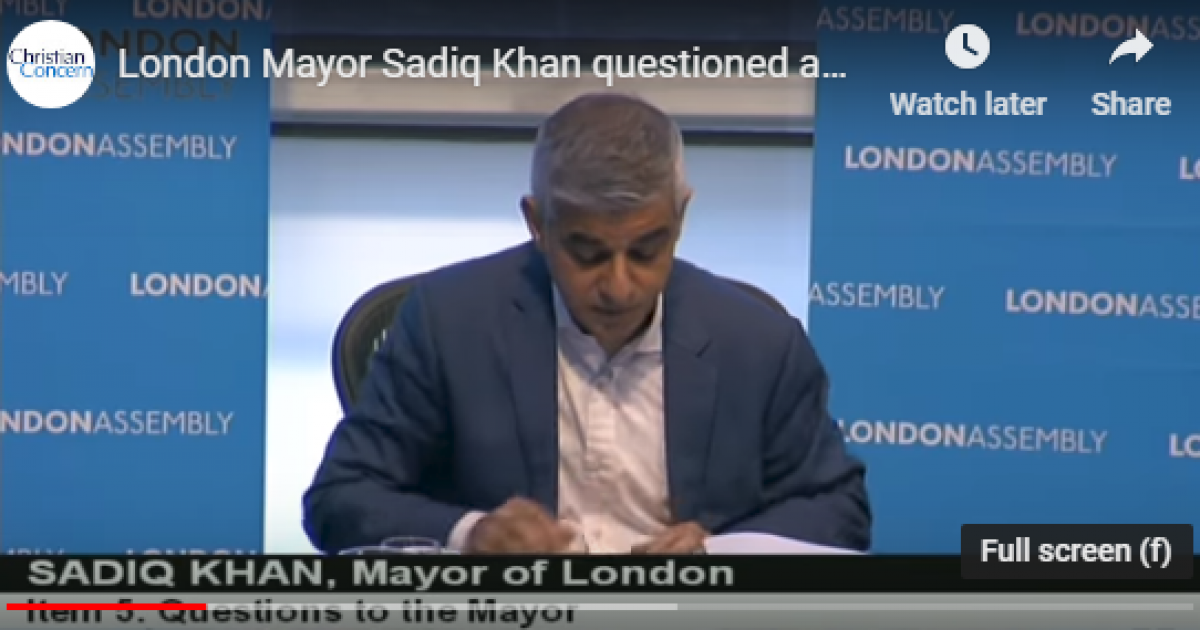 How much has Britain deteriorated as a free society? This much: a Christian preacher from Nigeria, Oluwole Ilesanmi, recently discovered that preaching Christianity in public is illegal in London, because it offends Muslims. And London’s Muslim mayor has defended the arrest of Ilesanmi, saying that “there are limitations” on the freedom of speech.

Ilesanmi was arrested on February 23 while he was preaching, after a Muslim complained to police. A London activist, Ambrosine Shitrit, filmed the arrest. She explained what happened in an interview with CBN News: “A man with a hoodie was trying to humiliate, to be aggressive towards this Christian street preacher. I could see that he was a Muslim man because he was talking about, ‘No. Allah is the right way.’”

The Muslim who was harassing Ilesanmi was not arrested. Ilesanmi was. A police officer asked him, “What are you doing here?”

“I am preaching,” Ilesanmi answered.

The police officer responded: “You’re preaching. I am going to require you to go away.”

To that, Ilesanmi said: “You can never.”

“Okay,” said the police officer, “then I will arrest you for breach of peace.” What Ilesanmi asked him how he was breaching the peace, the officer replied: “What you’re doing. You’re causing problems, you’re disturbing people’s day and you’re breaching their peace.”

Andrea Williams of the Christian Legal Centre, which is working with Ilesanmi on his case, explained: “This was completely an overreach of their authority. There was no basis upon which to arrest the pastor although they did know clearly because it’s caught on the camera. There was no proper investigation. They arrested him for Islamophobia which isn’t an offense and certainly there was no evidence of the fact that he was Islamophobic or racist.”

London’s Muslim mayor, Sadiq Khan, thought this arrest was just fine. According to Christian Today, Khan was asked about the arrest of Ilesanmi during Mayor’s Question Time at the London Assembly on March 21. Instead of saying that he thought the arrest was appalling and gratuitous, and defending the freedom of speech in general and Ilesanmi’s right to preach Christianity in particular, Khan said with studied blandness: “I expect the police to take this matter seriously.”

He added: “It’s always been clear that freedom of speech is critical and must be protected but also the police must be able to investigate when allegations are made of a criminal offence.”

The possible “criminal offense” in Ilesanmi’s case is “Islamophobia” or offending a Muslim, which are criminal offenses according to Sharia, but not illegal in Britain – at least not officially.

This is in a London that has become so unsafe that Somali Muslim migrants are actually sending their children back to war-torn Mogadishu in order to keep them out of harm’s way. Crime rates are skyrocketing in Khan’s London, and Khan’s police are devoting time and attention not to stopping knife crime and making the city safe again, but making sure that Muslims don’t have to suffer hearing the sound of Christian preaching.

And when Khan was asked whether Christians could preach in London without risking arrest, he answered: “There’s not an unlimited right to freedom of expression or free speech. There are limitations and there’s a balance that needs to be done. But I’m quite clear in my own views – we should go as far as we can to uphold that really important principle [of free speech] and that includes discourse about religion.”

As long as that principle goes unchallenged, Britain will continue to race toward its own ruin.