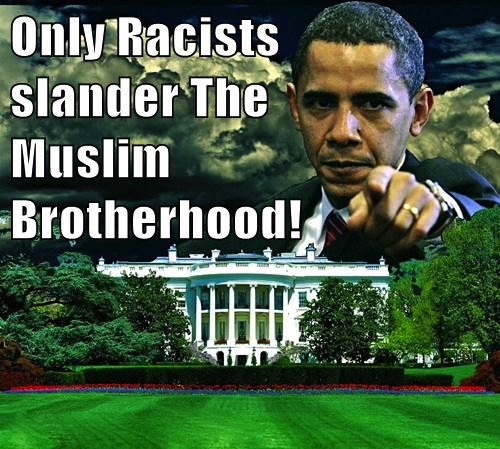 From the archives. Originally published September 3, 2013.

Well it seems like the secret that the Egyptians have been promising has been revealed. The question is… Will America listen?

We have been expecting this information, we just did not know the exact nature of it.

The Muslim Brotherhood terror TV network, Al Jazeera is reporting that Egyptian media is outing Barack Hussein Obama. I don’t know if he is a card carrying member but he is clearly a huge supporter of these vicious jihadists.

Director of Research at the Brookings Doha Center, Shadi Hamid, tweets out about the Egyptian media depicting Obama as a member of the Muslim Brotherhood.

On August 14th we reported that Saad Al-Shater claimed to have information that could put Obama in prison.

In an interview with the News Agency Anatolia in Turkey, Saad Al-Shater, the son of imprisoned Muslim Brotherhood leader Khairat Al-Shater, said his father “had in his hand” evidence that will put Obama in prison.

In a thinly veiled threat, Saad Al-Shater said a U.S. delegation was sent to Cairo by Obama to press for the release of the imprisoned Muslim Brotherhood leaders, including his father to prevent the release of explosive information.

Then on August 20th we revealed that a second source had come forward:

Anyone who reads The D.C. Clothesline will not be overly surprised by the revelation that Barack Obama is a member of The Muslim Brotherhood. We have all suspected it for a long time.

However, it feels good when someone finally acknowledges it. I don’t know what to do with this information to be honest. A few conservative blogs have already shared it and some of the right wing sites will probably pick it up. But this story is huge.

How can we wake people up?

We do have to remain vigilant in the search for the truth. This is just one source and we can’t independently verify the claims. With that said… No matter what Americans think of Al Jazeera, it is respected around the world. Evidently they think that this Egyptian newspaper story could prove to be credible.

We, potentially, just had the biggest bombshell of Obama’s presidency dropped in our laps and the American mainstream media will do nothing with it.

YOU are the media. If you want this information out then you must spread it my friends. Don’t expect to see this on the major networks.