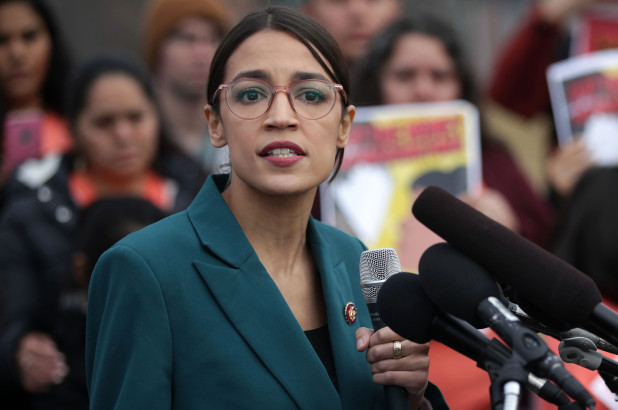 On Tuesday, the so-called “Green New Deal,” a scheme to destroy the U.S. economy for entire generations of Americans, went down in flames in a Senate vote, with the Democrats who once touted it voting “present.”

No senator voted to begin debate on the legislation, while 57 lawmakers voted against breaking the filibuster. Democratic Sens. Doug Jones of Alabama, Joe Manchin of West Virginia and Kyrsten Sinema of Arizona joined 53 Republicans in voting “no.” Sen. Angus King, I-Maine, who caucuses with the Democrats, also voted “no.”

The vote had been teed up by Senate Majority Leader Mitch McConnell, R-Ky., in a bid to make Democratic senators — including several 2020 presidential candidates — go on the record about the measure. McConnell had called the proposal “a radical, top-down, socialist makeover of the entire U.S. economy.”

The Green New Deal calls for the U.S. to shift away from fossil fuels such as oil and coal and replace them with renewable sources such as wind and solar power. It calls for virtual elimination by 2030 of greenhouse gas emissions responsible for global warming. Republicans have railed against the proposal, saying it would devastate the economy and trigger massive tax increases.

The solution to climate change is not this unserious resolution, but the serious business of human flourishing – the solution to so many of our problems, at all times and in all places: fall in love, get married, and have some kids.https://t.co/N2gYdJFldt pic.twitter.com/ekoFlaECSd

This despite the fact that a number of Democrat 2020 White House hopefuls fully signed on to the measure even though it would cost more money than exists on the entire planet.

Kamala Harris, for example, called the vote a “political stunt.”

.@SenKamalaHarris on the Green New Deal: “Political stunts won’t get us anywhere. Combatting this crisis first requires the Republican majority to stop denying science and finally admit that climate change is real and humans are the dominant cause." pic.twitter.com/OG81B2p2kb

Today's #GreenNewDeal vote is a partisan stunt to side-step needed debate on climate action, and give Republicans cover to put oil lobby checks over our kids. I've come to expect nothing less from @senatemajldr.

“[McConnell’s] stunt is backfiring and it’s becoming clearer and clearer to the American people that the Republican Party is way behind the times on clean energy and that Democrats are the party willing to take action,” said Senate Minority Leader Chuck Schumer, D-N.Y.

But isn’t it the Senate’s job to vote on measures like this?  Or is there something else going on?

Isn’t putting forth legislation that you have no intention of voting yes for a “political stunt”?

Because I encouraged them to vote present, along w/ others.

McConnell tried to rush the #GreenNewDeal straight to the floor without a hearing.

The real question we should be asking: Why does the Senate GOP refuse to hold any major hearings on climate change? https://t.co/de8oKOXeJf

So, Alexandria Ocasio-Cortez, the Democrat Socialist derided as a “pompous little twit” for her plan which will cause massive death across the planet, is now dictating Democrats’ actions.