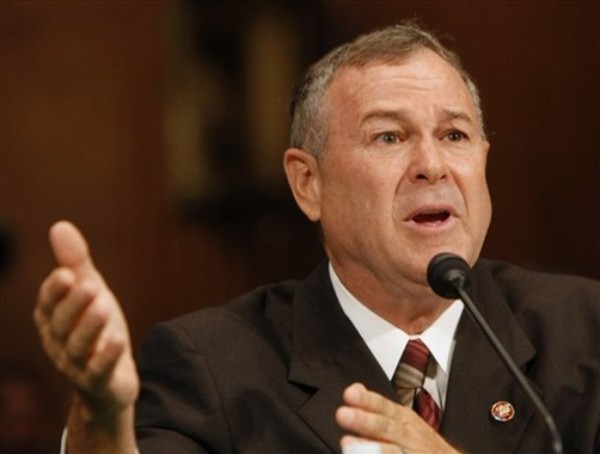 Attorney Orly Taitz has been advancing the issue of Barack Obama’s fraudulent documents, including his birth certificate, selective service form and his use of a bogus Social Security number for several years now. She has also thrown her hat into the ring in the primaries for California Attorney General. On Monday, Taitz said that she had three United States Congressmen, including her own Representative, along with voters who specifically asked questions about Obama’s bogus IDs. In that meeting, it was Taitz’s own Congressman, according to her, who asked the valid question, “Why doesn’t Obama have a valid Social Security number and valid IDs?”

According to Taitz’s website, Congressmen Dana Rohrabacher “invited Taitz to attend a meeting of activists and patriots, which was held at his home in Costa Mesa, CA.”

At the meeting, she also addressed Texas Congressman Ted Poe and asked him when Congress would address the issue of Obama’s fraudulent and fabricated IDs and stolen Social Security number. According to Taitz, Congressman Rohrabacher said that people who question Obama’s legitimacy are called names like “birther,” but went on to say, “nobody is answering a legitimate question: why doesn’t Obama have a valid Social Security number and valid IDs?”

It should be noted that the original birthers were not Republicans, nor were they members of the Tea Party. That’s right. The original birthers were Democrats, including Bill and Hillary Clinton. Barack Obama’s publishers were also birthers, long before the accusation of wearing tin foil hats and being racists against America’s first black (illegitimate) president were tossed about. The Kenyan Parliament and even a Kenyan newspaper were birthers before it was cool to be called “birther.” Even a document examiner tied to Obama’s defense attorneys says that Obama’s birth certificate is 100% fraud.

While Poe said that members of Congress know about the issue and talk about it, he would not give a definitive answer for anything that is being done. Apparently, they all have the same sentiment as spineless Oklahoma Congressman Markwayne Mullins and just “don’t give a sh*t.”

Rorhrabacher told Taitz following the meeting, “I do feel bad that people are called names, called birthers. I feel this is a legitimate issue, this question should have been raised and answered long time ago, at the very beginning.”

From Taitz’s perspective, she believes the GOP want to try and win the 2014 elections and with that in mind don’t want anything to distract from that. So far, the battle is uphill to take six seats in the Senate. Taitz wrote that she agrees that the issue might be best heard on its merits following the November elections.

I disagree with her on this point. I don’t think Congress wants to hear the merits of this issue. Establishment Republicans are scared to death of being called racist over this issue. After all, Sheriff Joe Arpaio took his evidence to the GOP convention in 2012 and where did that go? Nowhere.

Taitz went on to elaborate about what else took place at the meeting:

At the meeting a number of angry activists asked questions about impunity of officials like Eric Holder, who was found to be in contempt of Congress for refusal to provide essential documents in regards to high officials, including Obama’s knowledge of Fast and Furious and Lois Lerner, also in contempt of Congress for persecutions of Conservatives by the IRS. A question was asked: What can we, the citizens, do?

Ted Poe responded that aside from voting for true patriots and constitutionalists, the public can demand that judges rule. He stated that the law suit filed by the Congress against Eric Holder has been sitting in court for quite some time, a couple of years. Poe stated that when he was a judge, he did not take that long to rule on motions. At a prior meeting, Congressman Issa expressed the same frustration. All of the Congressmen talked about a judge, Obama appointee, who is simply sitting on the case filed by Congress seeking to enforce the contempt of court charge against Attorney General Eric Holder. The congressmen did not state the name of the Obama appointee judge, who is dragging her feet, but it is a matter of public record. Presiding judge is Amy Berman. The public can write to Judge Berman and urge her to expedite her ruling in this case. The case dealt with Fast and Furious, when Obama administration engaged in gun trafficking of thousands of assault weapons to drug cartels in Mexico. These drug cartels are closely connected to a number of Muslim terrorist organizations.

Further, Congressman Royce, Chair of the Foreign Relations committee, spoke about his complete frustration and disgust with Obama’s policies in regards to Iran. Royce stated that a number of the US administrations since the 1979 revolution in Iran followed the same policies. There were sanctions on Iran and the funds were frozen. Royce was outraged by the fact that Obama went behind the back of the US Congress and secretly negotiated with Iran seeking to lift sanctions and unfreeze funding. Royce stated that the new stance by the Obama administration would place a limit in the grade of Uranium, but not on the amount of Uranium produced at that grade. Of even greater concern, is the fact that the agreement completely omits any limitation on enrichment of Plutonium. Royce argued that there is no other reason for Iran to enrich Plutonium aside from building a Plutonium bomb and Iran already announced that it will increase the production of enriched plutonium 300 times.Further Congressman Rohrabacher spoke about the American Revolution. He stated that we all know about the Boston tea party, but not many know about the fact that King George prior to the revolution issued a decree where he announced that all the trees in the colonies belonged to the British crown and American colonists were obligated to pay a tax on every tree they cut. This caused a build up of an enormous anger, which subsequently ended in the American revolution. We are seeing this anger boiling and spilling out in Bunkerville NV, Utah and other places. Americans are angry and sooner or later this anger will lead to a change.

Taitz continues to pursue the avenues available to her in the courts, patiently filing and refiling to advance the case to open up the Obama social security fraud allegations to the Freedom of Information Act in order to determine with specificity that Obama is using Harry Bounel’s Social Security number.

It seems the representatives of the people are more interested in playing games with the devil and assuming power than they are actually dealing with a criminal administration that is leading us into a communist style revolution. One thing is for certain, if Congress were to press this issue they could shut down a lot of the illegal executive orders and unconstitutional laws of this administration simply by bringing to light the criminal usurpation of the office of the presidency by Barack Hussein Obama.