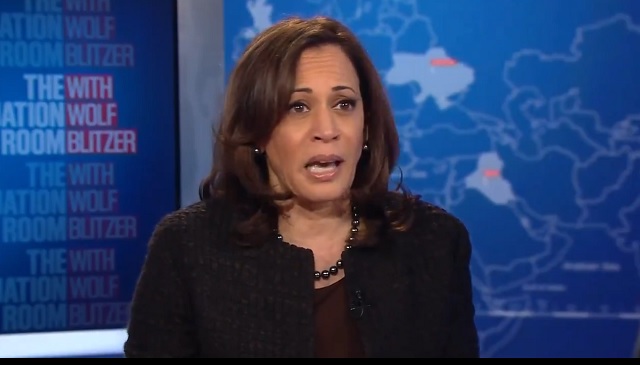 Democratic presidential candidate Senator Kamala Harris had no problem rushing to judgement and proclaiming the alleged attack on Jussie Smollett was a “modern day lynching” when she was working to push her anti-lynching hate crime bill through congress earlier this year.

.@JussieSmollett is one of the kindest, most gentle human beings I know. I’m praying for his quick recovery.

This was an attempted modern day lynching. No one should have to fear for their life because of their sexuality or color of their skin. We must confront this hate.

Tuesday on CNN, Harris said she’s “at a loss” and “completely confused” when it comes to judging Chicago prosecutors dropping all charges against Smollett for allegedly faking a hate crime against himself.

Democratic presidential candidate Sen. Kamala Harris (Calif.) said Tuesday evening that she is “completely confused” and “at a loss” after prosecutors dropped charges earlier in the day against “Empire” actor Jussie Smollett.

[…]During her interview on CNN, Harris added that she thinks “we’re going to have to leave it up to the judgment of the prosecutor.”

“I think we should leave it up to the judgment of the police chief and the mayor, of course, to give us some better sense of what’s going on. I don’t know,” she added.

I’m so excited that @KamalaHarris has decided to run for president. I would not be where I am today without her guidance during my first run for political office, and she has continued to mentor me as I work to reform the criminal justice system in Cook County.  —KF pic.twitter.com/O241FGKKMs

Though Foxx had to recuse herself from the case after being caught texting with an unknown family member of Smollett’s right after the investigation began, the case was not transferred to a different office. Instead, it was handed off to one of her underlings, Chicago assistant state’s attorney Joe Magats.

More from the asst state's attorney: "Here's the thing — we work to prioritize violent crime and the drivers of violent crime. Public safety is our number one priority. I don't see Jussie Smollett as a threat to public safety."

Foxx was also caught exchanging texts with Tina Tchen, the former chief of staff to first lady Michelle Obama, who reached out to her on behalf of an unspecified member of Smollett’s family to discuss “concerns about the investigation.” Incidentally, it was reported just last week that Tchen was hired by Southern Poverty Law Center president Richard Cohen (who has since resigned) to “audit” the SPLC’s workplace in the wake of founder Morris Dees’ sudden resignation for unspecified misconduct.

From the Montgomery Advertiser:

Tina Tchen previously worked as chief of staff to then-first lady Michelle Obama and now leads a “workplace cultural compliance” practice at Buckley LLP, which examines “gender and racial equity, sexual harassment” and other diversity barriers in the workplace.

[…] According to a biography on Buckley LLP’s website, Tchen previously served as chief of staff to first lady Michelle Obama and assistant to President Barack Obama. She was involved in multiple White House gender equity initiatives, as well as in the formation of the White House Task Force to Protect Students from Sexual Assault. She is also a co-founder of the TIME’S UP Legal Defense Fund, according to an SPLC release.

Tchen on Monday would not specifically speak to the issues her SPLC review might focus on, though she said it would look “holistically” at its workplace culture to “build diverse workplaces” for all groups of people.

“This is an incredible institution in our country, and I’m honored to be working with them to build a workplace that will live up to the values of SPLC, of justice and equality,” Tchen said.

[…] Tchen said Monday her charge is to look at the entire organization, not just its Montgomery headquarters, and to craft recommendations.

“Every workplace, including social justice organizations, must work hard to create a workplace culture that fully reflects their values and priorities, including when it comes to racial and gender diversity,” Tchen said in a release. “I am honored to have been asked to lead a comprehensive process to address all aspects of the workplace culture at SPLC, and look forward to working with staff, management and the board to build a workplace at SPLC that will truly reflect respect and safety for all, and the principles that SPLC has long stood for: truth, justice, equity and inclusion.”

Just how deep does this hate hoax go?