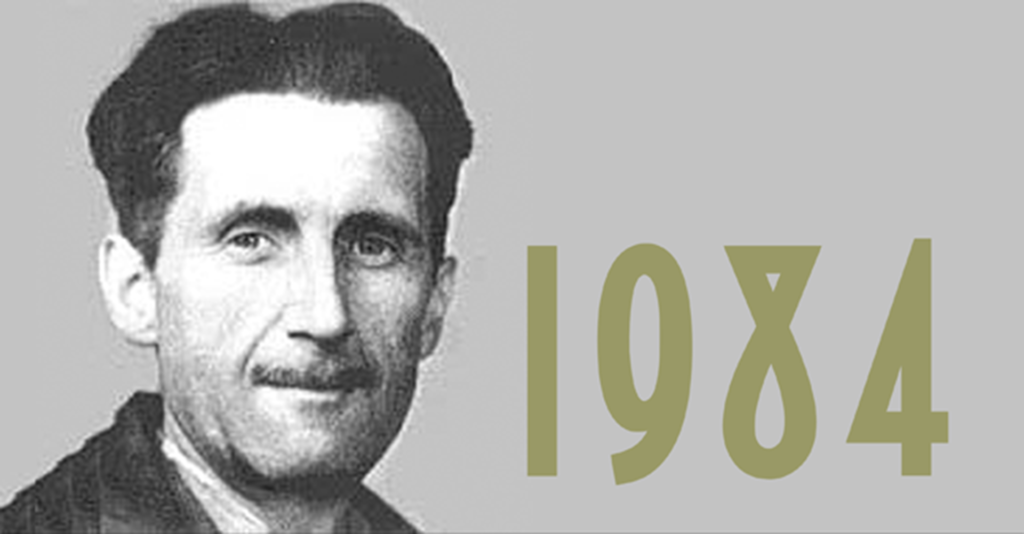 When I took 1984 with me on vacation recently, I didn’t expect to read it. Unlike the two other books with me—Jordan Peterson’s 12 Rules for Life and Matt Ridley’s The Rational Optimist—I had already read Orwell’s classic work. Or had I?

It had been at least 25 years. Most of what I remembered seemed to be fragments of quotes and cliches my brain had absorbed from internet articles and pop culture. Truth be told, I had always been more partial to Brave New World. Perhaps because Huxley’s dystopia had always seemed lighter and less malevolent. Less gritty.

I’m not sure which book I prefer now, but I will say reading 1984 today was a very different experience. To a teenage mind, 1984 is basically an allegorical prophecy of the modern police state. Big Brother is watching. Telescreens are everywhere. Children spy on their parents and report them to Thought Police.

I don’t mean to diminish these themes. Orwell, a one-time socialist who soured on its ideology once he got a good look at it, was prescient to observe how totalitarian surveillance states would operate. (Bear in mind, 1984 was published two years before the Stasi was formed.)

What impressed me reading 1984 today was Orwell’s grasp of the philosophy behind Big Brother, or, rather, its lack of philosophy (beyond Nihilism). Truth, we see, does not exist in Oceania, the totalitarian nation-state that serves as the setting of 1984.

The absence of truth is shown at various times in various ways, but it most famously is depicted when Winston Smith, the book’s protagonist, reflects that it’s only a matter of time before the Party would insist that two plus two makes five.

“It was inevitable that they should make the claim sooner or later: the logic of their position demanded it,” Smith tells us. “Not merely the validity of experience, but the very existence of external reality was tacitly denied by their philosophy. The heresy of heresies was common sense.”

It’s not just that Big Brother is hostile to truth, logic, or facts (though it is). It’s that truth, logic, and facts will at certain times inevitably conflict with its sole goal: control.

This brings us to a second observation about Oceania. It’s a land steeped in politics. It’s force-fed to people. They consume it, whether they wish to or not. It is pumped out of telescreens day and night. It comes from indoctrinated children and neighbors. Some of the people reciting the Party’s cliches believe it, others may not. But there is no escaping the Party’s dogmas.

At no point in the novel is this more thoroughly demonstrated than when Winston Smith reveals that even sex was polluted by politics. Here is how he described his initial act of love with Julia, the woman who becomes his lover:

In the old days, he thought, a man looked at a girl’s body and saw that it was desirable, and that was the end of the story. But you could not have pure love or pure lust nowadays. No emotion was pure, because everything was mixed up with fear and hatred. Their embrace had been a battle, the climax a victory.

It was a blow against the Party. It was a political act.

We see in 1984 a world in which politics has consumed life’s most intimate actions. I wouldn’t compare the United States to 1984. But I believe parallels exist.

Politics, few today would deny, saturates most aspects of our lives. It’s in our school systems and colleges. Football games, blockbuster films, and America’s churches. This was not always the case, and the development is not a healthy one.

And then there is the matter of truth. Last year the Rand Corporation published a report. It essentially said our civilization is suffering from a strange condition: Truth Decay.

Truth Decay is defined as a set of four related trends: increasing disagreement about facts and analytical interpretations of facts and data; a blurring of the line between opinion and fact; an increase in the relative volume, and resulting influence, of opinion and personal experience over fact; and declining trust in formerly respected sources of factual information.

Truth decay might help explain why many people—even intelligent sensible, grounded ones—seem to feel like Alice after she tumbled down the rabbit hole.

“We are living in an era when sanity is controversial and insanity is just another viewpoint,” the economist Thomas Sowell recently stated.

Few Americans today would deny, I think, that truth is under assault. It’s one of the few ideas on which Left and Right can agree. The disagreement arises over who are the greater transgressors of truth.

This is not a trivial matter. As FEE president Lawrence Reed recently observed, truth and freedom are inseparable.

“The first casualty on the slippery slope to tyranny is the truth,” wrote Reed. “If you wish to live in freedom, you must first commit yourself to truth in all things.”

Our future need not be as bleak as that of 1984. The first step to making sure it is not is to reclaim the cherished principle of free speech, and not strictly in a legal sense. Rather, we must remember that the free expression of ideas is essential to and inseparable from the search for truth.

The great American writer Walter Lippmann once explained why freedom of discussion is essential to not just freedom, but truth itself.

“…if we truly wish to understand why freedom is necessary in a civilized society, we must begin by realizing that, because freedom of discussion improves our own opinions, the liberties of other men are our own vital necessity,” wrote Lippman, one of the founding editors of The New Republic. “This is the creative principle of freedom of speech, not that it is a system for the tolerating of error, but that it is a system for finding the truth.”

If our age is suffering a truth crisis, perhaps it’s because we don’t esteem truth enough. Our society seems more interested in suppressing and hiding from ideas than wrestling with them, which is what an earnest pursuit of truth demands.

Thomas Jefferson once wrote that truth “has nothing to fear from” conflict. But the truth will not prevail in a world that prevents the conflict of ideas by suppressing speech.

“Freedom is the freedom to say that two plus two makes four,” Winston Smith tells us. “If this is granted, all else follows.”

When I read this line 25 years ago I didn’t understand what Orwell was saying. Now I do.

This article was sourced from FEE.org