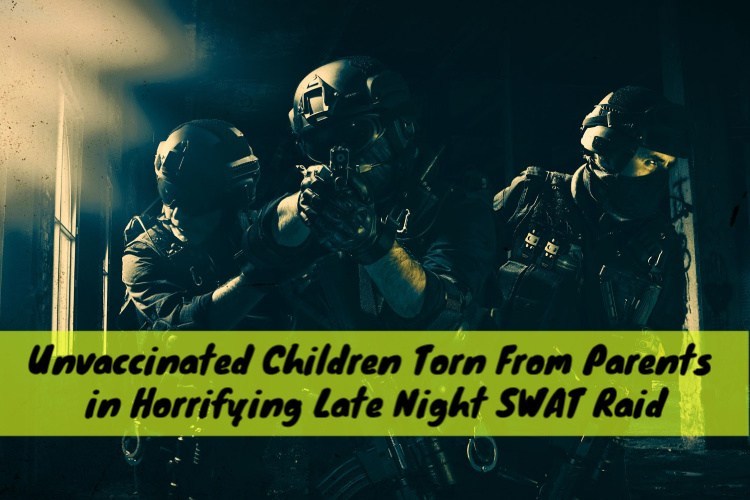 Warning: If you care about parental rights, this story will infuriate you.

On February 25, a pregnant mother took her 2-year-old son to the Southwest College of Naturopathic Medicine clinic in Tempe, Arizona because he had a fever of over 100. The doctor instructed the mother to take him to the emergency room because he is unvaccinated and she feared he could have meningitis.

The doctor called the emergency room at Banner Cardon Children’s Medical Center in Mesa to let them know the boy would be arriving.

But after leaving the doctor’s office, the boy showed signs of improvement. He was laughing and playing with his siblings, and his temperature moved closer to normal. Around 6:30 pm, the mother called the doctor to let her know the toddler no longer had a fever and she would not be taking him to the emergency room.

In Arizona, parents may decline vaccinations for their child based on personal, religious, or medical exemptions, but the mother was still concerned that the Arizona Department of Child Safety (DCS) would come after her. One can’t blame her for being afraid, as unvaccinated families have been targets of dystopian crackdowns and witch hunts of late.

The doctor assured her DCS would not come after her. According to police records, the mother then agreed to take her son to the hospital.

This is when things took a particularly nasty turn, reports AZCentral:

About three hours later, the hospital contacted the doctor to advise her that the child had not shown up and the mother wasn’t answering her phone, according to police records. The doctor contacted DCS.

A DCS caseworker called Chandler Police and “requested officers to check the welfare of a two year old infant,” according to police records. A caseworker said he was on his way to the house.

It was about 10:30 p.m. when two police officers knocked on the family’s door. The officers heard someone coughing.

Officer Tyler Cascio wrote in a police report that he knocked on the door several times but no one answered. (source)

The police then asked a neighbor to call the mother to let her know they wanted to speak to her. Meanwhile, the boy’s father contacted the police:

Police dispatch told the officers that a man at the home had called requesting that they call him. They called, and the man identified himself as the sick boy’s father.

The officer said they told the father they needed to enter the home for DCS to check on the child. The father refused, explaining that his son’s “fever broke and he was fine,” according to police records. (source)

Despite the father’s attempt to assure police his child was fine, things escalated.

The caseworker informed officers that DCS planned to obtain a “temporary custody notice” from a judge to remove the child for emergency medical aid.

Officers then consulted with the police criminal investigations bureau and SWAT.

I know – it is outrageous and terrifying.

After 1:00 AM, officers kicked down the family’s door.

One officer carried a shield, while another was described as having “lethal coverage.” Officers pointing guns yelled, “Chandler Police Department,” and entered the house.

The father came to the door. Officers placed him in handcuffs and took him and the mother outside. (source)

Neither of the parents was arrested.

Let’s pause here for a moment to reflect on something: Authorities took the children under the guise of caring about their well-being. The fact that armed strangers snatching children away from their parents and siblings in the middle of the night could be, I don’t know – TRAUMATIC – didn’t seem to cross their minds.

Then the “legal process” took 10 days.

The parents had to wait 10 days to see a judge and begin fighting to get their children back.

Attorneys for the parents said the children hadn’t seen each other since being taken from their parents’ home. The parents had only had one visit with their older children. DCS officials told the parents the toddler couldn’t make that visit because he was at a medical appointment.

The state’s attorney argued that the children shouldn’t be returned to their parents yet because they’d been hostile to DCS workers and weren’t cooperating. He said the parents had attended a DCS visit with members of Arizona DCS Oversight Group who were combative toward DCS workers. He said the grandfather had tried to videotape a meeting with DCS, and recording is not allowed to protect the privacy of the children. (source)

DCS wanted the parents to undergo psychological evaluations, the father was required to undergo drug testing, and the grandparents agreed to background checks so they could become temporary caregivers for the children.

While everything about this case is horrifying, there is a bit of good news.

The family has a powerful ally:

Rep. Kelly Townsend, R-Mesa, who helped craft legislation requiring DCS to obtain a warrant before removing a child from their parents or guardians in non-emergency circumstances, said she was outraged by the response of police and DCS officials in the case.

“It was not the intent (of the law) that the level of force after obtaining a warrant was to bring in a SWAT team,” Townsend said. “The imagery is horrifying. What has our country become that we can tear down the doorway of a family who has a child with a high fever that disagrees with their doctor?” (source)

In Arizona, DCS used to be able to remove children from their homes without warrants, but that changed last July when lawmakers designated limited circumstances for removing a child from their parent without a warrant:

…Concern over DCS abusing loopholes in the system prompted a second round of legislation in 2018. The restrictions designated “exigent circumstances” when DCS may remove children without a warrant. Removing the child must be so dire that there’s no time to use the electronic system to gain authorization from a judge who’s on call 24/7. (source)

Townsend wants a review of this legislation.

Townsend wants lawmakers to review the procedures that led to police using force, traumatizing a family, and putting three children in state custody.

She said that the fact that DCS obtained a court-approved warrant proves there wasn’t a life-threatening emergency.

Outside the courthouse, Townsend said she didn’t know the parents personally but was disturbed by the case.

“It was brought to my attention that these parents may have been targeted by the medical community because they hadn’t vaccinated their children,” she said.

Townsend said parents who don’t vaccinate their children because of medical concerns aren’t criminals and shouldn’t be treated as such. She worried physicians were using it as a reason to refer parents to DCS.

“I think if DCS decides to use this as a factor they would be violating a parent’s right to have a personal exemption, a religious exemption and perhaps a medical exemption,” she said. (source)

The family wants to warn others about DCS.

The father sent The Republic a statement. His family is scared, he said, but they feel compelled to warn other families:

We have been through a very traumatic experience with our encounter with DCS. We would like other parents out there to know and realize the amount of power DCS has over the welfare of your children. Even though we remain confident in our innocence through our case, it is immediately an uphill struggle of what to do or not to do. Even if you do not agree with them or the process in which they follow.

We thought they did not have the right to check on our children because they were getting better, from what they last heard about from us. We were in our home tending to our sick kids and did not want to be bothered in this tough time of illness.  With multiple children it is difficult to keep up their needs while they are ill, and to be bothered in the middle of the night by DCS was not something we were ready to tackle.

No matter what we though was right, it turned tragic with the removal of all of our children. The process of removal in our opinion was uncalled for and we would like to see the laws/process change when dealing with expedited removal of children.

Our children have sure been through a traumatizing experience and hope they have not been harmed psychologically or emotionally as we are a very happy family who love each other and would do anything for each other.

We hope to see a positive outcome for our trial, but worry about what the kids have been though. We would like to see some sort of public service announcement by DCS to inform other parents out there that this could happen to them, because nobody, especially children should have to go through what we are going through. We love our children and are doing everything possible to get them back to us. (source)

“What about parents’ rights to decide what’s best for their child?” Townsend said. “Parents felt the child was fine. Next thing we know, the Gestapo is at their door.”

The three children have been placed with their grandparents, and the parents are able to see them but have no idea when – or if – they will get them back.

What do you think about this case?

Do you think the parents handled things well? Do you believe the state acted properly? Please share your thoughts in the comments.