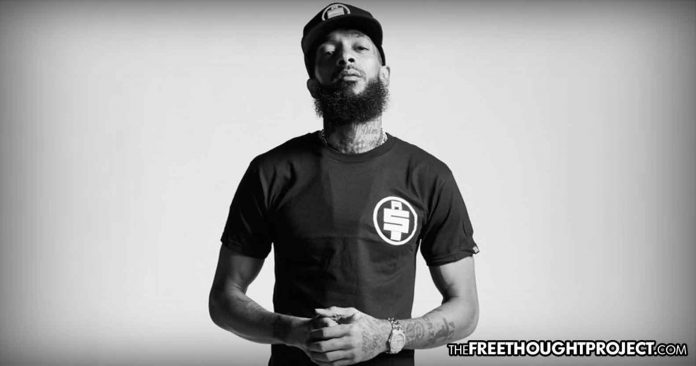 Los Angeles, CA — Nipsey Hussle was a Grammy-nominated rapper who served as an inspiration to other great musicians and athletes. At the time of his death he was working on a documentary following the life of Dr. Sebi—real name—Alfredo Darrington Bowman, and his alleged cures for cancer and AIDS. That documentary may never come to light now, because on March 31, 2019, Hussle was murdered in broad daylight outside of his clothing shop in Los Angeles.

Now, many people are coming forward to allege that this documentary was a factor in Hussle’s murder. According to Heavy, the doc, which followed the 1985 court trial in which Dr. Sebi proved he had a cure for AIDS, allegedly contained evidence that the government assisted in Dr. Sebi’s death.

Now I don’t know much about this Nipsy Hussle situation but it’s not a shocker to me that he got gunned down after he announces that he’ll be doing a documentary on Dr.Sebi’s death. Smh. #pray4nipsyhussle #NipsyHussle

Hussle, who was loved by many in the music and sports world, just a couple of hours before being shot, had tweeted, “Having strong enemies is a blessing.”

Having strong enemies is a blessing.

TFTP found a post on Facebook that also hinted at the fact that people may be coming after Hussle for his work. 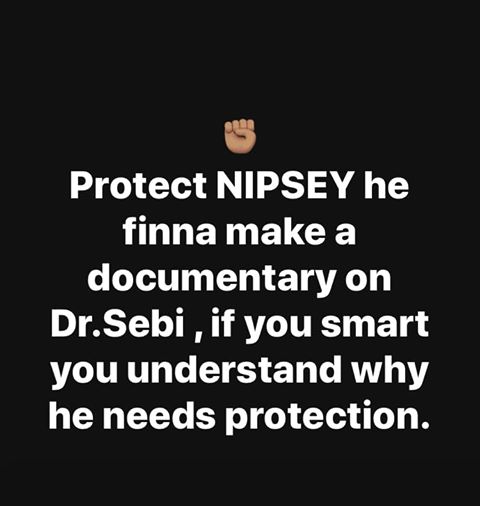 Sadly, this protection did not work.

While Hussle was an amazing musician, in more recent years, he had developed an interest in technology and community development, and he was part of a team of artists and entrepreneurs who developed Destination Crenshaw, an open-air museum devoted to honoring African-American artistic achievement, according to the LA Times.

“I think that with me being influential as an artist and young and coming from the inner city, it makes sense for me to be one of the people that’s waving that flag,” he said.

Hussle, whose real name was Ermias Ashgedom, had also become a fan of and advocate for the work of Dr. Sebi. Dr. Sebi was a controversial figure who Hussle believed was a threat to the multibillion-dollar medical industry that not only relies on continued sickness but also needs it to profit from it.

Dr. Sebi’s death was highly controversial and many believe that he was taken out for his work in allegedly curing AIDS and cancer.

According to the Root,

On May 28, 2016, Dr. Sebi was arrested at Juan Manuel Gálvez International Airport in Honduras for carrying some $37,000 in cash. He was released pending a court hearing, only to be rearrested June 3 by the Ministerio Público, Honduras’ version of the FBI, and charged with money laundering. Dr. Sebi remained in custody until Aug. 6, when he was rushed to a local hospital reportedly suffering from complications of pneumonia. Dr. Sebi died en route. He was 82.

Just last year, Hussle went on the Breakfast Club radio show and talked about his documentary on Dr. Sebi.

“I am working on doing doc on the trial in 1985. When Dr. Sebi went to trial in New York because he put in the newspaper that he cured AIDS. He beat the case. Then he went to federal court the next day, and he beat that case. But nobody talks about it,” he said.

While this may sound outlandish, it is based in truth. In 1985, Dr. Sebi was running ads in several publications saying that “AIDS has been cured.” When the New York State attorney instructed him to stop the ads, he went to court.

In court, Dr. Sebi said he had cured every single one of his patients who received his treatment, so the judge asked him to bring just one of those patients in as evidence. Dr. Sebi brought in 77 of his healed patients and won the case.

According to Heavy, this accomplishment was never celebrated or honored. The late pop star Michael Jackson, who was also one of his patients, took him down to Washington D.C. to meet with Black Congressman, but they received zero support for what should’ve been considered the greatest medical break though of the 20th century.

When Hussle explained why he felt the need to do this documentary, he said, “I think the story is important. It’s a powerful narrative. Like if someone in this room said, ‘Hey, I cured AIDS.’ I’d be like yeah, right. And then I can show you an example of him going to trial and proving in court he proved AIDS, I’d be interested in it. More so than championing his products or explaining his methodology. Put some light on that case.”

For those who may not understand the impetus behind murdering a man like Hussle, consider how powerful movies like “Leaving Neverland” or “VAXXED” have been and the damage they have done. If Dr. Sebi’s work was real, this documentary could’ve single-handedly been responsible for bringing down the medical industrial complex. CEOs, government officials, and pharmaceutical companies would have taken massive losses and potentially even gone to jail. As the old saying goes, there is no money in the cure—only sickness.

Hussle also had enemies in the financial world as he was an outspoken advocate for cryptocurrency and was instrumental in raising awareness for it.

Sadly, this documentary may never see the light of day. As to whether or not he was killed for his work, we may never know as the suspect who killed Hussle is still at large.