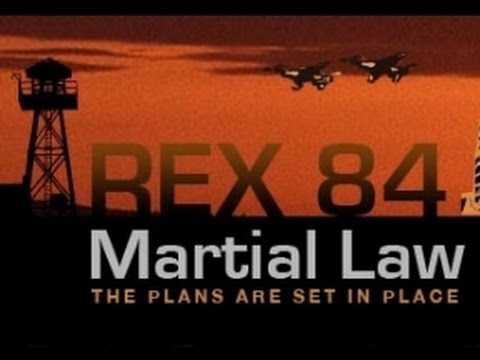 From the archives. First published February 2013.

In my mind the best chance for the American people to unite is to agree that both major political parties are responsible for the mess we are in. Yes, it is my belief that Barack Obama is a dangerous man. If you look at his history with an open mind you will find that Obama surrounded himself with those who hated America. He was mentored by known communists like Frank Marshall Davis and Bill Ayers. These men and many others associated with Obama hated everything that America the Constitutional Republic stood for.

Now a large number of Conservative Patriots, like myself, live in fear that Martial Law is coming. We have seen our president issue executive orders within the last 12 months, in case of a National Security Emergency, to take control of all communications (including cell phones and internet) and all sources of utilities/energy (including gasoline, water, and electricity). We hear of FEMA camps and continually hear leaked news from DHS inside sources who claim that Martial Law is coming soon. Most recently the plans for drone attacks against American Citizens, on U.S. soil, has been leaked. There is no doubt that these are dangerous times.

I think it is very important to entertain the idea that Obama is just the latest pawn in a grand scheme. The groundwork has been laid for decades. Both the Republicans and Democrats have for many generations supported bigger government. Talk is cheap, you must look at the actions of those in office.

Today I want to talk about FEMA camps and give you a clue as to where this all started, because developments are developments and these talks did not start with the election of Obama in 2008 or with the passage of HR 645 in 2009. Would it surprise you to know that the current model for FEMA camps was established 25 years prior to the passage of this bill, during the Reagan Administration? And that particular framework was adopted from another plan written in 1970?

I was 15 years old in 1984, and to me Ronald Reagan walked on water. He was one of my first heroes. I have since learned that I can accept a man’s good ideas and incorporate them into my own personality without having to put him on a pedestal. There were things that happened from 1981 through 1989 that should be viewed as crimes against the American people, and until we can take an objective view at history we will never learn from it.

Have you ever heard of Rex 84? Rex 84 was short for “Readiness Exercise 1984.” Allow me to digress for just a minute, because I happened to have two years of Latin in high school. Rex is also the Latin word for “King” which may be coincidence or it may not. I do find it interesting.

Rex 84 was prepared by Oliver North. Wikipedia can sum it up much better than I can:

Constitution, declare martial law, place military commanders in charge of state and local governments, and detain large numbers of American citizens who are deemed to be “national security threats”, in the event that the President declares a “State of National Emergency”. The plan states events causing such a declaration would be widespread U.S. opposition to a U.S. military invasion abroad, such as if the United States were to directly invade Central America.[1][2][3][4][5] To combat what the government perceived as “subversive activities”, the plan also authorized the military to direct ordered movements of civilian populations at state and regional levels.[6]

You can see the full Wikipedia entry here.

What I want everyone to understand is that the American people are partially at fault, due to apathy, for letting things get to this point. When our candidate wins an election it normally means that we enter a state of apathetic contentment and put the blinders on for four years. Shame on us for not watching what has been really going on. We share in the blame and we will have to fix it. Yes, it will take a revolution of sorts, whether it be with our ballots or our guns. The people must fix this. The politicians will not fix what they do not want to fix.

Let me explain myself because this is one of those posts that has the potential to make everyone who reads it angry. Many liberals know and understand that the provisions for Martial Law are in place, they just don’t believe that Obama will call for it.

Many conservatives in previous administrations knew that provisions were in place for Martial Law, but they didn’t think that a Republican president would call for it. Let me quote an interesting article written in 2006.

We are dangerously close to a situation where ~ if the American people took to the streets in righteous indignation or if there were another 9/11 ~ a mechanism for martial law could be quickly implemented and carried out under REX 84.

The Cheney/Bush administration has a plan which would accommodate the detention of large numbers of American citizens during times of emergency.

The plan is called REX 84, short for Readiness Exercise 1984. Through Rex-84 an undisclosed number of concentration camps were set in operation throughout the United States, for internment of dissidents and others potentially harmful to the state.

The Rex 84 Program was originally established on the reasoning that if a “mass exodus” of illegal aliens crossed the Mexican/US border, they would be quickly rounded up and detained in detention centers by FEMA.

Existence of the Rex 84 plan was first revealed during the Iran-Contra Hearings in 1987, and subsequently  reported by the Miami Herald on July 5, 1987

” These camps are to be operated by FEMA should martial law need to be implemented in the United States and all it would take is a presidential signature on a proclamation and the attorney general’s signature on a warrant to which a list of names is attached.”

And there you have it ~ the real purpose of FEMA is to not only protect the government but to be its principal vehicle for martial law.

This is why FEMA could not respond immediately to the Hurricane Katrina disaster ~ humanitarian efforts were no longer part of its job description under the Department of Homeland Security.  Source: http://www.globalresearch.ca/rex-84-fema-s-blueprint-for-martial-law-in-america/3010

Does this excerpt remind you of anything? It reminds me very much of the debate we are having today. Is Martial Law coming? Yes I believe it is. There are too many leaks coming out and too many signs that point to it.

But, if I am wrong, and it would not be the first time, I think that we need to learn from history. Obama did not snap his fingers and make all of this appear. Our republic has created the potential for a corrupt President to rise to the level of pseudo-dictator by giving the office too much power. If someone who hates America ever comes into power then it is not the actions of this one individual who will have brought the end of America as we know it. It is generations of both Democrats and Republicans.

Lawmakers continually use things that were put in place by previous administrations and legislatures and they twist provisions to suit the needs of the current day. They are all about big government but they are about the big government that suits them. Without fail they leave behind tools that future lawmakers can work with. Laws get amended and interpreted to suit the goals of those currently in power.

Many generations of public servants share in the blame. If a corrupt individual claims the top seat in the land they have been handed the keys to a tyrannical dictatorship, on a silver platter.

Our only chance as a nation is for the people to start to agree that there is plenty of blame for both sides, and to make both sides accountable. We have stooped so low as a nation that a known Marxist theorist is sitting in the White House because people viewed him as the lesser of two evils.

If people don’t wake up soon it will be too late. Make no mistake, there are conspiracies in place to bring America to its knees and you can trust no one in Washington D.C. and I do mean no one.

The system is broken and someday people will have to make a choice whether to submit to a tyrannical government or to rise up against it. I believe that day is very close.

But even if the day is not here, will you forget about these things in 2016 if Rand Paul is elected president? Or will you finally start to believe in the honesty and caring of your fellow man more than the words of polished speakers who are trained to make us think that they care? Power and greed are their only mistresses. They care nothing about you and I. Honest people do not make it to the top offices in this country very often. It is so rare that I would rather distrust them all then put blind faith in the 1% or 2% who may be pure of heart. I have been fooled before.

Make no mistake. The powers that be love to see the American people divided. That is how they maintain and gather more power. They are able to do this only because we let them.

Just something to think about. I will leave you today with a short video of what may very well be one of these FEMA camps. (Below is a replacement of original video, which is no longer at YouTube.)