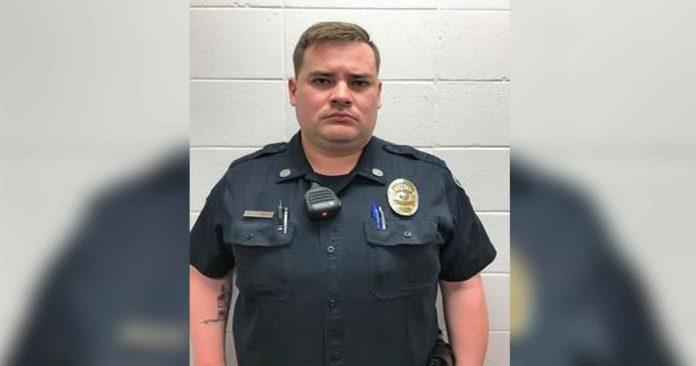 Bonner Springs, KS — As TFTP has previously reported, schools across the country are increasingly hiring police officers to do the job that teachers and guidance counselors once did. This is resulting in the criminalization of childhood as well as increased police violence against children. And, as the following case out of Kansas illustrates, these positions for school cops are being filled by alleged child predators.

Officer Mark A. Scheetz, 40, with the Kansas City, Kansas, Public Schools Police Department was arrested last week over horrifying allegations of child rape and other sex crimes against children, according to the Kansas City Star.

Scheetz was arrested in Bonner Springs on suspicion of rape, aggravated criminal sodomy and aggravated indecent liberties with a child, according to the Kansas Bureau of Investigations.

The KBI noted that the crimes allegedly occurred while Scheetz was living in Norton County between 2013 and 2015 when he allegedly “engaged in sex acts with a minor, sent lewd photos to minors and used electronic devices to solicit sex with minors.”

After the period of the alleged crimes, Scheetz sought out a career in law enforcement and became a deputy with the Sheridan County Sheriff’s Office from 2016 to 2018. He then found a job in the school district which put him in direct contact with children.

Whether or not Scheetz preyed on any of the children at the school where he worked is unknown. However, as he has been working in the school district for a year, a broader investigation has since been launched and anyone with information is asked to call the KBI at 1-800-KS-CRIME.

Scheetz is currently being held in the Norton County jail. His status us unknown.

This problem of predator police officers is to be expected as more schools opt for cops instead of civilian staff. Positions of authority — especially over children — often attract society’s worst as it allows them easy access to carry out their sick desires. Sadly, it seems, this problem is not getting any better.

According to the Department of Education, the Civil Rights Data Collection (CRDC) is a survey of all public schools and school districts in the United States. The CRDC measures student access to courses, programs, instructional and other staff, and resources — as well as school climate factors, such as student discipline and bullying and harassment — that impact education equity and opportunity for students.

The trove of data highlights a frightening state of affairs in which public schools now find themselves.

One of the trends shown in the data is the removal of guidance counselors. According to a report in the Washington Post, high school counselors often have tough jobs. They keep track of their students’ progress toward graduation. They help students apply to college and navigate the financial aid process. They also help kids navigate their lives outside of school, which can be made complex by poverty, violence and family trouble. And because counselors often are one of the first positions to be cut when budgets get tight, there are almost never enough to go around. The national average is close to 500 students per school counselor; many students have no counselor at all.

While the data shows that students have declining access to a kind and caring role model to guide them through their high school careers, the number of students who have access to a police officer is growing.

A whopping 1.6 million (k – 12th grade) students attended a school that employs a law enforcement officer — but has no counselor.

According to the CRDC report, which counted cops in schools for the very first time in 2014, 24 percent of elementary schools and 42 percent of high schools have armed police officers. In schools with higher concentrations of minorities that number skyrockets.

Video after video shows the horrific nature of such a practice as children are seen being maced, beaten, and tasered for normal childhood behaviors. And as Scheetz alleged crimes show, they are also being sexually abused.