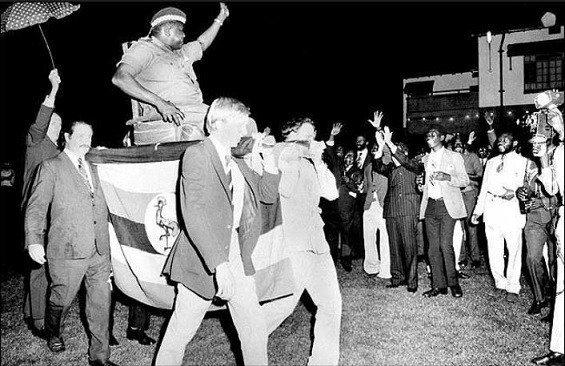 Idi Amin, the late dictator of Uganda who was said to be a cannibal, once mocked British imperialism by having four Britons carry him on a makeshift throne when he made himself President-for-Life. He called himself the “white man’s burden”. (The Telegraph)

Carmine Sabia reports for The Federalist Papers that “social justice warriors” filled with white guilt have created the Twitter hashtag #MyWhitePrivilege to apologize for being white.

Below is a sample of apologetic #MyWhitePrivilege tweets:

“#MyWhitePrivilege means most of my interactions with law enforcement are positive. I was was [sic] once pulled over for expired registration and the cop told me just to go get it renewed and send him proof that I did.” — Catherine Griwkowsky (@CGriwkowsky) March 30, 2019

“#MyWhitePrivilege allows Francis Scott Key who said ‘Africans in America are a distinct and INFERIOR race’ to write the national anthem and the song is played everywhere and demand everyone to stand. Whereas if you kneel due to injustices as black people you will be shamed. pic.twitter.com/oQDOal0hzF” — Macadon (@Macadon_YT) March 30, 2019

“Idont [sic] get scared for my life everytime I get pulled over. I dont [sic] have to worry about something in my pocket getting mistaken for a gun. I have all my doctors believe me about my pain. I have been given a leg up in life for the color of my skin #MyWhitePrivilege” — kayla cox (@kaylaccox) March 30, 2019

“#MyWhitePrivilege is that I am given the benefit of the doubt in a way my black sisters are not. Even when I am angry, I’m seen as cute and non-threatening. Sure there is a healthy dose of sexism in this, but it is a privilege to be considered non-threatening.” — Erika (@thatsdoctor2you) March 30, 2019

“I’m autistic. This guy assaulted me for hand flapping. He called it “an aggressive gesture”. I assaulted right back. I wasn’t shot. #MyWhitePrivilege pic.twitter.com/UcTa8iWE55” — Randy Germain (@ElBrutoBastardo) March 30, 2019

“When you’re born with privilege, equality can feel like oppression. To everybody complaining about the hashtag, read other peoples experiences and learn something instead of always trying to start a fight. #MyWhitePrivilege” — Bobbie Dodds (@BobbieDodds) March 30, 2019

Christopher Rivas, a Latino who calls himself a storyteller and actor, actually broke up with his girlfriend because she is white.

It’s been a year since I broke up with my girlfriend, and I haven’t told her the real reason. I talked around it, mumbling about how I was trying to figure out who I was or whatever. She didn’t understand. I’m not sure I do either. There was nothing wrong with her at all.

I don’t really know what my tipping point was. It just kind of happened. At 30, I woke up one day, took a deep breath, looked at her and thought, “I don’t think I can date white women anymore.”

Maybe I wouldn’t have broken up with her if it hadn’t been for all the judgment coming my way. Over the years I have dated brown women and black women, but mostly white women. I hadn’t thought about why that was, but when some brown and black people in my community started giving me a hard time about dating white women, I sensed they’d be happier if I stopped….

But the real reason I think I can no longer date white women isn’t any of that. It’s because in today’s hashtag-woke society, there is mad pressure to be hashtag-woke. To be aware of the implications of whom you’re attracted to and why. Which means that in the eyes of others, the color of the women I date is a big deal. Like I’m the problem. Like I’m betraying my people if I date white women.

But I was taught that we were all one people!

I see people watching me with a stink eye, noses turned up, as if they think black and brown people would somehow be better off if I dumped my white girlfriend. It’s a lot of pressure. Along with each watchful eye, the whispers of, “Pick a side, Chris, pick a side,” fill my already noisy mind….

How did we get here? If everyone is so woke, why are things so terrible? Maybe everyone isn’t so woke. Anyway, what am I supposed to do? How do I love as a brown body in the world in a way that makes everybody happy? I fell for a white woman and she fell for me — simple as that — yet I feel as if I’m doing the wrong thing by dating her.

So here I stand, trying to be woke, and not dating white women, and feeling kind of bad about that. Because I’m definitely dating, and thinking that the decision to no longer date white women might not be my own, that any decision to choose a side doesn’t help the whole hashtag-woke thing because how do we solve anything if we just separate and isolate? And also, I mean, a lot of white women are really cool.

Anyway, this is me yearning, praying, journaling, writing, dialoguing, putting up a one-man show, wishing, trying to pick a side, wondering how to choose myself and trying to wrap my head around this, hoping that I’m doing woke right, because something just doesn’t feel right.

The #MyWhitePrivilege white-guilt hashtag got some pushbacks. Here’s a sample:

“#MyWhitePrivilege is me entering the wrong class room, leaving 60 seconds later, and having the cops called on me cause someone thought I was a school shooter. Yes, this happened” – ☠