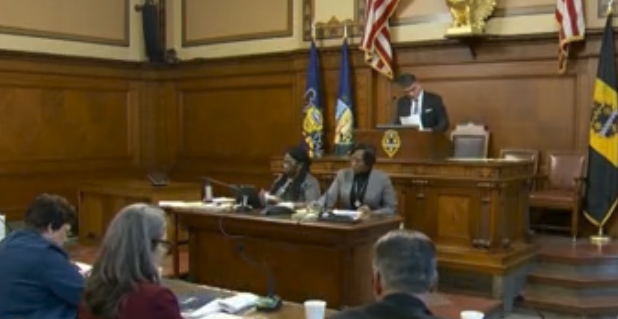 The attack on the Tree of Life synagogue building in Pittsburgh, Pennsylvania in October 2018 has given way to the tyrants of the Pennsylvania City Council approving an illegal gun confiscation package, which seeks to disarm citizens and make them soft targets for more criminals who would make easy pray for their crimes.

The public was asked to comment before the vote.

However, what someone should have said was that the council had no authority to even consider such legislation since the right to keep and bear arms is just that, a right.  It’s is not something that can be legislated away.

Council members voted 6-3 to pass the bills. They now head to Democratic Mayor Bill Peduto for his expected signature.

The legislation will place restrictions on military-style assault weapons like the AR-15 rifle that authorities say was used in the Oct. 27 rampage at Tree of Life Synagogue in Squirrel Hill, which killed 11 people and wounded seven.

It also bans most uses of armor-piercing ammunition and high-capacity magazines, and allows the temporary seizure of guns from people who are determined to be a danger to themselves or others.

The measures also ban ammunition and accessories, such as large capacity magazines, and allow courts to temporarily remove guns from a person deemed to be a public threat. A companion bill passed by the council directs additional funding to city anti-violence programs.

City residents who own guns and accessories outlined in the bills would be grandfathered. Violators of the laws could be fined $1,000, or face up to 90 days in prison, for each offense.

Second Amendment advocates say they will challenge the illegal legislation due to the fact that the city does not have authority to issue such measures.

Pittsburgh has a home rule charter, which affords the city some independence from the state legislature. But Pennsylvania’s law on the charter says a municipality “shall not enact any ordinance or take any other action dealing with the regulation of the transfer, ownership, transportation or possession of firearms.” The state’s firearms code has an amendment that expressly prohibits municipalities from regulating the “lawful ownership, possession, transfer or transportation of firearms, ammunition or ammunition components.” That inherent tension has set in motion a legal battle over gun rights in Pittsburgh and Pennsylvania more broadly.

Time went on to state something completely unconstitutional.

Pennsylvania’s legislature is the only entity that can change the state law to grant cities and municipalities the right to regulate firearms on their own, according to David Harris, a professor at the University of Pittsburgh’s law school. Right now, Pittsburgh and the courts can battle it out over the specificity of wording in the bills and the state legislation, Harris tells TIME. Because the provision from the city bans the use of certain weapons, one could argue that the state law does not technically stipulate anything about firearms usage. “In order to have this stand up, courts will have to find that the idea of using these items that are now part of the city’s law is different than all the other ways the state prohibited cities from regulating firearms,” Harris says.

Sorry, no, the state legislature has no more authority under the Constitution to infringe on the right to keep and bear arms of law-abiding citizens than the municipality does.  All gun laws are unconstitutional by the very definition outlines in the Second Amendment as a protected right.

The Pittsburgh City Council has become the enemy of the people of Pittsburgh, not it’s representation.