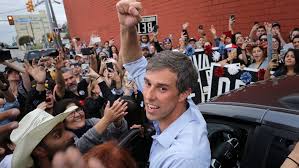 Whatever the polling numbers may say, Robert Francis ‘Beto’ O’Rourke, Joe Biden and Bernie Sanders are in a tight race to cash in on their political brands. Bobby O’Rourke is still an amateur. But he did manage to pick up $100K in campaign cash.

Democratic presidential candidate Beto O’Rourke paid roughly $110,000 in campaign funds to a web development company while either he or his wife owned it, public records show.

Either O’Rourke or his wife owned Stanton Street — a small web development firm that O’Rourke founded in 1998 — during the vast majority of those payments.

Such payments are legal, so long as the campaign is charged for the actual cost of the services, but ethics watchdogs have criticized the practice as a form of self-dealing.

Which it obviously is.

But still less outrageous than the shenanigans that Mr. and Mrs. Sanders had allegedly gotten up to.

The conflicts of interest and the impropriety are obvious.

O’Rourke didn’t break the law. But these are not the actions of the idealistic outsider that O’Rourke wants to market himself as, but as an old establishment hand who knows every angle for cashing in on his position, his brand and his image.