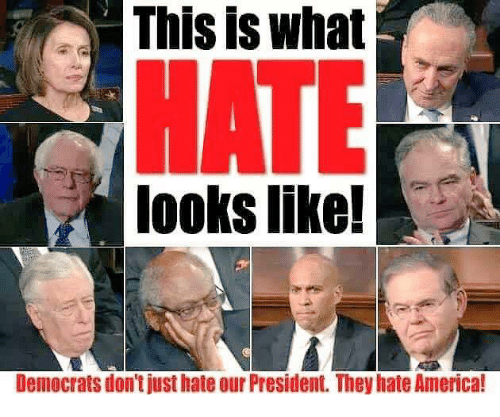 (True Conservative Pundit) I know the title may seem a little drastic, but I assure you it is not.  The Democrats of today along with their RINO compatriots (Politicrats) are nothing like the Democrat Party of old.  They at least stood for some good things and could be reasoned with – not today’s Politicrats.

The Politicrats have no values, unless you would consider obstructionism, corruption, whoring, political correctness, liberalism, socialism, communism, lying, self-aggrandizement, murder, and treason as values – then the Politicrats have all kinds of values.

The Politicrats and anyone who supports them are anti-American, PERIOD – There can be no arguing that fact anymore

Just look at the following headlines:

Boston Illegal: New DA will order cops to stop arresting criminals for breaking and entering, destruction of property or shoplifting

Rep. Jerrold Nadler – a Duplicitous and Lying Politicrat Who Poses a Grave Danger to America

I could post an article list long enough to be considered a book, but I think you get the point.  The Politicrats only support what advances their own agendas and to Hell with the American people not to mention the Constitution.

It is the Politicrats who have utterly refused to protect babies born alive after an abortion, AND even support the murder of babies AFTER they are born!  Try that at home, and you will be jailed for murder, so why is it legal in the hospital then?

The American people – whether natural born or legal immigrants, everyone here legally is being affected by our open Southern border.  News articles routinely mention people being raped, beaten, and murdered by illegals.  Notice it is the Politicrats who support keeping the border open and have fought Trump on securing it every step of the way.  Democrat politicians want to give illegals the right to vote, because they will vote Democrat.  The Politicrats also support giving illegals free health care, drivers licenses, welfare and food stamps, all paid for by the American taxpayer.

It is the treasonous Politicrats who illegally launched a covert spying program against Donald Trump, and then an illegal investigation that cost American taxpayers over 25 MILLION dollars.  Mueller, the very one who headed up this witch-hunt was also the one who helped cover up Uranium One.

The Democrats have relentlessly pursued the Trump Russia collusion hoax for over 2 years – while ignoring the true collusion between Russia and Hillary Clinton, as well as Russia and Adam shifty-Schiff. No Democrat or national media personality cried collusion concerning these events though.  Surprise? NOT.

It is also the Politicrats who want to abandon and destroy the Electoral College.  I recently wrote an article on why this is a very bad idea:

The Biggest Lie in American Politics: Abolish the Electoral College to Make Things Fair – ACTUALLY, Most U.S. Voters Will Have NO Say at All

The Politicrats will absolutely not authorize one cent to build the wall and secure our Southern border, why?  Because they want the border to remain open, illegals are the source of new voters for the Politicrats.  Illegals are also another way to destroy the United States of America from within and move us towards a One World government.

Yes I said destroy the U.S.; believe it, it WILL happen if the Democrats remain in power.  There is no maybe about this, if We the People allow the Politicrats to keep the reigns of power, We the People can kiss America goodbye.

Need some reasons to believe this?  How about these:

AOC’s Green New Deal would bankrupt the U.S. – the “deal” would actually cost more money then there currently is in the entire world.  It also calls for eliminating air travel, and all cattle, as well as tearing down or rebuilding everybuilding in the U.S. to make it energy efficient.  Seriously, how can anyone be this stupid?

The Politicrat “sanctuary cities” protect illegals from our own border patrol, including convicted murderers – and this is NOT a one time event.  They also protect drug dealers and child molesters.

The Politicrats staged an illegal soft coup attempt against Donald Trump; this is still ongoing even now. That is what the demand for Trump’s tax returns is all about, the continued investigations and subpoenas for Mueller’s full investigation file, and the Politicrats fighting every move Trump makes.  This is all designed to bring down President Donald Trump.  The Obama administration was even involved in this horrifying plot.

It is the Politicrats who support extreme political correctness and censorship along with their allies in the mainstream media and social media.  Facebook has destroyed or severely damaged hundreds of conservative websites through their censorship.  Twitter has deplatformed or shadow banned many conservative voices while allowing leftists and even Islamic killers free reign.  CNN’s elitist info-babe Christiane Amanpour recently implied that people at Trump rallies who shouted “lock her up” should be arrested and imprisoned – WHAT???  YouTube has demonetized hundreds if not thousands of channels because the channel owners presented truth – the problem here is the “truth” does not follow leftist liberal guidelines.

China has implemented a new “social credit” system that can and does disallow access to flights, trains, use of the Internet, good jobs, good schooling, and staying in a hotel among other things.  This author is here to tell you, this IS coming to America courtesy of the Politicrats.  Before you blow this all off as the crazy and ill informed ramblings of the whack-job author, please do yourself a favor and read this well written article on the topic:

The Politicrats also support the Islamists, and this is very, very dangerous.  Take Ilhan Omar for example.  She can rail and demonize Israel all she wants and hardly anyone bats an eye.  Recently she called for a jailed member of the terror organization, the Muslim Brotherhood to be released from prison.  No surprise there, a Muslim’s first loyalty will NOT be to the U.S., no it will be to Islam.  If that does not bother or scare you, then perhaps you need to read up on the Quran and Sharia Law in order to understand what they instruct their adherents to do.  Such as lie, murder non-Muslims, murder anyone who leaves Islam, mutilate female genitalia etc.

A Democratic presidential wannabe, Beto O’Rourke; has decided that anyone in America who is wealthy – well that wealth needs to be taken away and “shared” with others.  So why would anyone want to work hard anymore then, there would be no benefit to it anymore.

This author has spent a lot of time warning people, I’m just afraid that not many are listening.