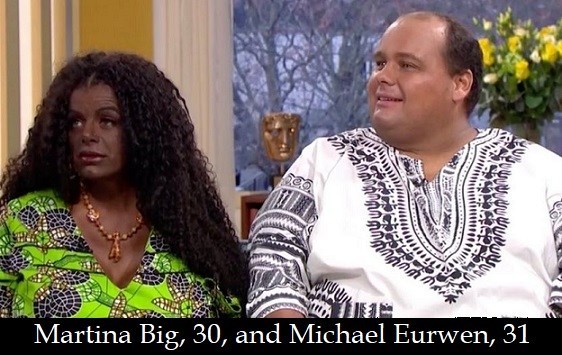 Once upon a time, white people were perceived as high status, which led to blacks and other “people of color” (including Jews) trying to emulate whites by dyeing their hair blonde, whitening their skin, and narrowing their noses and Asians getting eyelid folds with cosmetic surgery.

The roles are now reversed if we go by Rachel Dolezal who, though white and born of white parents, pretends to be blacks by tanning her skin and styling her hair. To this day, Dolezal still insists she’s black.

The latest examples of whites wanting to be black are a German Caucasian couple, Martina Big and Michael Eurwen, who darken their pale skin color with regular synthetic hormone injections.

Big’s dramatic skin color change has been well documented in recent years. When she began the injections, Big was a white-skinned model with peroxide blonde hair, but she claims that just three jabs of Melanotan has turned her skin black. Big also had multiple operations to “enhance” her breasts to size 30S.

In March last year Big flew to Kenya to be baptised as a “real” African woman, whatever that means. She now goes by the name of Malaika Kubwa, meaning Big Angel in Swahili.

The couple say they’ve been house-hunting in Kenya and hope to make a permanent move to Africa soon because they want to be with her “people” and learn how to raise a family in the African way. Big told the Sun Online: “I not only look like an African woman, I also feel that I’m now an African woman. I spent time in Kenya last year and I felt so at home. Now I have a lot of invitations from all over Africa.” She told her Facebook followers that “I want to learn more about the black culture first, so that I can educate my future children in black (teach the black culture).”

More than teaching “black culture” to her future children, Big announced on the UK “This Morning” TV show this January that she expects her future children to be born with dark skin, despite her and husband Michael both being born white.

Saying she’s “trying to understand how genetically this would be possible,” the show’s hostess Holly Willoughby asked if doctors had told Big her baby will be black. Big replied: “Yep, they said they will be black. We have also discussed about breast feeding and if it is safe for me to have a baby. Of course – it will be a mix of me and Micheal. But I’m pretty sure it will be black, but if it is milk chocolate or a little bit lighter it doesn’t matter.”

Big later said on Facebook: “Doctors say that I am physically now a black woman and my future children will be black. And I believe the doctors!”

“I’m so sorry, but no amount of cosmetic changes will affect your genetics. If you were born white, your children will be white. I think Martina needs to find a new doctor.”