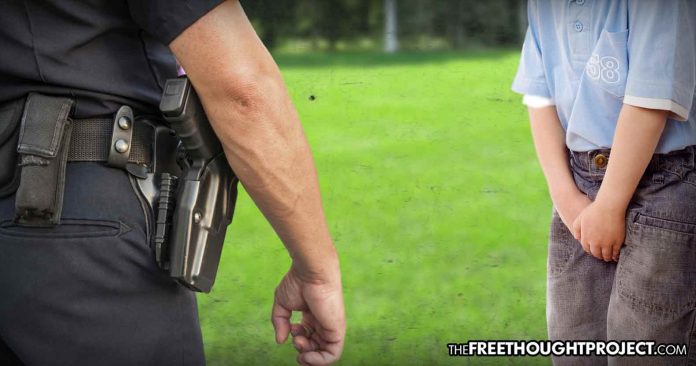 Richmond County, GA — Police officers in America have what is called ‘officer discretion’ as one of their many tools—meaning that if a police officer wants to let you go for a violation he or she thinks didn’t cause any harm, they can do just that. While they can’t make these decisions in cases of murder or other felonies, cops can most assuredly choose to ‘look the other way’ in instances like toddlers not being able to hold themselves and peeing in public. However, a deputy in Richmond County, Georgia chose to charge a mother with a crime for that very same thing.

Anyone who has had children knows that potty training isn’t the easiest thing in the world to do. And, when your newly diaper-less toddler says they have to go—they have to go.

This very scenario played out last month when Brooke Johns was driving her son Cohen home. Johns, who is 8 months pregnant was driving down Sandbar Ferry Road when Cohen let her know that he had to pee.

Not wanting her son to pee in his car seat, Johns found the closest gas station and pulled in. But she had waited too long and Cohen had to go right then. Because she is 8 months pregnant, Johns couldn’t pick up her son to carry him into the gas station, so he dropped his pants right there and started going.

“I can’t pick him up,” Johns said of her current pregnant status. “You know, I’m not supposed to lift him.”

Cohen had to go so bad, he couldn’t wait to walk in, so being the three-year-old that he is, he made the executive decision to use the parking lot.

“He was peeing before his pants were even all the way down, so obviously he had to go,” Johns said.

As the little boy relieved himself in the parking lot, a deputy rolled up and decided that this wasn’t okay.

“Accidents happen. And he was like, ‘Take him in the bathroom.’ What if I would have ran in the bathroom and someone had been in there? What was I going to let him do? Pee on the floor of the gas station?” Johns said.

Nevertheless, this cop had a job to do, so he had no other choice but to charge this mother with a crime. Instead of realizing that the 8 month pregnant mother couldn’t get her son to the bathroom in time, and the three-year-old had no other choice but to pee where he stood, this cop was sure a crime had been committed, so he hit the expectant mother with a charge of disorderly conduct.

On the citation for disorderly conduct, the deputy wrote that “she allowed her male child to urinate in the parking lot. I observed the male’s genitals and the urination. Public restrooms are offered at the location.”

Johns says she is not backing down without a fight and like so many of the parents who have commented on the Facebook post about this citation, she just wants to know why he would charge her for such an innocent situation. Johns told WRDW that she is going to court at the end of the month to fight it.

“I’m going to court April 30,” Brooke said. “Several days before I am due. Yeah, I could extend it, but I would rather deal with it when I’m pregnant. Not when I have a newborn.”