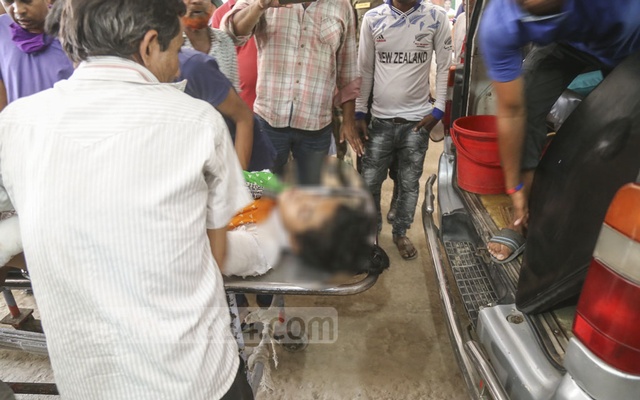 A FEMALE STUDENT OF A MADRASA HAS BEEN BURNT ALLEGEDLY BY SOME OF HER PEERS AFTER SHE REFUSED TO WITHDRAW SEXUAL ABUSE CHARGES AGAINST THE PRINCIPAL IN FENI’S SONAGAZI.

A female student of a madrasa in Feni was admitted to the DMCH’s burn unit on Saturday after she was set on fire in reprisal following sexual abuse charges against the principal.

Police had already arrested Principal Siraj-ud-Daula after Rafi’s mother filed the case against him over the alleged incident of sexual abuse on Mar 27, Rafi’s brother Mahmudul Hasan Noman told the media.The followers of Siraj threatened the family to withdraw the case, Noman alleged.

Rafi, daughter of AKM Musa from Charchandia village under Sonagazi Municipality, went to the madrasa on Saturday morning to sit for Alim exams, equivalent to HSC.

Relatives of a female student of a madrasa in Feni cry at the DMCH on Saturday. She was set on fire in reprisal after she brought sexual abuse charges against the principal. Photo: Mahmud Zaman Ovi

Police and others rescued her after hearing her cry and took her to Sonagazi Upazila Healt complex from where she was shifted to the Feni General Hospital.Rafi suffered an 80 percent burn on her body, according to Abu Taher Bhuiyan, a physician at the Feni hospital.

She was later sent to Dhaka for better treatment, the doctor said.

Pamela Geller is the President of the American Freedom Defense Initiative (AFDI), editor-in-chief of Geller Report and Amazon best selling author of the here FATWA: Hunted in America , The Post-American Presidency: The Obama Administration’s War on America and Stop the Islamization of America: A Practical Guide to the Resistance.Follow Pamela Geller on Facebook here and Twitter here.
Share
Tweet
Share
Pin