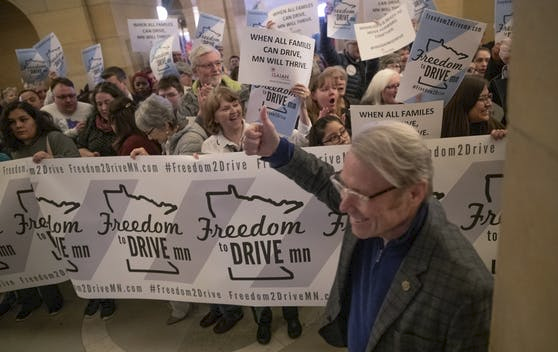 Well, just like California, the Minnesota State House voted to advance a bill, an unconstitutional one I might add, that would provide driver’s licenses to immigrants who are in the country illegally.  For those who don’t understand that, it means there are in the country in violation of law, and the Minnesota House just voted to reward those who have knowingly broken the law.

The Democratic-led Minnesota House voted Friday to give immigrants the ability to get driver’s licenses even if they are in the country illegally, setting the stage for a potential clash with Senate Republicans who argue that the change rewards those who break the law.

The 74-52 vote was a victory for the DFL House majority and Democratic Gov. Tim Walz, who have made it a top priority for this session. But it faces strong opposition in the Republican-controlled Senate, where some conservatives see it as an invitation to illegal immigration and possibly even fraudulent voting.

If the measure were to clear the Minnesota Legislature, still a distant prospect, the state would become the 13th in the nation to provide licenses to residents who cannot prove legal status, fueling the national debate over immigration and access to social benefits.

The Minnesota Voters Alliance and other conservative groups that favor stricter voter ID laws have cast the measure as part of a liberal effort to undermine the integrity of elections, a charge that DFL lawmakers denied. Minnesota has no photo ID requirements at polling stations, and the licenses mandated in the House bill would carry explicit warnings that they can’t be used for voting.

Immigrants, regardless of their status, previously were able to obtain licenses in Minnesota if they could pass the driver’s test and buy insurance. That changed in 2003 amid heightened security measures taken across the nation in response to the 9/11 terrorist attacks. The House bill would restore that right.

Actually, I’m not quite sure where the Star Tribune claims it is a “right” to get a driver’s license.  Rights come from God and if that is the case, why is there a need for a license to exercise such a right?  Me thinks they use a word they do not understand.

What’s even more incredible is that everyone knows exactly where this is going and that is so they can provide an ID when they go to vote illegally in elections.

However, this is being branded as being about safety.  Isn’t that always the claims of tyrants?

“It’s common sense,” said Rep. Samantha Vang, D-Brooklyn Center. “This will allow people to simply open a bank account, to drive safely on the road to their jobs, to their school.”

These people actually believe this will lead to safer roads by giving people driver’s licenses to drive on the road who are here in violation of the law in the first place.  No!  It actually endangers every citizen and non-citizen who are in the state of Minnesota, as well as the rest of the country to where these people might drive.

My perspective is that we want immigrants coming here legally and [to] create a ladder to the middle class,” said Rep. Glenn Gruenhagen, R-Glencoe. “Incentivizing people to come here illegally defeats that purpose.”

This is exactly right.

Muslim Rep. Mohamud Noor, whose family came to the United States after fleeing Somalia, said the bill as a “moral obligation.”

Dignity?  Respect?  Inclusion?  For people who are in violation of the law?  So, Mr. Noor wants Minnesotans to respect lawbreakers and dignify them.  Isn’t that what he is saying?  Yep, you better believe it is.

This is a man who fled a country that is dominated by Muslims, seeks refuge in America, only to then turn around and spit on the very laws which allowed him and his family a place of refuge here in the first place.

“Immigrants, whether they are documented or undocumented, are Minnesotans. They are part of the fabric of our communities,” said House Majority Leader Ryan Winkler (D).  “It is time that we helped take away this shadow of not having a driver’s license.”

No, they are not.

“Minnesota shouldn’t be in the business of incentivizing illegal behavior, and by allowing illegal and undocumented immigrants access to driver’s licenses, that’s exactly what our state would be doing,” state Sen. Bill Ingebrigtsen (R) added.

The bill is not expected to clear the Republican-controlled Minnesota Senate.

Newly elected Governor Tim Walz, a Democrat who previously served as a representative in the U.S. House, has not indicated whether he would sign the bill.

Those who voted for the measure should be considered traitors to the people they serve as they are ignoring the violations of law these immigrants are engaged in only to reward them and aid them in being successful in Minnesota while telling the people that they are simply looking out for their well-being, rights and safety.  They are doing none of that.