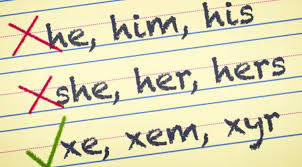 Yesterday, our Grif published an important post, “Democrats file legislation to force all Americans to accept the LGBTQ agenda,” on a bill in the House, H.R. 5: Equality Act, introduced by Rep. David Cicilline (D-RI), which would add “sexual orientation” and “gender identity” as protected classes under federal civil rights law.

If the so-called Equality Act becomes law, it would impact essentially every part of American life. Everyday Americans, especially Christians, would be penalized for not conforming to the Left’s LGBT dicta and agenda, including:

Canada is already doing that — penalizing anyone who doesn’t conform to the LGBT dicta.

On March 27, 2019, the BC Human Rights Tribunal fined Christian activist William Whatcott $55,000 CAD (US $41,298) for violating Section 7 of the BC Human Rights Code by misgendering Morgane Oger (birth name Ronan Oger), a male-to-female “transgender” and a 2017 New Democratic Party candidate, calling Oger a biological male (which is what he is) in street flyers and on the Internet.

Mr. Whatcott created a flyer entitled “Transgenderism vs. Truth in Vancouver‐False Creek” [Flyer]. In it, he called Ms. Oger a “biological male who has renamed himself… after he embraced a transvestite lifestyle”. He expressed a concern “about the promotion and growth of homosexuality and transvestitism in British Columbia and how it is obscuring the immutable truth about our God given gender”. He described being transgender as an “impossibility”, which exposes people to harm and constitutes a sin….

When Ms. Oger and her team learned of the Flyer, they had to formulate a response during their election campaign. Ms. Oger went to the police, who advised her of safety protocols. She warned her children to be wary of strangers. She describes the effect of the Flyer as destabilizing, terrifying, and searing. Ultimately, Ms. Oger was not elected in her [False Creek] riding [or electoral district].

After the election was over, Ms. Oger filed a complaint with the Human Rights Tribunal [Tribunal], alleging that the Flyer violated ss. 7(1)(a) and (b) of the Human Rights Code [Code]. Those sections prohibit publication of any statement that “indicates discrimination or an intention to discriminate” (s. 7(1)(a)), or “is likely to expose a person or group or class of persons to hatred or contempt” (s. 7(1)(b)). In response, Mr. Whatcott denies that the Flyer violates s. 7 and says that in any event his rights to freedom of speech and religion guarantee his right to distribute it. He says those freedoms are especially important during an election campaign….

In his constitutional argument, Mr. Whatcott argues that the “effect of the BC Human Rights Commission’s decision to proceed to the hearing stage in this case amounts to oppressive government action that violates the respondent’s s. 2, 15 and s.27 of the charter rights….

I can find no merit in Mr. Whatcott’s argument. The Tribunal is a creature of statute. It is bound to enforce and implement the Code, and the means by which it does this is to accept and adjudicate human rights complaints. In this decision, I have found that Ms. Oger has established a violation of s. 7 of the Code. A significant part of my analysis has entailed balancing Mr. Whatcott’s religious rights under the Charter and thus accounting for his religious freedoms. In Saguenay, the Court recognized that the application of human rights legislation may impose reasonable and justifiable limits on freedom of religion: paras. 89‐90….

Mr. Whatcott’s argument, if accepted, would require the Tribunal to reject any complaint for filing if it could impact on a person’s religious beliefs. Not only would this amount to an improper abdication of jurisdiction, but it would itself be an act of preferring one religious belief over another. “True neutrality” requires the Tribunal to abstain from such positions and rather adjudicate each complaint on its merits, weighing religious rights where appropriate: Sageunay at para. 134. That is precisely what it has done in this case.

This argument is dismissed.

I have found that Mr. Whatcott violated s. 7 of the Code. I declare that his conduct in publishing the Flyers was discrimination contrary to the Code and order him to cease the contravention and refrain from committing the same or a similar contravention: Code, s. 37(2)(a) and (b).

Ms. Oger seeks an award to compensate her for injury to her dignity, feelings, and self‐respect: Code, s. 37(2)(d)(iii). She argues that, given the nature of the discrimination in this case, the fact that it is ongoing, and that it had a serious impact on a vulnerable person, an award of $35,000 is appropriate. Mr. Whatcott opposes the award and argues it is unduly punitive….

I accept that the impact on Ms. Oger was serious….

More importantly, though, the Flyer and its potential ramifications terrified Ms. Oger….

Given the high levels of violence and hatred that are still perpetrated against transwomen in our society, it was not unreasonable for Ms. Oger to fear a violent outcome from this Flyer, even though – as Mr. Whatcott, JCCF, and CAFE repeatedly argued – there was no express call to violence within the Flyer itself. As Ms. Oger explained, it was not necessarily Mr. Whatcott she had to worry about, but the person who might be emboldened by the Flyer to act on their own hatred for transwomen….