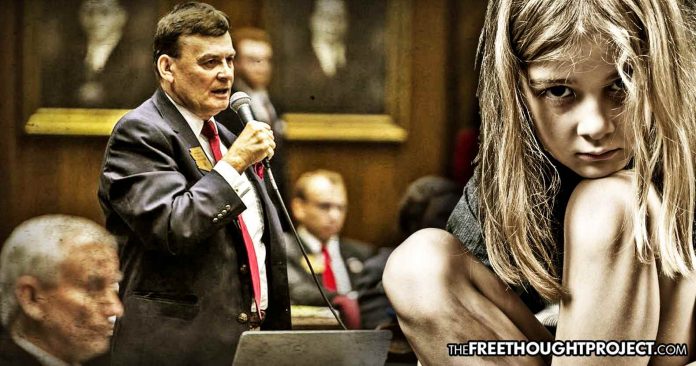 Last month, Arizona representative, David Stringer resigned from his elected position as a representative. After he resigned, records were released showing that he was arrested in the 80s for raping two children—one of whom had a developmental disability. After a subsequent investigation was launched, we are now learning about the former representative’s sick history including a recording in which he condones child sex trafficking.

In 1983, before he became a politician, Stringer was arrested and charged with raping two boys under the age of 15, repeatedly. The police report notes that Stringer picked the boys up in a park and lured them back to his apartment where he would engage in sex with them.

“(Name redacted) said that about a year ago he was in Patterson Park with a boy (name redacted) when a man stopped and asked if they wanted to go to his house and have some sex,” the report states.

“They did perform the sex act on Mr. Stringer … After this the boys were given ten dollars ($10.00) a piece and they left.”

This abuse allegedly happened on at least 10 different occasions.

Stringer denies ever raping the children and says the charges were expunged. However, the report shows he took a plea deal in the case and was sentenced to five years of supervised probation.

Also included in these newly released records are notes of a conversation that was recorded during a Facebook Live broadcast last year in which Stringer was heard saying that child sex trafficking is not a problem.

According to investigators’ notes of the exchange, Stringer and Merissa Hamilton, an activist who works to protect child victims of trafficking, were seated next to each other watching a speech from a Border Patrol agent at the event.

Their discussion can be overheard in a video, which Hamilton recorded as she live-streamed the event on Facebook.

In the video, Stringer and Hamilton discuss what issue he should ask the speaker about, and she suggests Stringer ask about child trafficking.

He responds by saying that he doesn’t think sex trafficking is a concern and said, “I don’t like to demonize it.”

After saying that he doesn’t like to “demonize” child sex trafficking, Stringer went on to say that there are “a lot of 15-year-old prostitutes.” As he claimed that a child could be a prostitute and that there are a lot of them, he can be heard laughing.

While this was all recorded, what happened in the parking lot is even worse.

After the event was over, Stringer reportedly had a conversation in the parking lot during which he defended child sex abuse.

Hamilton told investigators that Stringer said nothing was wrong with sexually abusing children.

“If an uncle takes his niece or nephew to a playground, and they go on the merry-go-round and have some ice cream, and then do their thing, that’s just part of the experience,” Stringer told Hamilton.

Stringer allegedly then told Hamilton that they could “agree to disagree” when she tried to convince him that sexually abusing children is wrong. Hamilton told investigators that she was “shaken” by the experience.

Below is the video that records Stringer’s most disturbing comments.

While Stringer thinks that child sex trafficking is not a problem and that it doesn’t happen because these children are willing prostitutes, experts, data, law enforcement, the federal government, advocacy groups, and statistics all disagree with him and note that there is indeed an epidemic of child sex trafficking in this country.

In just the US foster system, 18,000 children go “missing” every year. Many of those children are then sold into sex slavery.

Last year, U.S. District Judge Timothy DeGiusti handed down a 15 year sentence to Ralph Shortey, a former senator from Oklahoma who was caught on camera with a child in a hotel room who he had sex with.

The fact of the matter is that child sex abuse in this country takes place on a massive scale and many within the system are some of the worst abusers. To deny this exists, or attempt to condone it — as Stringer is heard doing above — means one of two things, either he is completely ignoring all the data, or he is complicit in the abuse.