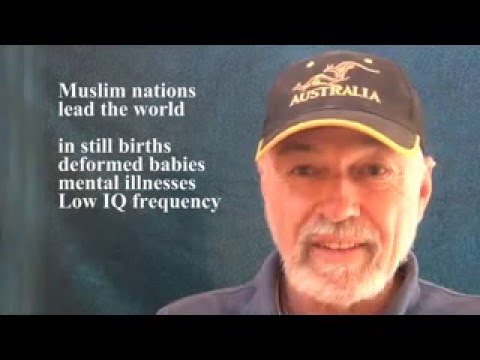 A never-spoken-about problem with Muslims is their inbreeding as a result of their long and deeply-ingrained practice of marrying first cousins — a practice that has been prohibited in the Judeo-Christian tradition since the days of Moses.

More than 7 years ago, the UK’s environment minister Phil Woolas had sounded the alarm about this “very sensitive” issue that is “rarely debated”. Referring to the culture of arranged marriages between cousins in the Muslim immigrant community, Woolas said: “If you have a child with your cousin the likelihood is there’ll be a genetic problem.”

Woolas, whose views are supported by medical experts, said most cases occur in immigrant families from rural Pakistan, where up to half of all marriages involve first cousins. Woolas said: “If you talk to any primary care worker they will tell you that levels of disability among the . . . Pakistani population are higher than the general population. And everybody knows it’s caused by first cousin marriage.”

The problem is made worse by generational inbreeding. As Woolas put it, “Many of the parents themselves and many of the public spokespeople are themselves products of first cousin marriages.” That would explain why research for BBC2’s Newsnight in November 2005 showed that British Pakistanis accounted for 3.4% of all births but 30% of all British children with recessive genetic disorders.

Indeed, an entry in Wikipedia confirms that “Cousin marriages in Muslim majority countries are often preferred and even encouraged in some regions,” and points to the fact that prophet Muhammad himself had married cousins.

But the problem isn’t exclusive to Pakistani Muslims as Woolas seems to imply, but is pandemic among Muslims across the world.

According to Nicolai Sennels, a Danish psychologist who has done extensive research into Muslim inbreeding, close to half of all Muslims in the world are inbred:

Sennels points out that cousin marriage was sanctioned by Muhammad and has been going on now for 50 generations (1,400 years) in the Muslim world. This practice of inbreeding will never go away in the Muslim world since Muhammad is the ultimate example and authority on all matters, including marriage.

Sennels warns that massive inbreeding in Muslim culture may well have done virtually irreversible damage to the Muslim gene pool, including extensive damage to Muslims’ intelligence, sanity, and health. (Similar effects were seen in the Pharaonic dynasties in ancient Egypt and in the British royal family, where inbreeding was the norm for a significant period of time.)

Below are the consequences of inbreeding:

2. Physical and mental retardation and illnesses:

All of which would explain the following phenomena among Muslims (Source: Nicolai Sennels):

Muslims’ average lower IQ means a lowered ability to enjoy and produce knowledge and abstract thinking, which would explain why:

The troubling reality being referred to is the widespread practice of Muslim inbreeding and the birth defects and social ills that it spawns.

The tragic effect of the Left’s control of the boundaries of debate is that any discussion about vital issues such as these marks an individual as an “Islamophobe” and a “racist.”

A person who dares to point at the pathology of inbreeding in the Muslim community is accused of whipping up hatred against Muslim people.

But all of this could not be further from the truth. To fight against inbreeding anywhere is to defend humanity and to defend innocent babies from birth defects….

Let us keep in mind that Muslims are the first — though maybe not the biggest — victims of Islam….

In fact, it is the Left’s callous silence on this issue (and on so many others) that exposes who is truly “anti-Muslim.”