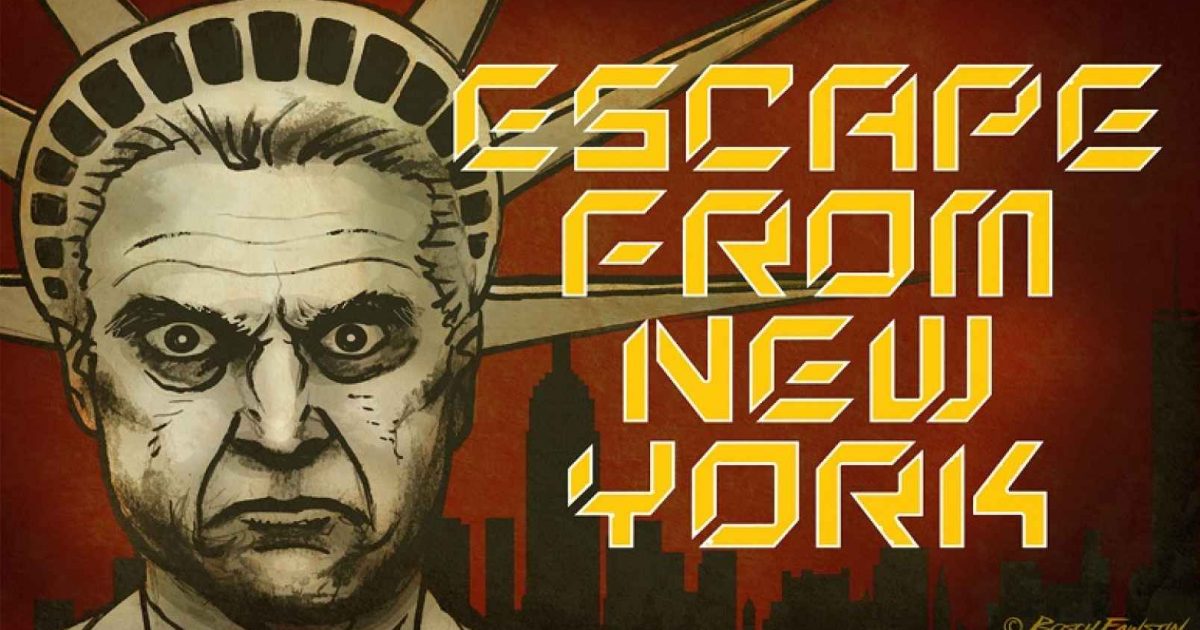 In the movie Escape From New York

, the island of Manhattan was walled off and mined. For its fortieth anniversary, New York City will try to recreate its plot by walling off parts of Manhattan with toll booths. The walls of toll booths to impose congestion pricing on the locals will fulfill the dream of former Mayor Bloomberg whose wildest ideas now seem downright tame to the new Dem radicals.

You could try to bypass the toll booths along 61st Street by taking an Uber, but good luck.

New York City has also been leading a crackdown on ridesharing on behalf of taxi drivers who began committing suicide because they were no longer able to overcharge, rip off and rob tourists. Uber will be capped, taxed and pushed out of the city along with all the other cars to encourage people to use public transportation. Unfortunately, public transportation doesn’t work anymore.

You can still ride a bike

if you don’t mind suffering bruises, bumps and skull fractures.

The New York City subway is failing badly. To quote the New York Times, “Century-old tunnels and track routes are crumbling… Just 65 percent of weekday trains reach their destinations on time, the lowest rate since the transit crisis of the 1970s”. Cars are being taxed to help fund this collapsing system. But the problem isn’t a lack of money: the money is being diverted by unions and political sweetheart deals.

Record numbers of New Yorkers are fleeing the Democrat disasters of the city and the state. But escaping New York by renting a car will also be more challenging because the state budget also includes a new tax on car rentals. And don’t even think of trying to fly out of one of New York’s terrible airports.

Walling off parts of Manhattan behind toll booths will make food deliveries much more expensive. And so, the disastrous state budget deal also bans plastic bags to make shopping for food equally miserable whether you do delivery or go to the supermarket. And don’t imagine for a moment that asking for paper will get you a pass. Paper bags will also be taxed because going to the supermarket is a crime.

Unlike Snake Plissken, once you escape from New York, your troubles will just be getting started. If you leave any property behind, the New York State Department of Taxation and Finance will pore through your cellphone records, stalk your Facebook feed, stop off at your dentist’s office, and even check your fridge to prove that you still live in the Big Apple, and should be paying Governor Cuomo’s new salary.

But for those New Yorkers who stay behind, life keeps getting worse.

“This budget is probably the strongest progressive statement that we’ve made,” Governor Cuomo declared, referring to the bizarre mess that the Democrat-controlled legislature pieced together at 2.30 AM for no reason except corruption and a burning hatred for everyone living above 61st Street.

While the state budget was terrible news for people, it was great news for criminals.

“I’d say about 85 percent of the population will now be looking at a cashless bail system,” Assembly Speaker Carl Heastie, D-Bronx, had boasted.

Because the one thing that the Bronx desperately needs is more criminals wandering its streets.

There was also good news for the state’s most successful criminal element with $100 million in taxpayer funds going to a commission, 6 of whose 9 members will be appointed by Democrats, to finance political campaigns. Political consultants in New York are now an official public subsidy and a welfare class.

Governor Cuomo will also get a 40% pay hike. It’ll take a lot of paper bag taxes to pay for that.

And, because New York State Dems now make Bond villains look like decent folks, there’s a $100 million tax on pain medications. If you’re suffering in pain, you will end up paying more for your medications.

When you need $100 million to pass on to politicians, why not take it from those who are suffering?

What kind of politicians raise taxes on people living in literal agony? Democrats.

Taxes have often been called a pain, but New York Democrats have achieved a true first by actually taxing pain. This Torquemada taxation is a new low even for New York’s pro-infanticide Democrats.

The only possible next step is to actually tax each individual scream.

New York Dems started out by pretending that they were trying to “help” fight opioid addiction with their pain medication tax and were protecting consumers. Now the mask is off and the official wording reads, “The economic incidence of the tax imposed by this article may be passed to a purchaser.”

That’s a very legalistic way of saying that New York Democrats are offering their suffering victims a choice between screaming in pain and paying more money to the corrupt Democrat machine.

Stealing candy from babies would have been halfway civilized by comparison to this horror.

The new leftist Dems boast about how they’re destroying the old Democrat machine. But even Tammany Hall, for all of its greedy crimes, would not have stooped to this level of barbarism.

Only political monsters tax pain and torture people for money. Albany is now crawling with them.

But that’s how you get to a $175 billion budget. You do it by stealing from everybody and their grandmother, her paper bags and her pain medication. You recreate Escape from New York on 61st Street, you make it impossible to travel within the city and then you check the fridges of the escapees.

Assemblyman Doug Smith, a Republican, said that the only thing missing from the “midnight budget deal was a mask and gun.”

The complete contempt of New York Democrats for the rest of the state was captured in one single exchange during the bag debate between Senator Kaminsky and Senator Funke.

“If I have old Wegmans plastic bags at home, can I bring them to the store and use them again?” Senator Funke asked.

Wegmans is a popular supermarket chain with plenty of stores in New York. But none in New York City. Senator Funke is a 70-year-old Republican. Senator Kaminsky is a 39-year-old former federal prosecutor occupying a Republican seat after Senator Skelos was taken down by disgraced former federal thug Preet Bhara, who appeared to be clearing his own way to power until Trump showed him the door.

Bhara has yet to slime his way into public office, but Kaminsky made it in by a few hundred votes.

Democrats occupied New York’s Senate, traditionally a Republican stronghold reflecting the larger state, by thuggish tactics. The purge of Republicans and moderate Democrats, like Sheldon Silver, paved the way for the takeover of both houses by a new Dem majority of crooks, extremists, bigots and lunatics.

Or there’s Senator Julia Salazar who has been accused of being all four of these.

Senator Kaminsky’s victory represented a crucial seat in establishing a ‘Californian’ legislature in New York eager to pass any leftist agenda, no matter how crazy, abusive or irresponsible it might be.

Banning bags, forcing people in pain to pay more for their medication, walling off parts of Manhattan, and freeing criminals are the wages of a one-party state assembling dirty deals at 2.30 in the morn.

The consequences of a powerful Democrat majority in New York can be seen from 61st Street to your local supermarket and pharmacy. But more broadly, they mean driving everyone who works for a living out of the state, if they can find a way to get out, and then robbing them some more on the way out.

New York is suffering the steepest population losses of any state. New Yorkers are fleeing to places where they can afford a car, a home and medications. Where they can shop at a supermarket or order takeout, where they can cross the street without running into a tollbooth, and where they can be free.

And they’re getting out before the walls go up around Manhattan and the bridges are mined.