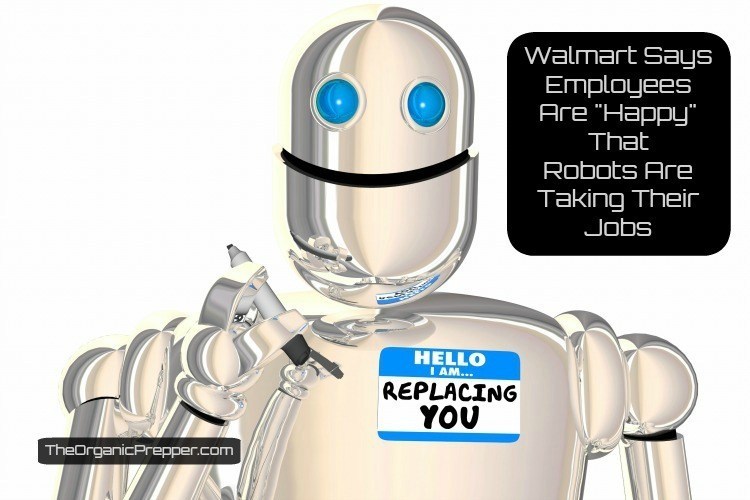 Self-checkouts have been replacing human employees for quite some time, and now robots are taking other jobs.

Walmart is replacing some employees with robots.

Yesterday, the Wall Street Journal reported that Walmart is deploying robots to carry out mundane tasks like mopping its floors and tracking inventory as it seeks to cut down on labor costs after raising wages last year.

Walmart, which is the largest employer in the US, said at least 300 stores will introduce machines that scan shelves for out-of-stock products. Meanwhile, so-called “autonomous floor scrubbers” will be deployed in 1,500 stores, and conveyor belts that automatically scan and sort products as they are loaded off of trucks will more than double to 1,200. Another 900 stores will install 16-foot-high towers that will allow customers to pick up their online grocery orders without interacting with humans. (source)

Naturally, the mega-retailer wants us to believe that robots taking over certain tasks in their stores is a good thing – a change that will allegedly benefit their human employees. “With automation, we are able to take away some of the tasks that associates don’t enjoy doing,” Mark Propes, senior director of central operations for Walmart US, told The Wall Street Journal. “At the same time, we continue to open up new jobs in other things in the store.”

The company said the addition of a single machine can cut a few hours a day of work previously done by a human, or allow Walmart to allocate fewer people to complete a task, a large saving when spread around 4,600 U.S. stores. Executives said they are focused on giving workers more time to do other tasks, and on hiring in growing areas like e-commerce.

Store workers spend two to three hours a day driving a floor scrubber through a store using the manual machines, said a company spokesman last year. The automatic conveyor belts cut the number of workers needed to unload trucks by half, from around eight to four workers, said executives at a company presentation last June. (source)

The retail giant claims employees are fine with this.

In a press release titled #SquadGoals: How Automated Assistants are Helping Us Work Smarter, Walmart refers to the robots as “smart assistants” and claims that the response from associates has been “overwhelmingly positive” so far:

“Our associates immediately understood the opportunity for the new technology to free them up from focusing on tasks that are repeatable, predictable and manual, “said John Crecelius, senior vice president of Central Operations for Walmart U.S. “It allows them time to focus more on selling merchandise and serving customers, which they tell us have always been the most exciting parts of working in retail.” (source)

Some employees might be happy now, but what if they eventually end up with robot supervisors? A recent report from The Guardian titled UK Businesses Using Artificial Intelligence to Monitor Staff Activitydescribes a system called Isaak that is being used to monitor the actions of 130,000 people in the UK and abroad in real time. Isaak “scrutinizes staff behavior minute-to-minute by harvesting data on who emails whom and when, who accesses and edits files and who meets whom and when” and ranks staff members’ attributes, according to the report.

Will robots and humans work well together?

Phil Duffy, innovative vice president of Brain Corp., the company that developed the software that allows the robots to function, told WSJ that machines and humans will work in harmony as “operational partners.” He added that in a tight labor market, it’s difficult for employers to fill some of these low wage positions.

“It’s very hard for employers to get the workforce they need,” Mr. Duffy said. “None of the customers we’re working with are using our machines to reduce their labor costs; they’re using them to allow their teams, their janitorial teams, to perform higher-value tasks.”

Retailers and other companies that hire large numbers of low-skilled hourly workers are increasingly looking to automation as they face higher labor costs and aim to improve retention amid the lowest unemployment in decades. Target Corp. added machines to count cash to backrooms of stores last year, following a similar move by Walmart.

Remember that AI can develop prejudice and hate without human input, and apparently does not have a good sense of humor. Those don’t sound like good qualities to have in coworkers or supervisors.

Robots are expected to take more jobs in the future.

While Walmart and other retailers may like to spin the impending robot workforce takeover as a positive thing for humanity, in reality, it “is an issue of growing concern for many employees across a range of industries,” reports Digital Trends:

The matter was brought into sharp focus by the World Economic Forum last year when it forecast that machines may be capable of performing half of all “work tasks” globally by 2025 — that’s equal to around 75 million jobs — though we should point out it also estimated that more than 130 million human jobs could be created during the same time-frame. (source)

Late last year, in an article titled Replaced by Robots: 10 Jobs That Could be Hit Hard by the A.I. Revolution, Digital Trends listed professions (including some that will surprise you) that will likely suffer the effects of an AI takeover:

There’s no doubt that artificial intelligence (A.I.) and other cutting edge technologies are going to change the face of employment as we know it. According to one famous study, 47 percent of currently existing jobs in America are at high risk of potential automation in the coming decades. (source)

Retail jobs are disappearing at an alarming rate.

A retail apocalypse has been escalating for several years, and job losses have been piling up. Retail has already lost 41,000 jobs this year – and that isn’t including the numbers for March, as SHTFplan.comreports. “This is significant, and marks an acceleration of store closures and job cuts in the near term,” said Mark Hamrick, a senior economic analyst at Bankrate. “Retail is ground zero for seeing the shifts of change in our lives.”

Now it appears that remaining retail positions are increasingly at risk of being lost to artificial intelligence. How long until humans are rendered entirely obsolete?

The late Dr. Stephen Hawking warned us that robots will eventually take over. In 2014, he told the BBC:

The development of full artificial intelligence could spell the end of the human race. It would take off on its own, and re-design itself at an ever-increasing rate. Humans, who are limited by slow biological evolution, couldn’t compete, and would be superseded. (source)

What do you think about this?

Do you think robots will eventually replace human workers entirely? If so, how soon do you think it will happen? Please share your thoughts in the comments.