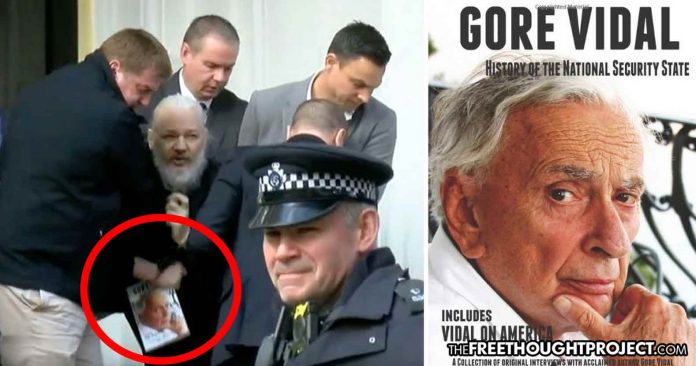 On Thursday, several men in black suits, surrounded by a dozen cops, raided the Ecuadorian embassy in London and kidnapped Julian Assange. Moments later, the Department of Justice released a statementcharging Assange with computer hacking “conspiracy” for allegedly working with US Army soldier at the time, Chelsea Manning. Assange was in handcuffs when he was brought out and as he was being dragged from the embassy, he managed to grab the book, Gore Vidal: History of the National Security State. As he was shoved into the van, Assange held the book facing forward so that it could be seen by the camera.

Vidal was born inside this system, educated in expensive private schools in Washington DC and grew up, quite literally, surrounded by the elite. His father was a high ranking official in the Franklin Roosevelt administration and his grandfather was US senator Thomas Pryor Gore (D-Oklahoma). He was incredibly smart and would eventually become a best-selling author.

In his 30s, after writing a series of mainstream novels, Vidal decided to try his hand at historical fiction. This decision would set him on a path to waking up to the atrocities carried out by the United States dating back to Abraham Lincoln.

Vidal was one of the first public figures to question the motives and wisdom of Lincoln—and he was lambasted for it. Despite bipartisan attacks on all fronts for his critical skepticism of the United States, Vidal’s six-volume “American Chronicle” series of historical novels about the United States became best sellers.

As the years went on, Vidal became outspoken about the rise of the military industrial complex and predicted the very situation we find ourselves in today.

“USA belongs to a handful of men who also control the media. Look at General Electric. It produces nuclear weapons for the Pentagon and also owns the NBC News cable channel, which is a very sophisticated censure apparatus, intrinsic to the system. It’s genius. It’s like an electronic cage around the nation which blocks information from getting through.” ~ Gore Vidal

In the book Assange was pictured holding, Vidal explained how the United States established the “massive military-industrial-security complex” and the “political culture that gave us the ‘Imperial Presidency.’”

The book was written by Vidal and The Real News Network senior editor Paul Jay. In it, the two dissected the apparatus that would eventually facilitate Assange’s arrest. Through propaganda and manipulation, the establishment has tricked the masses into accepting their corrupt order as the norm. Both Vidal and Assange knew this.

“It doesn’t actually make any difference whether the President is Republican or Democrat. The genius of the American ruling class is that it has been able to make the people think that they have had something to do with the electing of presidents for 200 years when they’ve had absolutely nothing to say about the candidates or the policies or the way the country is run.” ~ Gore Vidal

In the book, Vidal explains the false history of the US and how this false history is used to manipulate people into supporting mass murder and corruption.

“I think everybody should take a sober look at the world about us, remember that practically everything that you’re told about other countries is untrue, what we’re told about ourselves and our great strength and how much we are loved – forget it,” wrote Vidal.

“Our strength is there, but it’s the kind of strength that blows off your hand while you hold up the grenade; it’s a suicidal strength as well as a murderous one.”

Although Vidal died before realizing the plight of Julian Assange and the attack on the freedom of the press that it represents, he saw it coming decades in advance.

The DOJ says part of what Assange did to justify his prosecution – beyond allegedly helping Manning get the documents – is he encouraged Manning to get more docs for him to publish. Journalists do this with sources constantly: it's the criminalization of journalism pic.twitter.com/GXNjWlkFZw

Sadly, not many people heeded Vidal’s words and we are witnessing a full scale attack on true independent journalism as we know it, and we are seemingly powerless to stop it. This is likely the reason Julian Assange grabbed that book and made sure we saw it as he yelled out through dozens of cops that we “must resist.”

Though Vidal had become somewhat cynical in his final years, his wisdom can help to free us from our self-imposed slavery of worshiping corruption and statism.

Julian Assange is a hero. His actions helped to expose horrifying crimes carried out by the US government, including mowing down innocent journalists with a .50 cal. His persecution by the UK and the US is retaliation and punishment for exposing these crimes and their actions, as Assange said, must be resisted.

If this established behemoth of media, government and tech giants are allowed to persist and snub out the independent press—as they are currently doing—we may soon realize George Orwell’s prediction of a boot stomping on a human face—forever.

Like Vidal, Assange wanted people to know true history as this is the path to peace. “If wars can be started by lies,” Assange so eloquently noted, “they can be stopped with the truth.”

“You assist an evil system most effectively by obeying its orders and decrees. An evil system never deserves such allegiance. Allegiance to it means partaking of the evil. A good person will resist an evil system with his or her whole soul.” — Gandhi #FreeJulian pic.twitter.com/KuxjsUwcq8