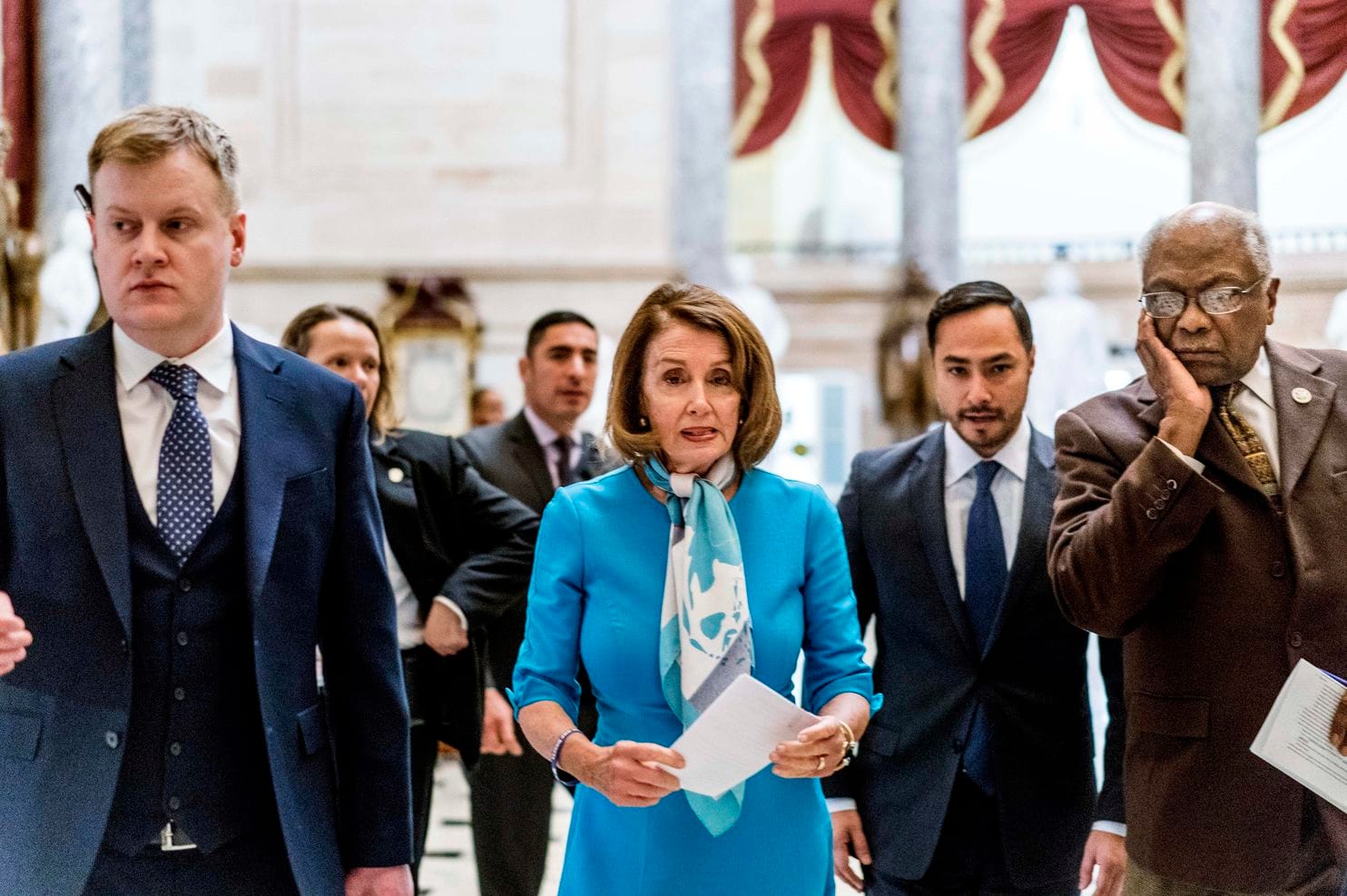 (True Conservative Pundit) The House Democrats are having their annual retreat, and it is themed as the article title says, “fighting for the people.”  This is truly laughable – the opening event of the retreat is titled: “Who Are The People?”  So, let me see if I have got this straight, the Dems are focused on fighting for the people, but have no idea who the people are.  That sounds about right for the Democrats.

The next event at this retreat is headlined by a pair of real winners, celebrity couple John Legend and Chrissy Teigen – who advised women to say “f**k you” more often to President Trump.  Classy.

You see, the Democrats are incapable of fighting for We the People, because they are too busy attacking President Donald Trump.  There is no Democratic agenda that will benefit the people, on no, the agenda is dominated by damaging and ultimately destroying the potentially best president America has ever had.

The Democratic assertion that they are in any way shape or form fighting for We the People is a joke, only it’s not at all funny.  The Democrats are fighting for their own power, their self-perceived rightful place as America’s defenders, the ones who get it done.  Except that all the Dems are getting done is wasting tax money on more useless investigations of President Trump despite the Mueller Report saying there was no collusion.  Nope, there is for sure collusion; they just haven’t found it yet.

Please don’t be fooled America, the Democrats and their RINO allies (Politicrats) are not standing up for We the People.  They are standing up for me, myself, and I – and you can throw in the Democrat Party here too.  The Politicrats do not come with solutions in hand, or if they do, their solutions, such the Green New Deal are so ridiculous as to be on the level of what an elementary school student could prepare.

The other dilemma is that the Politicrats instead of trying to work with others and come up with legitimate solutions to America’s problems – these fools would rather spend their time and our money attacking Trump and anyone who supports him.

The Politicrats also refuse to take any responsibility for their actions whatsoever.  Instead they pursue endless phony and illegal investigations when they are the ones who need investigating.  They engage in hate, pandering to their indoctrinated base, lying, censorship, and manipulation.

Then there are the former government officials, like John Brennan, now making a nice living by shooting off their mouths every chance they get on CNN and MSNBC and the like.  Who cares what these bought and paid for Democrat loyalists have to say?

The Democrats and their besties, the mainstream media are all a bunch of narcissistic and pathetic liars repeating the same old tired talking points that don’t hold water for anyone who can rub two brain cells together.

Journalism is a joke with these people, they would not recognize real journalism if it walked up and slapped them in the face.  Facts no longer matter, and opinion is construed as facts.  The leftist agenda is preeminent and is to be achieved using any means necessary.  The Politicrats and the media will outright lie, make up stories, refuse to report anything they decide We the People should not see, and they saturate the airwaves with one person after another regurgitating the same illegitimate B.S. while attacking anyone who dares to question them.

If one dares to state the facts, they are immediately attacked for doing so.  William Barr, the Attorney General stated that he did in fact believe spying occurred on the Trump campaign.  There is plenty of evidence that this is exactly the case.  Not according to these talking heads:

Morning Joke co-host Joe Scarborough had this to say:

“He knows that what he’s saying is unbelievably reckless.”

.@JoeNBC on AG Barr’s spying claims: “He knows that what he’s saying is unbelievably reckless.” https://t.co/1m7D7d6Hwk

So investigating a sitting president with no evidence of a crime isn’t reckless?  Spying on the opposition’s campaign based on knowingly fraudulent information isn’t reckless?

Former CIA Director John Brennan was “disappointed” in AG Barr’s comments on the fact that U.S. intelligence spied on the Trump campaign.

Really?  Disappointed in what?  That Barr told the truth?

“I have no idea what he’s talking about, so it’s hard for me to comment.”

House Speaker Nancy Pelosi said she was dismayed and disappointed that Barr is “going off the rails.”

Nice try Nancy, this coming form the one who famously stated that, (I’m paraphrasing here) we have to pass this bill to see what’s in it.

Do you see a pattern here?  Anything the Politicrats disagree with is a lie, it’s collusion, it’s dangerous, it’s disgraceful, it’s hurting our country, it’s conspiracy talk, it’s the Republicans refusing to “come to the table,” it’s divisive, it’s racist, it’s illegal, it’s unconstitutional, it will harm We the People, it’s bad for climate change, and any other drivel they can think up.

But low and behold, if you are a Politicrat, you have carte blanche to say and do anything and get away with it.

Newly elected Muslim Rep. Ilhan Omar recently referred to the 9/11 attacks as “some people who did something,” which really upset a lot of people.  Omar’s comeback to being accurately quoted on this?  This is “dangerous incitement.”

America is being betrayed from the inside and the truth is worse then you think.  I wrote in a recent post thatDemocrats and their sympathizers HATE America, the Politicrats don’t stand for anything of value, rather their stance is based on hatred for Trump, identity politics, power, money, and self-aggrandizement.

The Democrats are openly and fully embracing socialism, it’s their hot new baby and they can’t wait until it grows up. Anyone who has, it will be taken away and given to everyone else that did nothing to earn it, that is socialism as defined by the Politicrats.

So you see, it is the absolute truth that the Politicrats really and truly do NOT know who the people are.  Because I refuse to believe that when We the People understand what the Dems are attempting to all do – that the people will lend their support to these thieves and destroyers of freedom and the American way.

One last thing – recently some college students, who mostly are indoctrinated liberals were approached and asked if they supported the Green New Deal, which exemplifies what socialism is all about.  At first the answers were positive, then when they were told exactly what the plan entails such as eliminating so-called fossil fuels, a basic income for those who choose not to work etc., then these same students soundly rejected this ridiculous plan.  You can watch the video interview here.

Speak up and speak out America, the leftists have no support when the truth is known.  If the Democrats regain complete power, America WILL cease to exist as we know it.

Don’t say you were not warned.