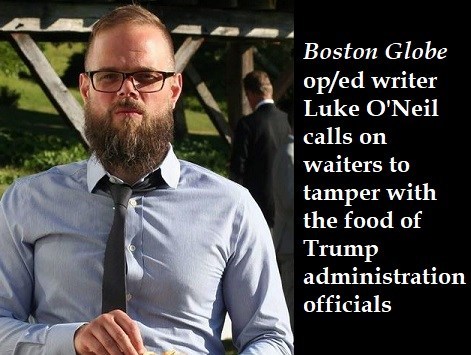 We are told a democracy can only work and get things done when political parties and opponents compromise because in a democracy, winners are only temporary victors until the next election. And so political opponents each gives up something, in order to gain something. It’s not all or nothing.

But in the (dis)United States of America today, Democrats and the Democrat Party have neither interest nor disposition to compromise. Even worse, they openly call for and inflict violence on those who disagree with them. Some examples:

The latest is a Boston Globe op/ed, penned by former waiter Luke O’Neil, calling on waiters to poison (“tamper with”) the food served to Trump administration officials.

On Wednesday, April 10, 2019, the Boston Globe published the op/ed by Luke O’Neil — a one-time waiter who free-lances for the Guardian, The New York Times, New York magazine, and other publications.

Soon after the op/ed was published, Boston Globe scrubbed the op/ed’s first sentence, “One of the biggest regrets of my life is not pissing in Bill Kristol’s salmon,” and appended a prominent editor’s note saying “A version of this column as originally published did not meet Globe standards and has been changed. The Globe regrets the previous tone of the piece.” A day later, the Globeremoved the op/ed entirely from its website, with the excuse that “the column did not receive sufficient editorial oversight.” (Fox News)

Incredibly, after spending two hours scouring the web, I cannot find any website, even AltMedia ones, that re-published the entirety of O’Neil’s poison-food op/ed, not even Internet archives. I could find only these excerpts of the op/ed:

One of the biggest regrets of my life is not pissing in Bill Kristol’s salmon. I was waiting on the disgraced neoconservative pundit and chief Iraq War cheerleader about 10 years ago at a restaurant in Cambridge and to my eternal dismay, some combination of professionalism and pusillanimity prevented me from appropriately seasoning his entree. A ramekin of blood on the side might have been the better option, come to think of it. He always did seem really thirsty for the stuff.
I was reminded of that episode this week when Secretary of Homeland Security Kirstjen Nielsen, the purportedly reluctant triggerman for Donald Trump’s inhumane policies of ethnic cleansing, announced she would be stepping down from her post at the president’s request. The news comes a little over a year since she took the job, and about nine months since she was infamously shame-marched out of a restaurant — a Mexican one of all things — in Washington, D.C., by a group of protestors just as the news of our official policy of separating families at the southern border was first being reported on. What a delight it was to see.
Around the same time, White House Press Secretary Sarah Huckabee Sanders and others in the administration or associated with Trump — such as Florida Attorney General Pam Bondi, Mitch McConnell, and white nationalist and dirty coward from the zombie movie who gets everyone else killed Stephen Miller . . . . .

Living in Boston, we’re no strangers to visitors from any administration, whether they’ve been given a lecture role at a school like Harvard — which doesn’t seem to have any compunctions about welcoming literal comic book-style villains to campus — or of any of a number of other prestigious tech or academic institutions in the area. Invariably the bad guys, like the rest of us, will have to eat. And when they show up in our restaurants, you have my permission, as an official member of the mainstream media, to tell them where to go and what they can do with themselveswhen they arrive there, but, you know, said in a more specific and traditional Boston colloquialism.

As for the waiters out there, I’m not saying you should tamper with anyone’s food, as that could get you into trouble. You might lose your serving job. But you’d be serving America. And you won’t have any regrets years later.

Some years ago, I reluctantly came to the conclusion that the differences between Conservatives and the Left — in fundamental values, world views and goals — are so divergent, they are irreconcilable.