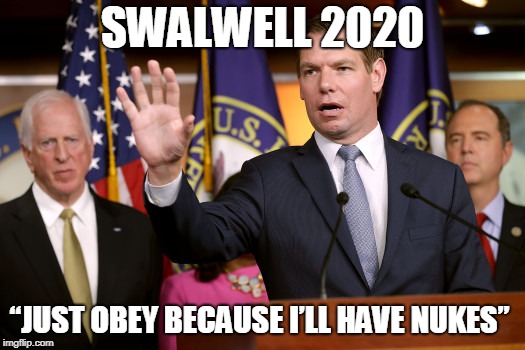 Rep. Eric Swalwell, 38, is a California Demonrat who represents the 15th congressional district in the San Francisco Bay Area.

On April 8, 2019, Swalwell joined the growing list of hate-America freaks and communists who’ve announced their candidacy for the 2020 Demonrat presidential nomination. Swalwell fittingly chose as the venue to make his announcement, the late-night talk-show of another Demonrat, Stephen Colbert.

Elected to the U.S. House of Representatives in November 2012, Swalwell is a strong supporter of abortion and LGBTs. He is also not just an advocate of gun control, he wants government to confiscate whatever guns we have and if we resist, the government would “nuke” us.

As I’d posted last November, Swalwell wrote in a USA Today op/ed, “Ban assault weapons, buy them back, go after resisters,” that he and other Democrats had been too deferential to Second Amendment activists, and urged that all “military-style semiautomatic assault weapons” be outlawed and confiscated.

So basically @RepSwalwell wants a war. Because that’s what you would get. You’re outta your fucking mind if you think I’ll give up my rights and give the gov all the power.

To which Swalwell tweeted this threat, which he later said was “sarcasm”:

And it would be a short war my friend. The government has nukes. Too many of them. But they’re legit. I’m sure if we talked we could find common ground to protect our families and communities.

On January 4, 2019, on syndicated radio’s “Hugh Hewitt Show,” Swalwell cautioned his fellow House Demonrats against voting to impeach President  Trump, saying he thinks it is “bad for democracy.” Instead of impeaching without an “airtight case,” Swalwell said his hope is that Trump is voted out at the ballot box. (Breitbart)

In response, Demonrat billionaire Tom Steyer (see “Tom Steyer: The man behind the $20M impeach Trump campaign and his strange ‘walnut sauce’ email“) announced he will be hosting a “Need to Impeach Town Hall” at the Casa Real at Ruby Hill Winery in Pleasanton, CA, on April 23. Steyer said the town hall is intended to urge Swalwell to push to start House impeachment proceedings against President Trump.

The news article of the town hall on Patch elicited an unprecedented (for Patch) number of comments, nearly all of which are from Swalwell’s 15th congressional district, which covers most of eastern Alameda County including Castro Valley, Dublin, the northern part of Fremont, Hayward, Livermore, Pleasanton, Sunol, Union City, and parts of Contra Costa County, including San Ramonand a portion of Danville.

Here are the comments:

Bobbi Fleckman, Castro Valley: “MAGA! TRUMP 2020!! Swalwell, you are nothing but an embarrassment. You and your anti-American, progressive socialist cronies have ruined CA.”

Anneke, Castro Valley: “Why doesn’t Swalwell save his breath and time and do something that actually benefits the people in Alameda County? Why doesn’t he help solve our homelessness issues? Help with the high cost of housing? Help us get money to repair our roads and freeways? Why? Because it’s much easier to get in front of a microphone or on TV and bloviate against Trump than it is to actually solve some problems.”

Mark, Danville: “I read the headline and thought it was about impeaching Swalwell… was going to sign up.”

Bret, Dublin: “Was very happy to see the responses here. This is an absolute joke. Steyer must have money to burn, because this will amount to exactly zero. Swalwell continues to be an embarrassment to himself and D15. On a positive note, if he jumps on board with this whack job, it will destroy his chances of winning the Dem spot for 2020.”

Joanne Duncan, Livermore: “Would love to see Maga hats there! What a croc!”

Tina Brown, Livermore: “I will not be there! I love My President!”

J Cota, Livermore: “who is this Tom Steyer billionaire socialist who wants to keep minions under him and his SF cartel … We LOVE our President! I’ll be there PROTESTING your socialist indoctrination along with my Patriot friends!! #MAGA”

Karin Smith, Livermore: “This is the dumbest thing ever. Honestly, I think Swalwell should just resign for considering something so stupid. Get over it, people. You’re acting like children. Boo hoo. We had to deal with 8 years of obama. I’m not even a big fan of Trump, but I sure do like my pocket book right now–much better than how obama destroyed the economy. GROW UP!!”

Rolland, Pleasanton: “We need to Impeach Eric, He has done nothing but cause problems.very dumb.”

Bruce Brogden, Pleasanton: “Yes, I agree impeach Swalwell. I voted for Trump and will again. He is not impeachable. Beside impeaching a president does not remove him from office (i.e. Bill Clinton). It only limits their power. I also don’t think The Patch should be used to advertise tyranny.”

Trooper2, Pleasanton: “Outside Alameda County no one has even heard of him and he says the stupidest things just for the publicity. Hope you are reading these comments Mr Swalwell!”