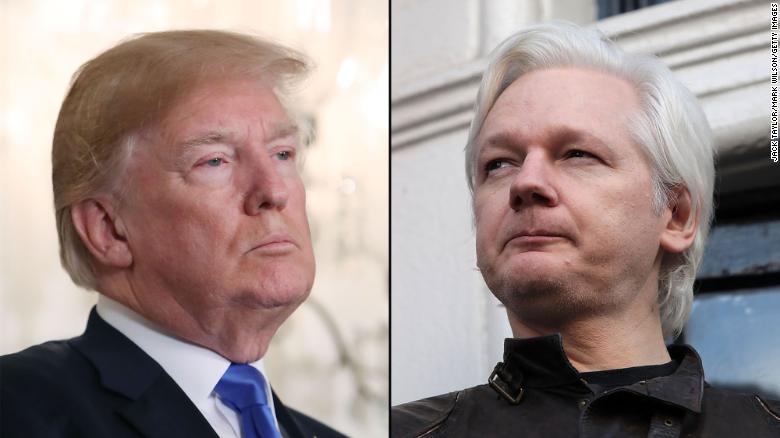 Donald Trump is lying to America about ‘knowing nothing about WikiLeaks’.

If you prefer to give him the benefit of the doubt, you can still not deny he is not telling “the whole truth.”

I voted for Donald Trump.

I have been mostly supportive of President Trump to this point and will likely continue to support him and MOST of his policies. But I can not support him in a lie.

Trump does not walk on water. Only one Man did that.

I am not one to support my candidate in everything they do or say. No human deserves a pedestal like that.

I believe we are responsible to choose the best candidates we can and then hold their feet to the fire.

Even the best politicians tend to be a little bit slimy. I’m sorry if that hurts the feelings of the Trump worshippers, but Donald Trump is lying and needs to acknowledge that he knows damn well what WikiLeaks is and what part Julian Assange played in his election.

On Sunday, Sarah Sanders claimed that President Trump was making a joke when he said, “I love WikiLeaks” in 2016, as she appeared on Fox News Sunday.

White House press secretary Sarah Huckabee Sanders said Sunday that President Trump was “making a joke” when he said during the 2016 campaign that he loves WikiLeaks.

Despite making a number of past comments in favor of WikiLeaks, Trump said last week that he knows “nothing” about the organization.

“Clearly the president was making a joke during the 2016 campaign; certainly we take this serious,” Sanders said on Fox News Sunday.

After Assange’s arrest on Thursday, President Trump was quoted as saying, “I know nothing about WikiLeaks. It’s not my thing. I know there is something having to do with Julian Assange, I’ve been seeing what happened with Assange, and that will be a determination mostly by the Attorney General… I know nothing really about him, it’s not my deal in life.”

You sure talked a lot about something you know nothing about during the 2016 presidential campaign Mr. President.

I would be one to entertain the idea that Trump is really oblivious to WikiLeaks and Assange if it weren’t for the facts being strongly against him in this matter. Do you know that candidate Donald Trump mentioned WikiLeaks at least 141 times in the last month of his campaign?

I hate using an MSNBC video as a source for anything. That might be the last network I’d ever use as a source. But sometimes even the village idiot is right, and this is one of those times.

Cut the crap President Trump. Your base is waiting to hear the truth. If you think that Assange needs to be prosecuted because of his dealings with Bradley (I will not call HIM Chelsea) Manning then tell us that and state your case.

Don’t act like you do not know who Julian Assange and WikiLeaks are.

Even your most loyal supporters know you are lying Mr. President. We get enough of that from the liberal “fake news” media.

We do not need it from you.

Mike Adams wrote a wonderful opinion piece after Assange’s arrest, theorizing that Assange was arrested at the behest of the Deep State. The Deep State will try to link Trump and Assange by coercing confessions out of Assange and then tie it all to the dis-proven Russian collusion scam, and thus… TAKE DOWN TRUMP:

ANALYSIS: The arrest of Julian Assange was actually triggered by DOJ AG William Barr telling the world that yes, Obama’s deep state operatives spied on Trump campaign officials. Now, the deep state is in a total panic, and they are pulling out all the stops to try to frame Trump and derail the DOJ investigation that will reportedly lead to criminal indictments by June.

Those likely to be indicted include Peter Strzok, Lisa Page, Andrew McCabe, John Brennan, James Clapper and many others who attempted to carry out treason against America, as President Trump stated today. They attempted a coup; they got caught; and now they are going to face the legal consequences of their lawless, criminal actions. (The entire left-wing media was also part of this criminal conspiracy against America… will the fake news journo-terrorists ever face arrest for their role in the plot?)

But the deep state isn’t dead yet. They still run large groups of operatives inside the State Department, the FBI and even the DOJ. And traitorous globalist criminal Barack Obama sits on top of all these groups, running “the resistance” from his command bunker near the Capitol in D.C. Make no mistake: Obama is behind the arrest of Julian Assange, and the gambit here is to pressure Assange to fabricate accusations that implicate President Trump in the “Russia collusion” hoax that has already imploded.

Though I believe Adams’ assessment to be on the money, I did not vote for a President that would keep bending to the Deep State, or that would duck them and try to hide.

I voted for, what I believed was, a President that would finally shoot straight with and stand up for the American people.

I’d rather see Trump go down with the ship than have him lie to us.

Many of us will have his back now, just as we always have, but not if he totally ignores his base.

Again, we get enough of that from the liberals.