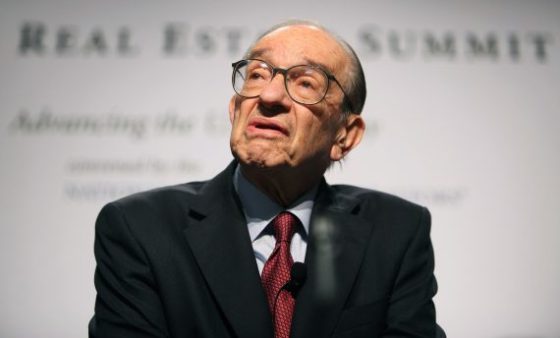 Former Federal Reserve chairman, Alan Greenspan issues a warning about the United States’ inability to curb their entitlement spending. Greenspan says that the economy will “fade very dramatically” because of the burden of the socialist policies already in place: entitlements.

Many economic analysts have been warning about the level of spending on Ponzi schemes such as social security and other government handouts for decades.  But whether Americans want to believe it or not, reliance on the government should be culled and for their own good.  People lose the will to even want to do better in most cases when a check is handed to them because they exist.

Retirement is a Myth: The American Dream Turns Into a Nightmare

In an interview with CNBC, Greenspan finally said what needed to be said and those shocked by this claim were the one who needed to hear it the most.  The government is $22 trillion in debt.  The gravy train will derail at some point. Economic growth won’t last as the U.S. labors under the burden of growing entitlement programs, former Fed Chairman Alan Greenspan tells CNBC. All this as communists call for “Medicare For All” a massive program full of heavy taxation, tyranny, control, and of course, entitlements.

The long-time central bank chief repeated his warnings about the weight that Social Security, Medicare, and other programs are having on what has otherwise been “solid gains over the past few years” according to the media’s talking heads.  “I think the real problem is over the long run, we’ve got this significant continued drain coming from entitlements, which are basically draining capital investment dollar for dollar,” he told CNBC’s Sara Eisen during a “Squawk on the Street ” interview. “Without any major change in entitlements, entitlements are going to rise. Why? Because the population is aging. There’s no way to reverse that, and the politics of it are awful, as you well know,” Greenspan added.

Of course, mainstream media pundits brushed off Greenspan’s warning because a few economic data points have turned slightly positive lately. However, even Greenspan, who infamously said the government will never run out of money and default on the national debt because they can just print more, put them back in their place.  He said that the little improvement we have experienced has come from a rise in stock market prices, not a rise in personal wealth. He sees a “stock market aura” in the economy. A rise of 10 percent in the S&P 500 corresponds to a 1 percent real GDP increase, he said. And while the S&P 500 has risen nearly 16 percent in 2019 and is on track for its best performance in history should current trends hold, there are other economic concerns that should not be ignored.

Economic Slowdown Confirmed: Here Are 14 Very Alarming Numbers That Reveal The Current State Of The Economy

Greenspan also cited the effects of economic weaknesses around the world thanks to governments worldwide seeking more control over spending. The economy “is going to begin to fade out because Europe is not doing well and we still have a problem where there’s a very substantial fiscal problem associated with entitlements.”

The best way to prepare for a financial crisis or an economic crash is to rely on yourself.  Become self-sufficient. Don’t rely on debt or the government to give you anything.  Take responsibility and work toward financial freedom.  Entitlements are not freedom.  Even slaves in the south were given rations (food stamps) and housing (section 8).  Just because the oppressor gives you something, doesn’t mean that you are free.

As far as Americans go, there is no need to enslave the body, because their minds are already shackled to the cult of government.

How To Best Prepare Yourself For The Coming Financial Crisis

The only way governments maintain their grip on power is by stealing money, spreading it across bureaucracies, then giving a pittance back to those who demand money for work they haven’t completed. Without the ability to steal, without people believing some people have rights other mere mortals do not, governments crumble. And no human has the moral right to steal from another human regardless if they slap the label “government” on themselves. Governments are the worst violators of human rights in history and have been killed in historic numbers as evidence of that fact.

Paris Tax Revolts: The World Begins To Realize The Truth About Government