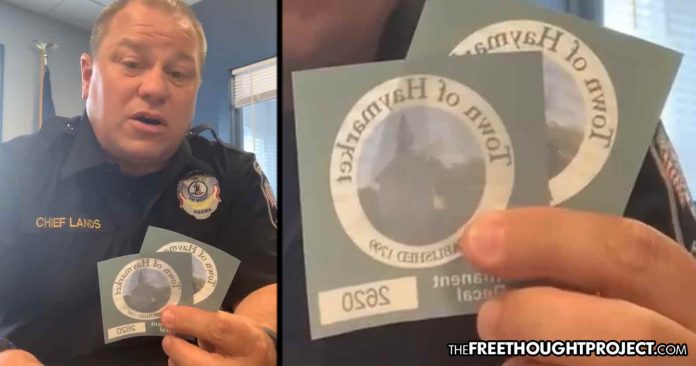 Haymarket, VA — Common sense, among those who work inside the state, is a rare commodity. Agents of the state, like those who work in law enforcement, often become so blinded to reality by ‘just doing my job’ they throw logic and reason to the wayside, choosing authority and force instead. Nothing highlights this blind order following quite like the Haymarket police department in Virginia enforcing the requirement for citizens to purchase a $15 sticker for their vehicle and promising to steal their money if they do not comply.

The vehicle stickers are part of a new extortion program rolled out by county officials in Haymarket. The sticker is not an inspection sticker to prove that your lights and horn work, it is entirely arbitrary and designed solely for revenue collection purposes only.

Haymarket police chief Kevin Land took to Facebook this week to warn the citizens that his officers — instead of solving and preventing crimes — will be patrolling the streets to extort people for not having this sticker.

The chief threatened the citizens with a $35 fine if they do not have a sticker. He then said that if the citizens choose to bring that ticket into the department and buy a sticker that he would “forgive” their debt. However, Land said that if “you don’t do that, within two weeks, we will take other corrective actions against you.”

What these “corrective actions” will consist of is not entirely clear. However, police officers have only one tool to enforce the “law” and that is the escalation of force. If citizens do not submit to this extortion, they can and will be kidnapped, caged, or killed.

Chief Land posted the video to Facebook which has received over 600,000 views since Saturday. The video received over 8,000 comments, most of which are calling out the department for enforcing such arbitrary extortion.

When residents asked why they needed to purchase the sticker, the department had no response and said they are merely enforcing the law.

“What benefits does this sticker give me? Why is it $15? I don’t want a sticker, why am I required to have a sticker? What is its purpose other than generating $15 in revenue to the city per vehicle?” asked one resident.

The department responded with the typical police response akin to “just doing our jobs.”

“You would need to refer those questions to the town leaders. We did not make the ordnance, we are only tasked with enforcing it,” the department stated.

“So you guys would have rounded up escaped slaves or Jews in Germany?” one Facebook user wrote in response to the “just doing our jobs” statement.

Indeed, they are correct, as millions of innocent lives have been brought to an utterly horrifying and violent end by people just doing their jobs.

Other Facebook users pointed out the fact that there are unsolved crimes in the county and noted that instead of solving those crimes, police will be robbing citizens.

“Haymarket currently has two open missing person cases, and a number of ongoing burglary investigations. But a sticker is what the cops are focused on. What a joke of a department,” wrote a Haymarket resident.

What this incident illustrates is the nature of government and its enforcers. The government needs money to sustain and enrich itself so it simply makes up laws to generate that money.

In order to force people to pay them, they will threaten them with the possibility of kidnapping. If these innocent human being resist being kidnapped for choosing not to pay this government, they will be executed. And all of this extortion, kidnapping, and killing is referred to as the law. As you watch the video below, remember that legality most certainly does not equal morality.