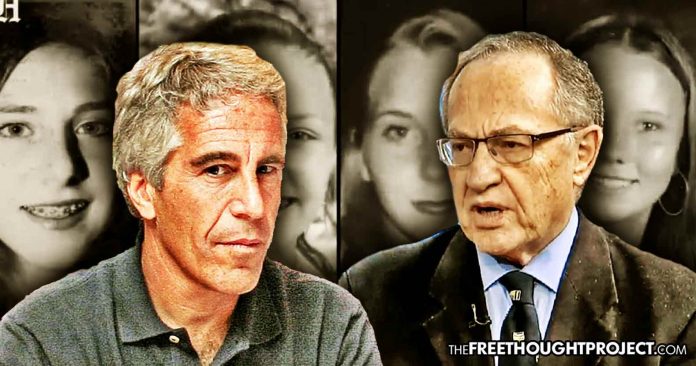 Alan Dershowitz is a prominent attorney in the United States with a history of representing both accused and convicted wealthy sex offenders. Some of his high-profile cases include defending convicted billionaire pedophile, Jeffery Epstein and accused Hollywood rapist, Harvey Weinstein.

Dershowitz was a member of Epstein’s legal defense team when he was given a sweetheart deal by then U.S. Attorney Alex Acosta—now Trump’s Labor Secretary—and sentenced to just 13 months in work release despite the mountain of evidence against him.

As TFTP has reported, Epstein is a convicted child molester and sexually abused no less than 40 underage girls. Despite this fact, Acosta protected him while serving as a U.S. Attorney in Florida. Dershowitz played a huge role in the deal.

Now, after multiple revelations have come to light, a new victim has gone public in the Epstein case, filing a sworn affidavit in federal court in New York on Tuesday.

Maria Farmer swore to the court that while she was employed by Epstein, she frequently saw “school-age girls’’ wearing uniforms come into the mansion and go upstairs. Farmer also claimed that she and her then-15-year-old sister were sexually assaulted by Epstein and his companion, Ghislaine Maxwell.

Farmer said she reported the abuse to both the FBI and the NYPD when it occurred in 1996, but neither agencies acted.

“To my knowledge, I was the first person to report Maxwell and Epstein to the FBI. It took a significant amount of bravery for me to make that call because I knew how incredibly powerful and influential both Epstein and Maxwell were, particularly in the art community,’’ she wrote, noting that she was an art student at the time.

Farmer’s affidavit is now part of a move to go after the man who defended Epstein and who is also accused of partaking in the child sex trafficking, Alan Dershowitz.

Farmer’s affidavit is one of 15 exhibits attached to a defamation complaint filed in federal court in the Southern District of New York by Virginia Roberts Giuffre, one of Epstein’s victims, against Alan Dershowitz, one of Epstein’s most vocal and powerful attorneys.

Giuffre claims in the lawsuit, as she has in past court filings, that Dershowitz, 80, knew about and participated in a sex-trafficking operation involving underage girls and run by Epstein and Maxwell, and that she was forced to have sex with Dershowitz and other prominent, wealthy menwhen she was underage.

“No sensible person looks forward to litigation,’’ Giuffre said in a statement. “And I know that standing up for myself and others will cause Mr. Dershowitz and Mr. Epstein to redouble their efforts to destroy me and my reputation. But I can no longer sit by and not respond. As my complaint shows, my abusers have sought to conceal their guilt behind a curtain of lies. My complaint calls for the accounting to which I, and their other victims, are entitled.”

Indeed, even the court has found that this case has been engulfed in lies. As TFTP reported, a federal judge made a bombshell ruling which stated that the prosecutors who worked under former Miami U.S. Attorney Acosta broke the law when handling the case.

According to the ruling, the prosecutors acted illegally when they concealed a plea agreement from more than 30 underage victims who had been sexually abused by the New York hedge fund manager.

“Virtually everything in the complaint is false, and I will be able to disprove all of this in a court of law. I have told the truth throughout and I’ll be able to prove it. … I never met her, I never heard of her,’’ Dershowitz said in response to Farmer’s affidavit.

It is quite hard to believe him though, especially considering the fact that as more and more truth keeps coming to the top, those involved keep trying to muddy the waters.

As the Herald points out, “in recent months, Dershowitz has waged a public relations war against Giuffre, her lawyers and the Miami Herald, which published a series of articles about Epstein in November. The series, “Perversion of Justice,” focused on how the former U.S. attorney in Miami, now Labor Secretary Alexander Acosta, brokered a non-prosecution deal giving Epstein federal immunity, despite overwhelming evidence that he had sexually assaulted dozens of girls.”

Those who make a living from defending convicted pedophiles and smearing those who question their motives most assuredly deserve scrutiny. Hopefully, as more and more evidence and pressure continues to mount, we will see some justice for these victims.