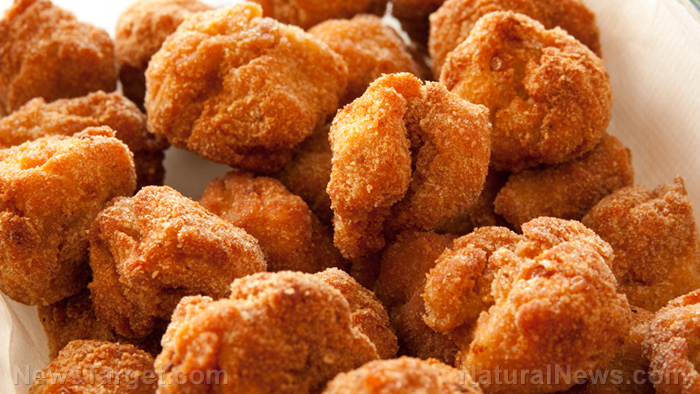 (Natural News) A few years back, food companies were forced to recall thousands of pounds of their chicken nugget products after people started reporting about finding bits of plastic in their bite-sized foods. The crisis has repeated itself anew, but instead of pieces of plastic, the processed food has somehow been contaminated with chunks of wood.

The U.S. Department of Agriculture (USDA) recently announced that Perdue Foods was recalling more than 68,000 pounds (30,844 kg) of chicken breast nuggets sold under the brand “Perdue SimplySmart Organics.” The UPC product bar code of the recalled product is 72745-80656 – it was made in October 2018 and bore an expiry date of October 25, 2019.

The affected processed food product is proudly advertised as having been made from the meat of organically raised chickens. The chicken nuggets are also supposedly free of the potentially harmful protein called gluten, which is very difficult to digest and may therefore cause health problems in the intestine, such as celiac disease. (Related: Tyson Foods recalls over 130k pounds of chicken nuggets after plastic contamination scare.)

In the USDA statement, Perdue initiated the recall of the product after getting complaints from several consumers who discovered pieces of wood in the chicken nuggets they were chowing down. Another separate complaint made its way to the Food Safety and Inspection Service of the USDA.

Of the 50,000 packages Perdue is recalling, the company believed that only a small number would actually contain wood. However, it was better to be safe than sorry.

“Out of an abundance of caution, we have decided to recall all packages of Perdue SimplySmart Organics Gluten Free Chicken Breast Nuggets produced during the same product run,” explained Jeff Shaw, the company’s vice president for quality assurance.

As of the time of this writing, no one has been reported injured by wood pieces found inside chicken nuggets.

Processed foods have a history of getting contaminated with dangerous objects

Pieces of wood and plastics are not the strangest or most dangerous things that have gotten inside processed food. The year 2017 alone witnessed two similar incidents in the same month.

In April 2017, McCain Foods USA pulled some of its popular hash brown products from the shelves of nine states and Washington, D.C. The reason for this? Pieces of golf balls had been found in some of the hash browns. Maybe someone was playing miniature golf in the factory during break time.

During that same month and year, Fresh Express also recalled one of its salad products. The pullback stemmed from a customer finding unexpected, unasked-for, and very unappetizing meat in the form of a dead bat.

Chicken nuggets in particular are very prone to contamination. In 2013 and again in 2015, Tyson Foods recalled thousands of pounds of chicken nuggets. Both instances were prompted by pieces of potentially dangerous plastic in the processed food.

And in 2014, Applegate Natural and Organic Meats recalled more than 15,000 pounds of its organic chicken nuggets after customers reported finding small pieces of clear plastic in the processed food. The contaminated product happened to be co-packed by Perdue, the same Georgia-based company that is currently pulling its nuggets from groceries.

The only bright spot about this is that Applegate didn’t wait for the USDA to tell it to recall the tainted product. As it stands, it would be safer for people to drop chicken nuggets from the menu and just cook fresh foods.