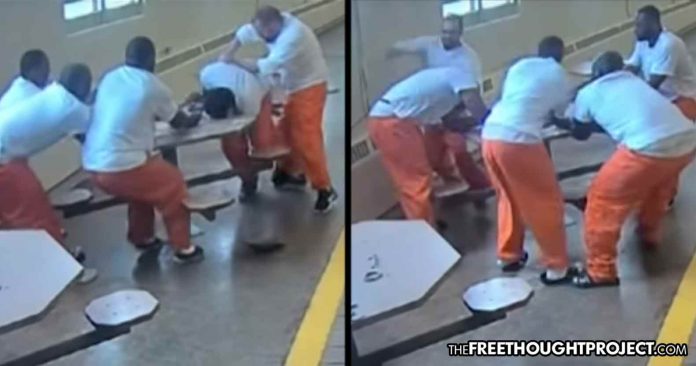 Cincinnati, OH — In one of the most disturbing videos the Free Thought Project has ever reported on, four black men were chained to a table in Lucasville prison while a single white man was allowed access to a knife and brutally stab them. The graphic and hard to watch video is now the subject of a federal lawsuit filed earlier this month in the Southern District of Ohio.

The two officers, identified only by their surnames, Faye and Dalton, laughed as four inmates were brutally stabbed in June of 2017, according to the suit. The cornerstone to the lawsuit is the surveillance video showing the horrifying event unfold as four men played cards only to be repeatedly stabbed by a psychotic and violent white supremacist.

Shamieke Pugh and Maurice Lee are the plaintiffs in the lawsuit which is seeking a modest $75,000. The suit claims the victims’ civil rights were violated, including that they suffered cruel and unusual punishment because of the prison guards’ inaction.

According to the lawsuit, as reported by USA Today:

Pugh, Lee and two other black inmates were strip searched before they were allowed out of their cells for recreational time. They were then handcuffed to a table.

But Greg Reinke, who pleaded guilty in the attack, was not strip searched before he was cuffed to an adjacent table.

Reinke is identified in the suit as a member of the Aryan Brotherhood, a violent white supremacist group.

Guards “gave Reinke a key” or “knew or should have known that Reinke” had a key or device to unlock his handcuffs.

Faye and Dalton, the guards, stood nearby behind a locked door and “laughed as Mr. Pugh, Mr. Lee and the other inmates were stabbed.”

Two of the inmates suffered several stab wounds and heavy bleeding while the other two sustained minor injuries.

After one victim escaped his cuffs and tackled Reinke, guards pepper-sprayed the victim and not Reinke.

The guards, including a sergeant identified as John Doe, did not immediately render aid to the victims, and 10 minutes passed before nurses arrived.

As the men are bleeding from their stab wounds, one of the guards says, “We should just let them die.”

The idea that four black men would be strip searched to make sure they had no weapons and chained to a table while a white supremacist — with a history of stabbings — would be unchained right next to them, and allowed to initiate such a horrifying attack, should shock the conscious. Equally as disturbing is the idea that the corrections officers would laugh as these men were stabbed to death.

Both inmates in the suit were in jail that day for nonviolent offenses. However, their “rehabilitation” proved violent enough to forever change them.

While the savage nature of this attack is certainly horrifying, cops laughing as inmates die is anything but isolated. As TFTP previously reported, a mother filed a lawsuit after video showed her Army veteran son suffering an agonizing last few moments of his life in a jail cell as deputies laughed at and filmed him.

In a show of transparency, Clackamas County Sheriff Craig Roberts released the video showing his deputies laugh as Bryan Perry writhes around in agony in his cell. After thrashing and moaning for hours as deputies and medical staff neglected and laughed at him, he was taken to the hospital where he was pronounced dead.

Perry’s family has now filed a lawsuit against the department and medical staff, who they say failed to property treat him on that November day in 2016.

Roberts said in a statement that “The laughter, substance, and tone of several comments heard from my employees in that video were inappropriate, and do not conform to our professional standards.”

Perry, 31, had served in the Iraq War, was honorably discharged, and received a Purple Heart. Sadly, he would come back home to the country he nearly gave his life for, who would finish him off. A travesty indeed.